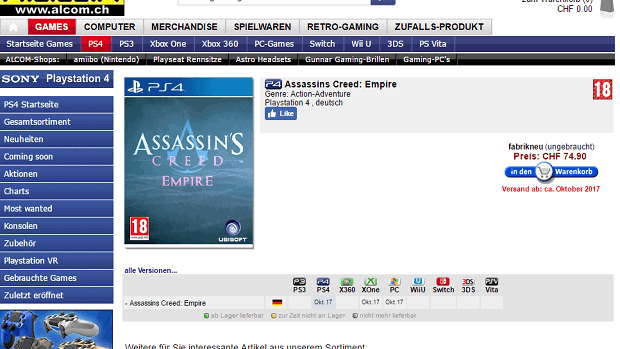 Recently a couple of foreign retailers have listed Assassin’s Creed: Empire for sale from October-November 2017. The game is expected for release on Play Station 4, Xbox One and PC but no Nintendo Switch version is under development. So bad news for Switch users again.

The Latest Assassin’s Creed title is rumoured to be taking place in Egypt, hence the title Empire is fitting. Further details of the game are unknown and the developers of the game Ubisoft have yet to make an official announcements.

The last title Assassin’s Creed: Syndicate was released in October 2015 and the fans have been eagerly waiting for the next instalment , The previous titles have not earned praise for their modern approach and were full of bugs and did not introduce anything new worth mentioning.

After Assassin’s Creed: Black Flag the players have gotten familiar with the mechanics of the game and expected something new but Ubisoft failed to deliver and the franchise has fallen in popularity.

Assassin’s Creed: Empire has gotten our hopes up since it is expected to take place in Egypt and this gives the players a chance to explore the ancient civilization, this will hopefully introduce some new mechanics, gear, assassination techniques and weapons.

We eagerly wait to see which assassin we will take control of this time and since it is the ancient time we expect him to be more dedicated towards his goals like his successors Altair and Ezio.

Assassin’s Creed: Empire might finally give us answers to some of our questions like how the assassin’s code came to be? Who was the first assassin? Since the oldest assassin we know is Aquilus from 259 CE and Egypt’s history goes back way before that, So the chances are great that our assassin might be one of the very first of his time. Imagine that!

All of this yet remains unclear and we have to wait patiently for Ubisoft to make an announcement but still having a date to look forward to make it easier.