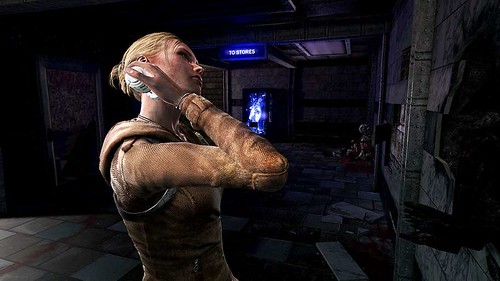 Lexis Numerique, one of the biggest independent studios in Europe, is cooking up two downloadable titles, Red Johnson’s Chronicles and AMY. Out of the two, the latter seems to be catching more eye than the former. Why? Because it has zombies, it has little freaked out kids, it has darkness and terror; all the things which pique our interests.

It also features two female protagonists and more importantly, some fascinating gameplay concepts. Main protagonist Lana is an ordinary 20 year old female minding her own business while traveling in a train in a fictional city called Silver City, when all of a sudden a meteorite hits the zone.

Somehow, Lana survives the blast, waking up to find out that everything around her is in ruins, and all the people of Silver City have turned into zombie-like monstrosities except one – a little girl called Amy. The zombies, or whatever synonym you wish to use for them, are termed as being ‘enraged’, which probably suggests they won’t be slow and foolish like typical zombies. 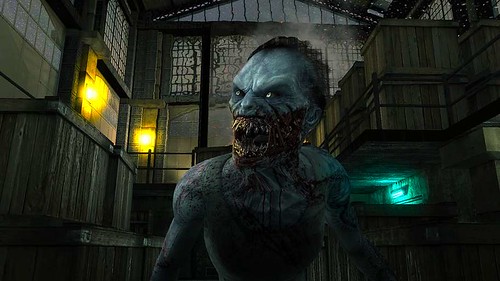 To add to the cruelty of nature, Lana finds out she is infected, the only thing keeping her human is Amy, who appears to be immune to this ‘viral’ infection. Now Lana, with Amy’s assistance, must try to find a way out of these dire circumstances by whatever means necessary.

It may sound similar to Resident Evil, but the mechanics of game are based on stealth and tactical survival. Instead of blasting zombies to smithereens, Lana and Amy have only each other to survive against hordes of monstrous abominations.

Lana must also use her infection to her advantage; when she is distanced from Amy, her skin begins to decay and her eyes sink in, slowly transforming her into a zombie, with which she can ‘blend’ in with other zombies without them being hostile to her.

This transformation is also accompanied with hallucinations and difficulty in controlling Lana. However, if she stays too long in this zombie-mode, it will kill her.

On the other hand is Amy herself, who is as frightened as any other kid would be in such a situation. Amy has a lamp and can use her size to her advantage. She can access very small areas through which an adult like Lana wouldn’t fit.

The lamp’s intensity can be varied, so if lots of light is needed, it can be turned to full blast, and if there is the danger of some zombie spotting you, you can dim it.

Zombies and two girls with huge age differences aren’t the only friendly folks you get to see in Silver City. The government, like almost always, decides the military should get involved in the entire incident.

The military can be both good and bad for Amy and Lana; if Lana is perfectly alright, the military guard her and Amy from zombies. 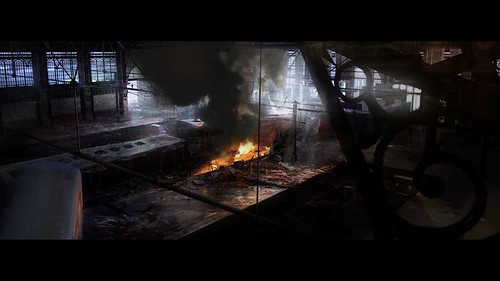 However, if she is distanced from Amy, and is slowly transforming, the military attempts to shoot her down. The player must balance the usage of her zombie-transformation ability to survive different situations. Sounds a lot like Amnesia: The Dark Decent, doesn’t it?

Another noticeably attractive feature is Amy’s tendency to become scared. While Lana is holding her hand, the controller will vibrate, and the intensity of the vibration will indicate to what extent Amy is scared.

In fact, not only does holding her hand indicate the fear-factor, it cures Lana of any type of transformation that has occurred recently, and also restores her sanity.

It’s an Ico styled touch that serves a very good purpose. Apart from Amy, players can also seek out medical kits and use them to heal Lana.

But the other more impressive feature is the visuals and physical behavior of the characters. The texture details are fantastic, on par with the latest and better looking games.

Amy (The Game) really looks phenomenal, but its true physical beauty lies in the realistic body language of the characters. Amy’s fear is reflected by her subtle movements, which have been crafted in very accurate ways.

Each step she takes has a strong emission of nervousness and doubt, and you’ll occasionally see Lana gently tugging Amy forward. Amy will even freak out once she sees corpses or similar horrific sights, hence refusing to move, and Lana will have to do the dirty work of clearing her way.

The story may not be too overwhelming, but seeing how much effort has been put in the gameplay, AMY definitely has a lot of potential. The game looks to combine the goods from many other famous survival horror games, such as Resident Evil, Silent Hill, and Amnesia: The Dark Decent, with a bit of Ico in it too.

If things keep up the way they are, this game should be more than just a memorable survival horror experience.