Alex Brand Will Return For Gears 5, But Not At Launch

With barely a week to go before release, The Coalition has confirmed (more or less) that sergeant Alex Brand will return for Gears 5. However, it doesn’t seem like that she will have a part to play in the narrative. According to studio head Rod Fergusson, she will find her way into the new installment sometime post-launch. 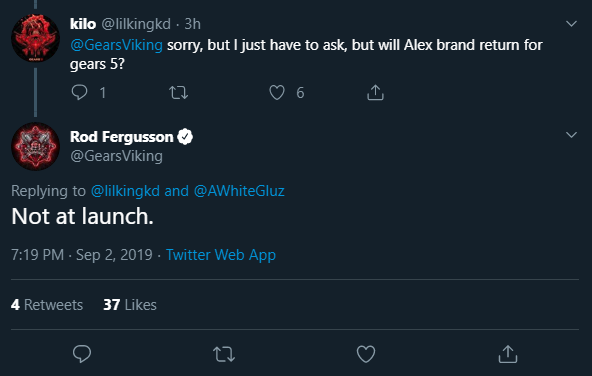 For those unaware, Alex is a popular character from the Gears of War comic books. She has never appeared in any of the games so far. Well, technically, she did make an appearance in Gears of War: Judgment but as an exclusive pre-order multiplayer skin. She was originally planned to appear in Gears of War 3 but that failed to happen, which is disappointing to say the least.

Alex is one of the more interesting characters in the Gears of War lore. She definitely deserves an act within the main campaign of Gears 5 provided that the developer has her in the pipelines. Unfortunately, it does seem like Alex will once again be making an appearance as a multiplayer skin. Do note that The Coalition has abandoned the traditional season pass for Gears 5. Instead, the developer will be focusing on a system of additional content that is light on additional charges and heavy on free unlockables — basically multiplayer. Hence, you can pretty much rule out story expansions at this point.

There’s still hope of Alex coming out of the comic books. With Gears 5 focusing on Kait Diaz as the lead female character, The Coalition may expand this courtesy to Alex in the future, who is another prominent female character in the Gears of War universe. She was one of the few female soldiers serving on the front lines before the Locust War, and assigned to Foxtrot four months after the Lightmass Offensive. She has fought several battles in the timeline during the Lambent Pandemic.

Gears 5 is the largest installment in the franchise to date with the largest campaign ever created. Everything has been designed in terms of scale, but without comprising the storytelling.

Gears 5 is scheduled to release for Xbox One and PC on September 10, 2019. The installment is part of Microsoft’s Xbox Play Anywhere initiative, meaning that you can purchase the game on one of the two platforms and still play on the other. You can also start playing earlier than the rest by becoming an Xbox Game Pass Ultimate subscriber. There’s a fantastic deal going on right now where you can pay only $2 for two months and start playing on September 6, 2019.