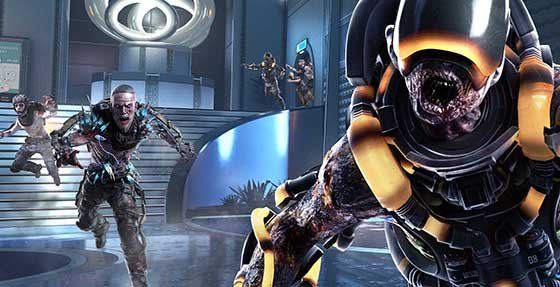 This guide contains step-by-step instructions on how to complete the Descent Map Easter Egg in Call of Duty: Advanced Warfare Reckoning DLC.

Step #1 – Terminal Area
In the Tidal Generator area, shoot 3 bolts until you see a blue light on the top of the walls. Turn on all 3 blue lights to open up the Mark-25 Upgrade Station.

Step #2 – Underwater Goliath Switch
Start by depressurizing the Floodable Air-Lock door. You should then proceed to The Trident Retreat’s Welcome Center to obtain an Exo-Goliath suit.

After acquiring the suit, head downward from the shaft that reads ‘Please Watch Your Step’ and proceed to the Promenade.

After arriving at the Promenade, head up the stairway and drop down into the aquarium-like area. After dropping down, follow the path on the right-hand side to make your way to the lounge.

Once you again arrive at the Floodable Air-Lock area, open up the door and head inside to let the water rush in.

Head underwater and continue to follow the path lighted by red bulbs. Interact with the button to turn on the blue lights which will open up a door to the Mark-25 Upgrade Station.

After opening up the door, retreat to surface and wait until Oz gives you The Drone Challenge

Step #3 – Drone Challenge
In order to complete the challenge, you need to destroy 5 drones hovering in the sky the map. The challenge can easily be completed by not going after zombies and focusing your attention on the drones.

It is highly recommended not to fail the challenge and using CEL-3 Cauterizer to complete it easily.

If you, somehow, fail to complete the challenge, you will have to start it again on the next round. You will know if you have successfully completed the challenge by a green-colored message appearing on the screen.

Step #4 – Charging Bomb Station
After completing the Drone Challenge, an area at the Concierge contains a bomb charging station near the Galleria Entrance will open up. The only way to power up the station is by electricity. The idea is to let an electric-charged zombie hit you while you are standing in front of the station.

Therefore, put down all zombies while standing in front of the station, but let the electric-charged zombies hit you.

However, do note that letting an electric-charged zombie hit you will deprive you off your exo-abilities for a while so make sure to run away after getting hit once and repeat the process.

Step #5 – Grenade Challenge
The only thing you need to know about the challenge is that you are not allowed to use your guns. For the sake of completing Grenade Challenge, it is better to buy Contact Grenades which come in really handy.

Step #6 – Jump Puzzle
The ‘Jump Puzzle’ requires you to head from one blue-lit platform to next using jumps and exo-boosts.

The challenge is a bit forgiving in the sense that even if you miss a jump or two, the blue-lit platform will respawn allowing you to try again until you succeed. However, make sure to keep an eye out on the zombies chasing after you.

Step #7 – Move Challenge
In the Move Challenge, you might lose money after each step so make sure to buy whatever you need before starting the challenge.

Step #8 – Simon Says Game
Once you have completed the Move Challenge, you need to head over Self-check-in at the Reception and turn on the lights on each screen in the following order – from left to right:

Since you are unable to kill the clones, it is best to avoid them and continue killing the zombies to complete the challenge.

Step #11 – Rocket Challenge
The challenge is almost identical to Grenade Challenge, but you are provided with a Mahem MK-25 Rocket Launcher with infinite ammo.

Step #12 – Final Round
Once again, head over to the Tidal Generator area and go to the Upgrade Station to and the Memory Tester Machine in order to get hold of Oz’s memory.

Accessing the memory will transport you to a location in which you will have to survive battle with the zombies without going down as there will be no reviving. The final round is pretty tough and you will be provided with 3 AI teammates should you decide to go in solo. Once you complete the challenge, you will get Reunion Achievement/Trophy.