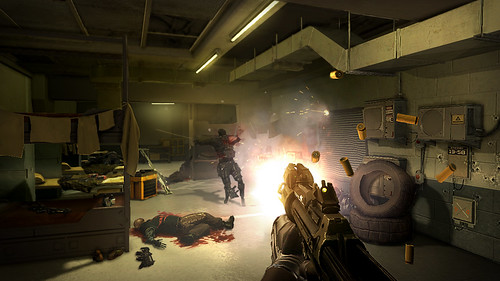 Deus Ex: Human Revolution seems to have gone all out in their attempts to try and hype up the crowds, prior to the release of the game, which is on August 23rd.

You can now enjoy thirty minutes of uninterrupted gameplay footage, that has been released, prior to the games launch and each and every one of those thirty minutes, can be found right here.

The first video kicks off with Jean-Francois Dugas, the game’s director, coming forth and giving a little back story about the game and just what you can expect from it, along with some basics on how to approach the game.

One important aspect to note here, is the fact that the footage that they are displaying is the PS3 version of the game.

The second video continues from where the first left off. We go into the crux of the game and witness some of the stealth approaches that can be used in the game, along with the many uses of the stun gun. This video also goes on to show how exploring your territory is crucially important to the game, as it helps you find new items for your inventory, as well as helping you find new routes.

The third video shows just how useful cloaking and sound suppression can be when trying to stealthy get past guards. However, more importantly, this parts demonstrates just how good the gun fights can be in the game. At the same time, the importance of different armours also comes into play and how shooting different parts of bodies and armours is going to have different responses.

Note. Don’t forget to check our Augmentations guide, for insight on the use of every augmentation in the game.

Now that you know all the core gameplay elements of Deus Ex: Human Revolution, don’t hold your opinions, sound them off in the comments below.