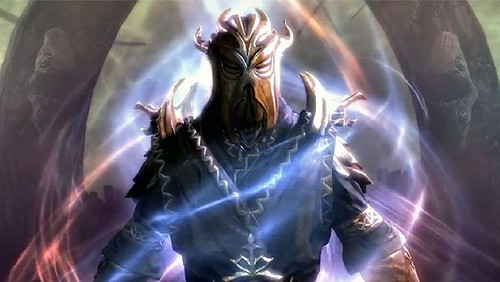 Skyrim’s new Dragonborn DLC gives you the opportunity to explore new areas, collect tons of ancient legendary artifacts, and uncover many mysteries. Among those are the Skyrim Dragonborn Deathbrand Armor and Weapons.

The Deathbrand set is a new type of light armor ideal for those who use magic (however, melee weapon wielders can get some benefits, which are discussed ahead).

This unique armor grows stronger as more pieces of the set are collected, and you can do so by initiating a specific quest for the very purpose, called Deathbrand.

Initiating the Quest
In order to start the quest, you will need to be level 38 or higher – anything below that and you won’t be able to initiate it. Secondly, you must find and read a copy of the Deathbrand book. One of the places you can find the book is in the Temple in Raven Rock.

Other places you can find the book are the Retching Netch or the Greathall of SkaalvVillage.

Once you read the book, you will get the ability to unlock Ancient Chests. If you had unlocked any of these chests (typically by lock-picking) prior to reading the book, they would have been empty.

There is also an alternate way of initiating the quest without having the need to read the book. You will have to kill the pirates guarding the ancient chest at Haknir’s Shoal.

It will spawn the Deathbrand Helm in the chest and so the quest will be initiated. You can then get the map to other locations and the book from the dead Pirate Captain.

Location:
Haknir’s Shoal, a small island in the north of Solstheim, found north of Windstone.

Location:
North of Earthstone, northwest of Raven Rock. It is guarded by two bandits.

Location:
Across a waterfall south of Bristleback Cave, near a river.

Location:
West of Tel Mithryn, in a chest along the river shore. It is surrounded by Ash Spawn.

Quest after the Armor
It’d be unwise for you to back off now and go exploring for other stuff. If you have the Nordic Pickaxe, then you can really get your hands on some gold, potions, and a set of unique Scimitar swords owned by Mr. Death-Brand himself.

When you find the last part of the Deathbrand armor set, you will also find a key to the Gyldenhul Barrow. Head over there, and you will find the corpse of a dead adventurer. There are also two sarcophagi with Stahlrim in them.

In order to proceed further, you will need to equip the Nordic Pickaxe and mine through the Stahlrim to the right to reveal a secret passage. Head down to find some treasure. As soon as you pick up any of the items, the gate behind will close.

Head further and you will find the resting place of Haknir Death-Brand. Behind him is a unique Scimitar, Bloodscythe. Pick it up, and the ghost of Death-Brand will appear. Fight him and the other enemies he spawns. Once he is defeated, loot him to find another weapon named Soulrender.

If both these weapons are equipped simultaneously while wearing the Deathbrand armor, it will give some power additional buffs, such as increasing damage done with one-handed weapons for each piece of Deathbrand Armor you have equipped, as well as giving an armor boost to make up for the lack of a shield.