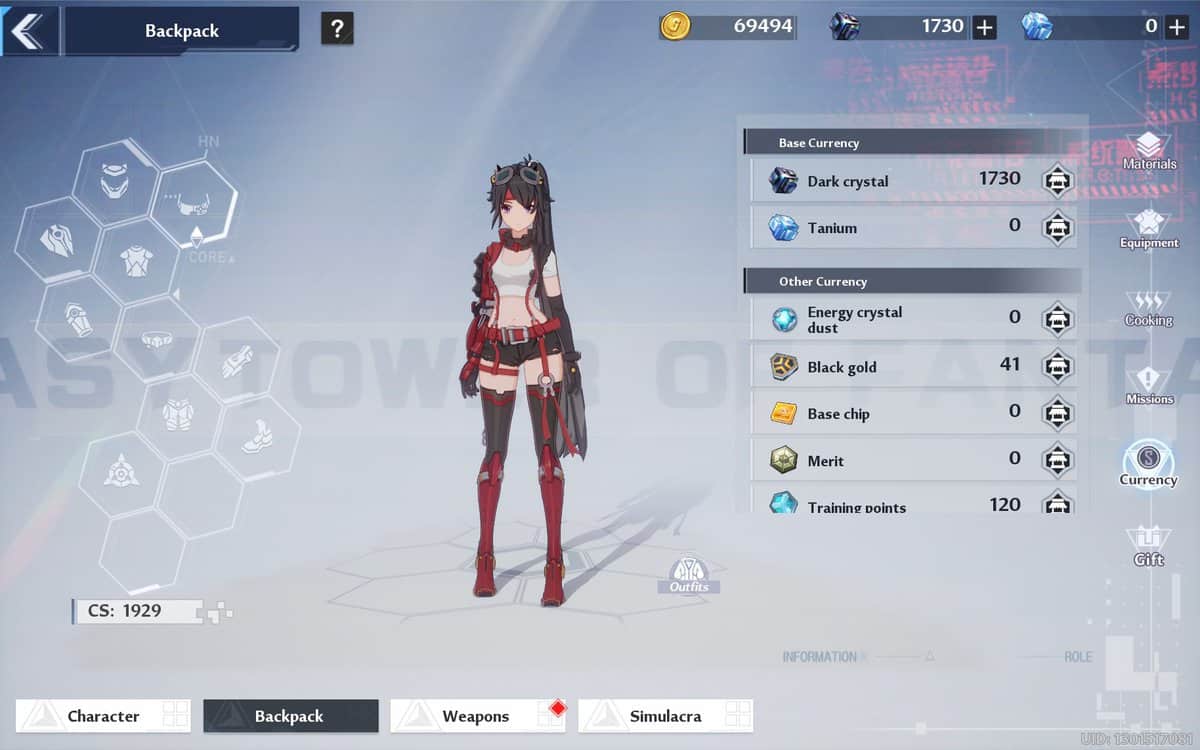 Being a free-to-play Gacha Game, Tower of Fantasy comes with a boat load of different in-game currencies that are used to buy all kinds of unique items. Due to how many unique currencies there are in Tower of Fantasy, figuring out what each currency is actually used for can get very confusing. But worry not, as we’ve prepared this guide for you which will show you the purpose of all Tower of Fantasy currencies and what you need to do to acquire them.

In Tower of Fantasy, there are nine unique types of currencies. Some of these currencies are used for similar purposes, but most of them are used to purchase unique items which cannot be bought with other currencies.

The game divides its different currencies into two types: Base Currency and Other Currency.

There are two unique Base Currencies in Tower of Fantasy: Tanium and Dark Crystals.

Tanium is the most premium currency in Tower of Fantasy. The only way to obtain Tanium is by purchasing it with real money from the store.

Once you’ve purchased Tanium, you can use it to either buy Daily Supply Boxes or trade it for Dark Crystals in a 1:1 ratio.

Daily Supply Boxes will grant you daily rewards which you’ll have to redeem by logging in every day. These supply boxes contain very valuable items and can even contain other currencies.

One thing to note is that the store only offers Tanium in bundles; the cost of which starts from $0.99 and goes all the way up to $99.99. The price of these bundles and the quantity of Tanium which they offer are listed below.

Now, if you’re trying to get the most bang for your buck, the best bundle is the $99.99 one as it offers the most Tanium per dollar spent.

Dark Crystals are very similar to Tanium as they’re also used to purchase items and other currencies (excluding Tanium) from the in-game store. However, the major difference between Dark Crystals and Tanium is that the former can be obtained through free-to-play methods.

To obtain Dark Crystals, you can do quests, defeat bosses, earn achievements etc. Ergo, you’ll naturally rack up quite a lot of Dark Crystals as you play through the game.

All of the currencies labeled “Other Currency” in Tower of Fantasy can be obtained through free-to-play methods. This means that you do not necessarily need to spend real-life money to obtain the following currencies.

But that does not mean that Gold is worthless. Despite being available in abundance, Gold is a very important currency in Tower of Fantasy.

It is used to buy different materials, consumables, ingredients and it is also used to upgrade your weaponry. Upgrading your weaponry is an extremely crucial element of the game, so you’ll need to keep farming Gold to be able to progress through the game.

If you’re low on Gold and need it ASAP, you can buy it from the store using Dark Crystals. You’ll have to spend at least 100 Dark Crystals at a time, which will grant you 10,000 Gold.

When you’re in the Special Orders menu, you’ll see that each banner requires a Nucleus Currency of a specific color to be rolled.

Out of the three Nucleus Currencies, the most common and easily obtained one is the Black Nucleus.

It can be obtained by completing quests, earning achievements and simply just exploring the world of Tower of Fantasy.

While exploring the world, you’ll come across many different interactable items and NPCs that grant Black Nucleus. For example, if you encounter a Anenome searching for Orb, find the orb for it and give it to the Anenome to get a free Black Nucleus.

Since the Black Nucleus currency is so easy to obtain, it can only be used to perform a regular Special Order. These Special Orders do not have a pity system, so you are not guaranteed to get an SR or SSR weapon even after multiple rolls.

The next Nucleus Currency is the Gold Nucleus. It can be obtained through quests, chests, Ruin Bosses and achievements. You can also buy it from the store using Dark Crystals.

The Gold Nucleus currency is used to perform named Special Orders. These come with a pity system, so you have a 100% chance to obtain at least one SR or SSR weapon for every 10 rolls.

Achievement Points are another form of currency in Tower of Fantasy. As the name suggests, you’ll earn them by completing the different achievements in the game.

There’s an Achievement Page in Tower of Fantasy where you can spend your Achievement Points to get valuable rewards.

The amusement facilities located on Cetus Island grant players Amusement Park Tickets. These tickets can be given to Enfi to get special rewards from Cetus Island.

Base and Overclocking Chips

When you draw matrices in Tower of Fantasy, you’ll get another currency named the Base Chips. These chips can be used to buy Matrix Chests from the Matrix Store.

There are several Training Stations located around the world of Tower of Fantasy. If you train at these stations and complete their objectives, you’ll be rewarded with Training Points. These points can be used to purchase gifts and XP items from the Points Store.