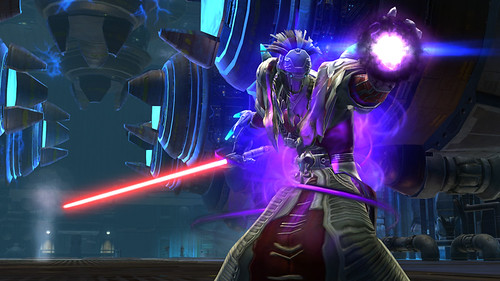 Sorcery has been the dominating ingredient in the wrath of the dark forces and if you are to join the club, by choosing Sith Sorcerer advanced class in Star Wars The Old Republic, you will need an overview of how to fit in with your newly found role. For that, I’ll be explaining the development of the Sith Sorcerer in this guide, focusing on the Skill Tree and build.

In this guide the skill distribution or builds are designated as (XX,XX,XX), XX standing for the number of points.

Now for the main part:

The Sith Sorcerer has the following specializations/trees:

The Corruption Sith Sorcerers are preventative healers with great resistance to debuffs, added speed, brilliant healing, and a good amount of damage.

The standard (32,7,2) build will obviously assist you as a healer, with so many points in Corruption. Lucidity can be very useful if multiple points are added to it, making it a great defensive ability, making your Sorcerer more rigid.

The (30,9,2) build is a very offensive one for an otherwise healer type of class. Lightning Strike will greatly benefit from this. Some people may question putting in points to make such an offensive build for a relatively defensive character, but Lightning Strike is generally a better choice than auto-attacking, particularly at higher-levels, when you have more Force than you really need.

The standard (32,7,2) build is best suited for PvP games, because with this build, you have speed, tons of heal, and relatively low CC susceptibility. Affliction will be your primary damage source, as it does a decent damage for a relatively low-cost. You will generally move faster than other players, particularly when afflicting with debuffs like 20% reduced speed.

The Lightning Sorcerer is a spike-damage striker, one with a good bit of area damage and great control in battles.

This build is the only build that really makes the Lightning Sorcerer do what it can do best, be it a PvE game or a PvP one. Critical hits will be the things to determine your prowess in battle, as they grant Lightning Effusion, which greatly reduces the cooldown of Force Speed.

When you have Lightning Effusion, prioritize Force Storm, Chain Lightning and Thundering Blast instead of Lightning Strike, Force Lightning or Affliction.

However, don’t try to use this cycle when Lightning Effusion isn’t available to you, as you’ll instantly run out of Force. Instead, under normal circumstances, try using Affliction, and then regularly alternating between Force Lightning and Lightning Strike. This way you will almost never run out of Force.

The Madness variant of the Sith Sorcerer is an extremely efficient self-healing damage output machine, if in the right hands.

The (3,7,31) build is great for quick leveling, best at low to mid-levels, but becomes a little too ordinary at higher levels. It’s best to than opt for the (0,13,28) configuration, which is a hybrid type of a build, exploiting both the brilliance of Lightning and of Madness.

However, this build hasn’t been tested too much, and if you don’t feel like experimenting, the good old (3,7,31) will do just fine.

You need multiple debuffs on your target to give you dispel protection against enemy healers, and Creeping Terror’s stun adds just that bit of control. Thus the old-school (3,7,31) should do just fine.

Don’t forget to share your specs and builds for Jedi Consular in the comments with a bit of explaining on rotation and PVE/PVP.