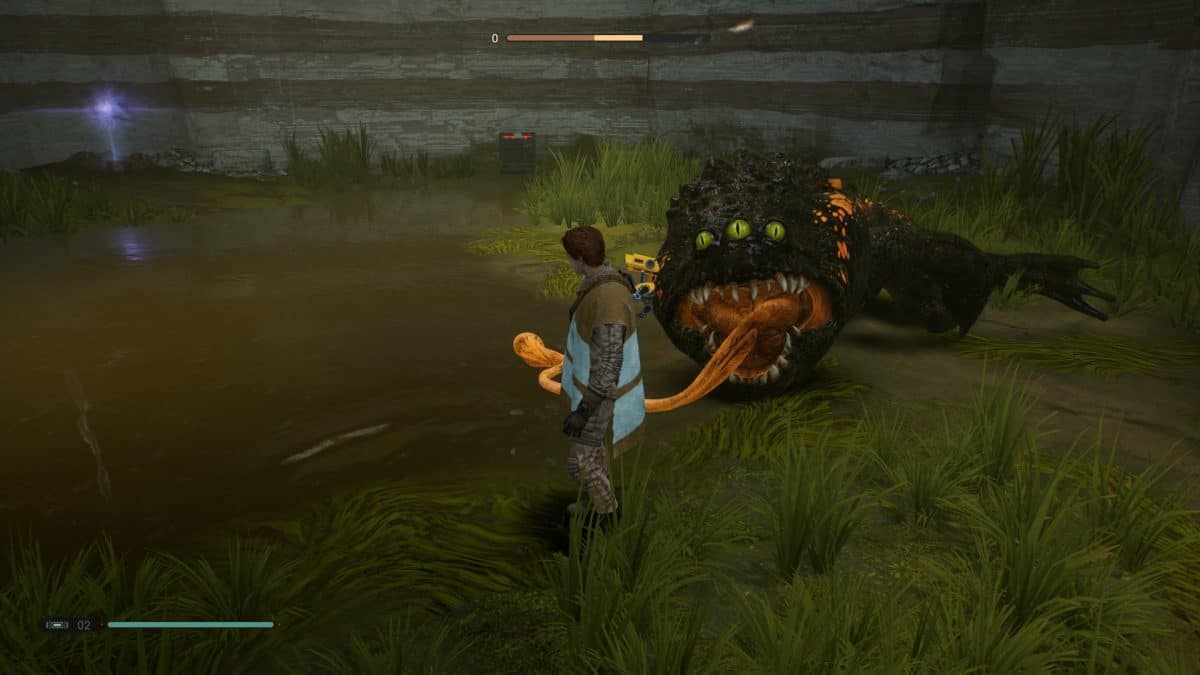 Star Wars Jedi Fallen Order is a brilliant game that features Dark Souls-esque combat, and this extends to boss fights as well. Though not on equal terms with Dark Souls’ bosses, the boss fights can still be nerve wrecking, This guide is to help you deal with one such optional boss, Oggdo Bogdo boss found on the first planet, Bogano. Read on for Star Wars Jedi Fallen Order Oggdo Bogdo Boss fight tips and strategy.

Oggdo Bogdo’s lair can be found in the starting part of Bogdano. It is located near the place where you can solve an optional puzzle with a sphere and fans. The entrance to the cave is near one of the stone ledges.

Alternatively, you could go where the spaceship is parked and jump down one of the giant holes that leads to the creature’s lair, and that is much more fruitful for you as you will read below.

The Oggdo Bogdo is a giant frog-like creature with similar movements. It uses four types of main attacks, which involve leaping towards you, snapping/biting at you, jumping and slamming its body on the ground and using its Tongue to strike you with an unblockable attack.

Its bite is enough to lower more than half you’re HP on high dificulties, so you have only two hits before you need to revive.

How to defeat Oggdo Bogdo
There is an easy way to lower the hp of the boss by 30-50% at start of the fight that is if instead of making your way towards the boss through the tunnels, you should go where the spaceship is parked and jump down one of the giant holes that leads to the creature’s lair, and perform an air attack on the creature catching it unaware.

After this, the key to defeating the boss is dodging continuously. Dodging to the right has proven to be more effective than dodging to the left.

Attacking quickly after each dodge is key to your attacks.

You could do this by:

Make sure you have the healing stim ability unlocked before you attempt the Oggdo Bogdo boss fight in Jedi Fallen Order or you are in for a tough time.

Since the stim takes a little bit of time to use, only use it when you have put a fair amount of distance between you and the boss so that it doesn’t catch you unaware while you are healing.

Always keep an eye out for when the Oggdo Bogdo boss glows red as it is about to perform an unblockable attack when this happens. Be ready to perform a dodge roll in this case.

Most of the time, the unblockable attack is in the form of a tongue-lash which sticks to Cal and then pulls him in to the boss’ mouth who then chews on him. This deals a lot of damage so make sure you avoid this tongue attack at all costs.

Defeat Oggdo Bogdo to receive experience points. You will also be able to collect treasures in the lair – echo and a chest with loot.