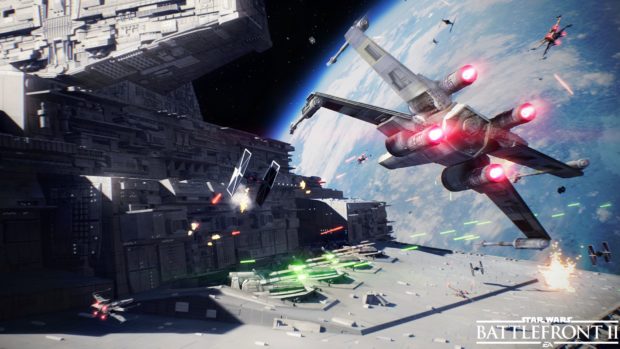 DARTH VADER, who does not want to be Darth Vader. He is quite powerful but has a little bit of a learning curve which can make playing him a little difficult. This Star Wars: Battlefront 2 Vader Guide will show you how to effectively utilize his arsenal. You will be told of everything such as his abilities and which star cards to use when playing as Vader so you are not in the dark about your own hero when you jump into the battlefield.

For more help on Star Wars: Battlefront 2, you can check out our Luke Guide, Yoda Guide, and Darth Maul Guide.

This is how you should utilize Vader’s abilities and which Star Cards you should use when playing as Vader.

The nature of Darth Vader is a tank which means that you will be absorbing a lot of damage as you move through the battlefield so your team can acquire useful objectives and destroy enemies. Your first ability allows you to deal damage by throwing your Lightsaber on your enemies. Similar to many other heroes in the game, you can use this on ranged target to make your life a little bit easier.

Your second ability is the Choke Hold, but it allows you to choke multiple enemies at once for increased efficiency. Choking multiple enemies will not really damage them a lot but will allow your teammates to deal it as they will be hanging and will be quite useless. Your last ability is the Focused Rage and it will allow you to absorb even larger amounts of damage while simultaneously dealing more damage, what else can you possibly need right?

As for Star Cards, you should make your hero much harder to kill by using Bonus Health which allows you to sustain for longer amounts of time. Next, you should enhance your choke ability by using Punishing Grip which will make it harder to break away from your choke holds.

The Last Gasp should be your last card as it will take out multiple enemies much more quickly and efficiently by granting you bonus damage for two or more victims of your attacks.

That is all we have for our Star Wars: Battlefront 2 Vader Guide. Let us know if we missed something using the comments section below!