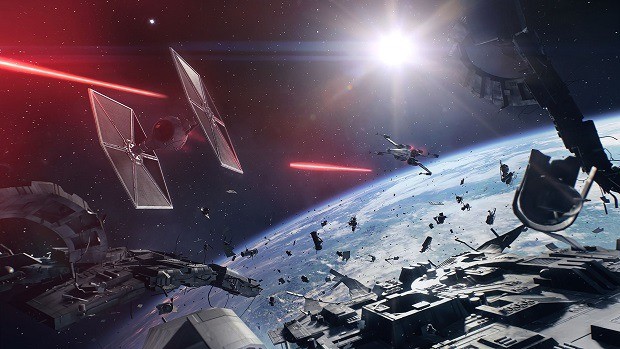 This Star Wars: Battlefront 2 Progression Guide will tell you how the progression system works and how you can swiftly level up without having to waste your time figuring out the intricacies of the system.

For more help on Star Wars: Battlefront 2, you can check out our Collectibles Locations Guide, Unlockable Characters Guide, and Starfighter Assault Guide.

The progression system in Battlefront 2 works in somewhat the same way that is employed by other modern online FPS games.

Your score is added up for the kills, objectives, and other advantages that you get for your team, and at the end of the game, you are rewarded with some XP and credits. Read on to find out how to quickly level up in Star Wars Battlefront 2

Currencies
There are two different types of currencies that you will acquire through the course of the game. You can use them to open loot crates, purchase packs and upgrade star cards.

Linear Progression
Compared to before, there’s no lottery system in place now for the loot crates. You can level up by playing a specific unit and earning skill points by simply enjoying the game. You can use these skill points to unlock Star Cards

Star Cards
Star Cards make you stronger in battle. They are acquired by spending skill points

Your character or vehicle starts with one slot to equip a card but those slots are increased when you increase your rank. Star Cards can by either Common, Uncommon, Rare or Epic.

The better the card, the stronger its effect. You can also use crafting parts to upgrade these cards once you get to a certain rank and class level.

Battle Points
Earn battle points by defeating enemies, protecting your teammates, and completing various objectives. Use these battle points to call in reinforcements and vehicles to even the playing field.

Prestige Level
Your prestige level denotes that you have no Star Cards left to unlock. Prestige Level spans until level 1000, at which point it is maxed out.