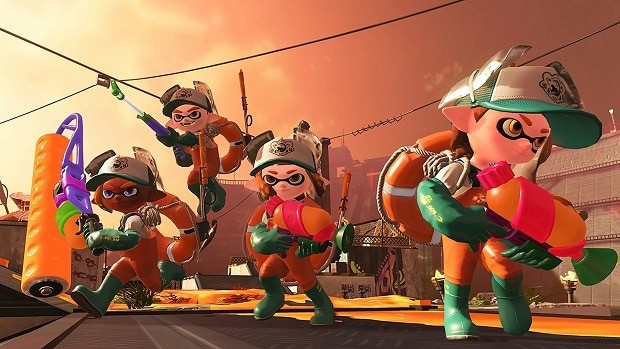 Like other Ink Battle maps in Splatoon 2, a vast majority of the action takes place around the large hilly structure at the very heart of the map.

However, in-game modes like Turf War, you must also pay attention to areas around each team’s spawn point as well as the perimeter.

N-Zap ‘85
Thanks to its incredible rate-of-fire, having N-Zap ’85 in your arsenal while playing on Musselforge Fitness is basically a no-brainer. Moreover, it offers Suction Bombs – something you can almost always rely on during Tower Control.

Slosher
Slosher in Splatoon 2 is arguably one of the best weapons when it comes to flinging ink from the map’s elevated positions; especially in Ink Battles like Tower Control & Splat Zones. On top of it, you’ll gain benefit from Suction Bombs & Tenta Missiles.

Jet Squelcher
If playing at long-range is your thing, you can’t go wrong with Jet Squelcher when playing on the Musselforge Fitness. The weapon contains both increased range & a decent rate-of-fire to keep you relevant, even in this close-to-medium ranged map.

Central Hill
As mentioned earlier, a vast majority of the action takes place at the very heart of the map that contains the Central Hill. When trying to contest this area, try to ink the wall underneath the grates in order to swim to the very top with relative ease. Once you’re at the top, make sure to ink the sides & use the L-shaped walls as cover.

Grated Area
The grated area near each team’s spawn point is an area that you need to contest. However, while trying to contest this area, you need to watch out for defenders who should’ve absolutely no problems when trying to splat you. If you manage to ink the area near the opposing team, you should easily earn some valuable points in Turf War matches. Lastly, be careful when trying to swim across the grates because you can fall off straight to your team’s spawn.

Bricked Platforms
You should find some bricked platforms near the grated areas that provide an excellent overview of the map’s Central Hill. You should always consider this position in order to fend opposing players off the Central Hill using mid-to-long ranged weapons.

Splat Zones
The splat zone is found on top of the wall in the center. You can find some part of the splat zone in the slope sliding downwards.

Tower Control
The Tower is once again found in the center of the stage on top of the climbable hill. The tower first moves down the ramps, and then to the spawn point; after which it heads down the thin alleyway and turns left to the goal.

Rainmaker
The Rainmaker is found in the center of the stage, right on top of the rock-climbing hill. The goal can be found in front of the enemy’s upper levels. You can get too the goal through two ways. To your right, you can use the ramp, or you can use the inkrail to the enemy base.

Clam Blitz
The baskets can be found on the upper level of the enemy base. You can throw in a basket from the level below it