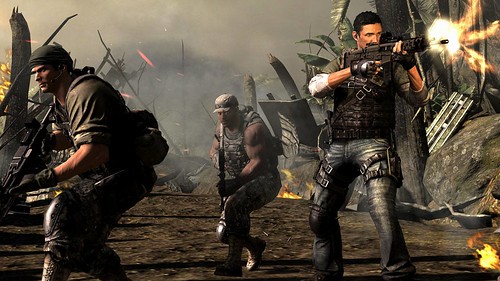 Below is everything you would need to know about each of these four game modes. Each game mode in SOCOM 4 has slightly different rules set under classic and standard game mode settings.

You can go through the descriptions below and find out the differences between standard and classic rules set under different game modes.

Suppression is your regular team death match. Find and kill as many enemies you can to win.

An objective based game that requires you to capture all the neutral sectors placed in the middle of the map to find the opposing team’s Head Quarters. It takes 12 seconds to fully capture a sector, and if you die in your attempt, the capture bar will remain at the same point, you will only have to fill from the point where you died. In order to re-capture a captured sector, you will have to fill the capture bar twice. First you will to remove their capture bar and then fill your own.

Once you have captured all the 3 sectors in the map, you will be able to locate the enemy HQ. After locating the enemy HQ, you need to plant a beacon on one of the two locations in the enemy base. The beacon planting team will have 2 minutes to plant the beacon. After the beacon is planted, it will take 19 seconds to call in an airstrike to win the game.

If the defending team defends the HQ for 2 minutes time period when your team is required to plant the beacon, all three captured bases will return back to neutral along with the original game timer. Both teams must capture all three sectors again.

Uplink is similar to old school capture the flag mode. One team attacks while other defends in this game mode. Attacking team is given the task to steal the defending team’s data by downloading it off random data locations set throughout the map. These data locations are shown on both team’s HUD.

Bomb Squad is similar to search and destroy mode but, with more than one bomb sites. One team must protect the bomb sites while other team must disarm them. The team that disarms the random bomb sites need to choose one player as their Bomb Technician. Who will become the bomb technician is random, but the guy is heavily protected and armed with two unique weapons.

He can still die though. Two unique weapons that Bomb Technician is rewarded are an automatic shotgun and grenade launcher plus he is given 4 smoke grenades. If he dies, no one can pick up his weapons.

Letter over the bomb site will begin to flash, warning both teams when the bombs are being defused. It roughly takes 7 seconds to defuse.

If you find anything interesting to add, don’t hold yourself, comment away.