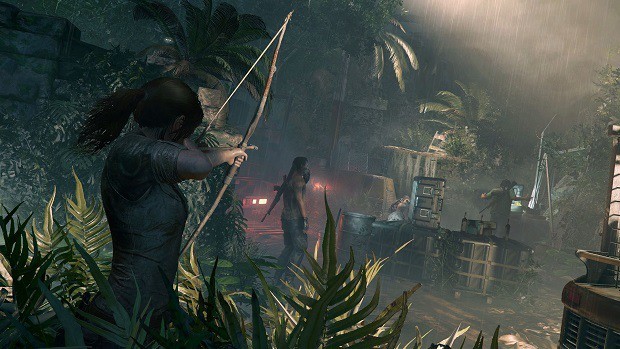 Since they still can be quite tricky to find in the first place, we have a SoTR Crypts Guide that details all the locations for crypts in the game.

Shadow of the Tomb Raider Crypts

Exploration in Shadow of the Tomb Raider is always rewarding, even if you go with the lesser version of the Tombs i.e. the Crypts, you’re still be obtaining treasure which consists of powerful gear, weapons, and outfits.

Just like in the Tombs, you should expect some decent amount of enemies. However, even if you can handle all that, finding them can become frustrating so let us help with that.

Moreover, we will also share all our findings within the SoTR Crypts with you!

Location: Peruvian Jungle
The crypt here is located near the southeast entrance of the Plane Wreckage Base Camp.

The area is filled with darkness and traps so you surely would need to increase the brightness here.

At the start, you will see a blocked passage that you can break down. Follow the path that will take you to the mechanism that can open the crossings.

Go the left side of the cave and disarm the trap and enter the room after the cave. Jump up on the top of the walls and you will see the Sarcophagus here.

You can see the painted Mural of Urqu, the Scout right before you actually reach the ancient coffin. The reward inside the coffin will be part of an outfit, the Eveningstar’s Boots

Location: Peruvian Jungle
This crypt is situated south of Plane Fuselage Base Camp with the access is via the water body. Jack’s Journal #5 can be obtained by jumping onto the platform that lies opposite to the waterfall.

Climb up all the way and break down the wall to gain entry into the crypt. Right after you enter, you will be able to notice the Grave Maker Relic lying on the floor. Past that, you will soon come across the Rimak, the Storyteller Mural.

Taking the route after the spike trap leads to two Elongated Skull Relics but for the Sarcophagus, you will need to head back and enter a tunnel from where you first saw the Mural.

Before getting your treasure, collect A King’s Ransom Document from the platform directly above the coffin itself, climb onto it. Your reward from the coffin will be the Eveningstar’s Cape.

Location: Kuwaq Yaku
Located northeast of the Kuwaq Yaku Basecamp, you will need to go past the bridge and into the river and gain entry to the crypt through a tunnel and some platform climbing.

You will need to burn your way through the entrance; thankfully, you can craft a Molotov with the resources around you.

Moving forward, you will need to slide a dangerous path avoiding spikes until you reach the coffin. Your reward will be another piece of the outfit, the Nine Strides’ Boots.

Location: Hidden City
Head north of the Abandoned Village. You will need to climb up a cliff and then jump down in the water. Go underwater see a passage there, follow the passage until you reach an obstruction which you can clear away using your axe.

Finally at the end of the passage you will see a hole which will take you to the surface.

Observe the Mural on the wall and then descend via the spiral staircase. Your reward is the outfit part i.e. Manko’s Boosts.

Location: Hidden City
While playing the side mission Hearts and Minds, you will eventually be able to find the Sarcophagus which will get you the rewards inside as follows:

Your route would be to head to the Wild Jungle Base Camp in Paititi Wilderness and use the swinging ropes to complete some minor platforming and reach the crypt.

Find the cave entrance which will take you to the room with a large reservoir. At the bottom of the room, break the blocked passage, enter the next room, reach the top.

After observing the Mural, take the way down, and then use the grappling tool to climb onto a ledge and gain entry to the room with the Sarcophagus. You will earn Greaves of Six Sky as the reward.

Location: Hidden City
During one of the objectives in Chapter #6 to free Unuratu, when you are near the Kukulkan Prison, ignore the story marker that says right and instead leap onto a ledge to the left.

Proceed forward and crawl along to gain entry into the tunnel. After observing the Mural up ahead, make your way to the coffin to loot Ch’amaka’s War Vest.

Location: Hidden City
After you have rescued Unuratu and made your way across the suspension bridge, you will find the crypt nearby via your Grapple Axe. The region lies just outside Kukulkan Temple.

From the bridge, jump onto the ledge to the right and climb up to the entrance of the crypt. With a puzzle involving a counterweight, you will make your way to the coffin.

You can collect Yaway’s Wooden Greaves as the reward from the Sarcophagus.

Location: Mission of San Juan
During the side objective Against all Odds, you will be given the task of finding Isabela. Take this opportunity, to go south of where you will find Sara and speak to Guillermo, in the middle part of the jungle.

Descend the two climbing walls. The first one you can get off of by using your axe. For the second one, just jump in the water.

Get inside the water and the crypt will appear. Open up the Sarcophagus to receive Kantu’s Gilded Corset as the reward.

This is all we have in our Shadow of the Tomb Raider Crypts Locations Guide. If there is anything else that you would like to add, let us know in the comments section below!