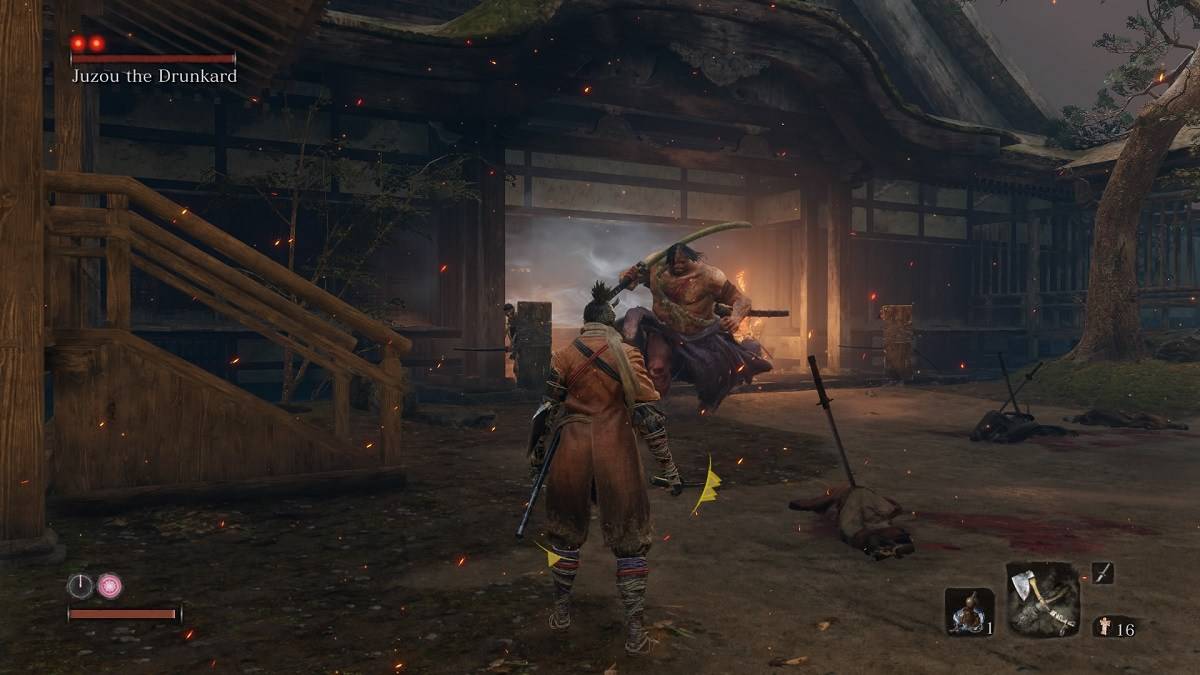 The first order of business is to deal with the mobs around the boss. To do so, you need to find and recruit the samurai in the blue outfit.

You should be able to locate the Blue Samurai in the pond right in front of the boss. Simply inspect the pond to find him.

Doing so should make him follow you into the battle. Once Juzou the Drunkard fight ensues, start killing the enemies surrounding the boss instead of dealing with the boss himself.

The samurai in blue will serve as a distraction, leaving you with plenty of space to deal with the surrounding enemies.

However, keep in mind that the samurai in blue is not as resilient as Wolf and will die pretty quickly. Therefore, make sure to deal with mobs as quickly as possible.

If you manage to take the horde out quickly, he can assist you in fighting the boss and while his damage is not very impressive, he can still help you plenty by keeping the boss occupied while you slash away at him.

How to Beat Juzou the Drunkard?

Juzou the Drunkard hits pretty hard and can take you out very quickly. On the bright side, he is pretty slow so you can dodge around him without putting in too much of an effort.

While most of his slash attacks do not track very well and can be sidestepped to the left somewhat easily, there are some moves that can track your dodge, like his unblockable.

Dodging is risky because just a few hits are enough to kill you. Jumping, on the other hand, is quite useful.

I found that when jumping away from his attack, I was able to dodge all of his attacks except for the attack where he shoves you with his hand but that attack is not used by him quite often and does little damage.

Jump away and wait for opportunities to attack. I have been fighting this boss for a while and I had gathered quite some knowledge on the guy. While the latter technique is good, a better technique is the deflect.

By pressing L1, you can deflect all of his sword attacks, filling up his Posture Meter substantially. To do this, go up in his face and wait for his attacks and on the right time, press L1. Doing this a while, you will get the timings right.

The advantage of this is that on a successful attempt, you will be filling his Posture Meter. On a failed attempt, instead of taking damage, you will block the incoming attack.

However, you can only deflect sword attacks so watch out for his other attack. Juzou in Sekiro Shadows Die Twice is very slow and most of his moves can be seen from a mile.

One of the unblockables he does is a sword swing, as such can be deflected, but I would not advise that because if you miss, he will take a good chunk away.

Look out for this unblockable because it comes out extremely slow so you can anticipate it very easily.

When it comes out, simply jump away from him because dodging will not work. Additionally, you can get free hits when he is drinking and spitting so capitalize on that too.

We hope our Sekiro Juzou the Drunkard Boss Fight Guide helped you. If there is anything else that you would like to add, be sure to let us know!