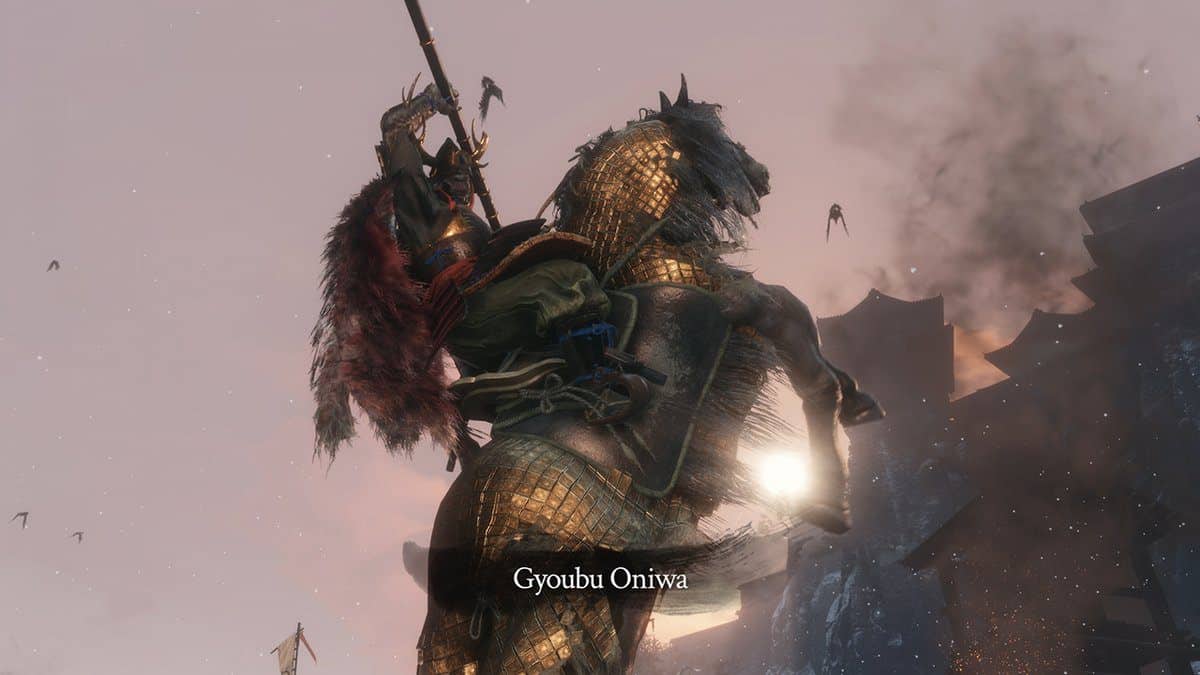 Being a work of Hidetaka Miyazaki, the man behind the Dark Souls series, you can surely imagine a lot of death and tough boss-enemies being at the center of Sekiro: Shadows Die Twice. Bosses are unique in their attack patterns and so every strategy of success differs. In this Sekiro Boss Guide, we will be discussing tips on helping you beat the first boss in the game, Gyoubu Oniwa.

As a general rule of thumb, you can never expect nor hope to complete a boss fight in your first go. That is unless you are going for a world record or speedrun.

The first battle is always where you learn the enemy’s attack patterns; know which attacks can be blocked, which can be dodged, and what are the exact opportune moments where you can dish out damage.

With Sekiro’s Gyoubu Oniwa, you will receive your first taste of a boss fight so it is fitting that you go with the approach above.

By now, you will have encountered and defeated both the other two mini-bosses in the area i.e. Chained Ogre and General Tenzen Yamauchi.

As for Gyoubu Oniwa in Shadows Die Twice, you will find it towards the end of the Ashina Outskirts area after you defeat General Tenzen mini-boss.

You will need to drop down a cliff and into an area where the giant Serpent Guards the canyon. Sneak through the area and make it to the large battleground just past the Ashina Castle Gate Fortress Sculptor’s Idle.

Here, Gyoubu Oniwa charges in on a horse and this marks the start of the battle.

This is a fully offense-oriented and aggressive foe who has two HP bars and carries a spear. His weapon of choice naturally gives him far-reaching and long-range attacks that cover a lot of ground.

His weakness is, well, that he attacks too often and so this leaves his defense quite weak when you block or deflect his attacks. That is the name of the game here – patience and solid defense on your end.

You should deflect his attacks until you fill his Posture Meter and thus break his guard. Now, you will be able to land a lethal blow that will take out a chunk of his life.

Other opportunities of attack can arise when a green symbol appears above Gyoubu indicating that you can grapple onto him with L2/LT and then strike a few times.

You can also dodge his charged rush attack to land some decent-damage hits.

When the first phase of the fight is over, he will perform an unblockable sweep attack that will be indicated by a red “Kanji” symbol.

Quickly perform a jump by inputting X/A when you observe the symbol to avoid damage. Again, grapple onto the enemy at the right time and deflect his sword strikes to get an upper hand and deliver hits of your own.

Once you have whittled his health down enough, you will need to press R1/RB for one last finishing blow and see the words “SHINOBI EXECUTION” appear as you take a sigh of relief at your victory.

The loot items dropped from the boss enemy allows you to upgrade your stats in a particular attribute and enhance your Prosthetic Arm as well.

This is all we have in our Gyoubu Oniwa Boss Fight Guide. If there is anything else that you would like to add, be sure to let us know!