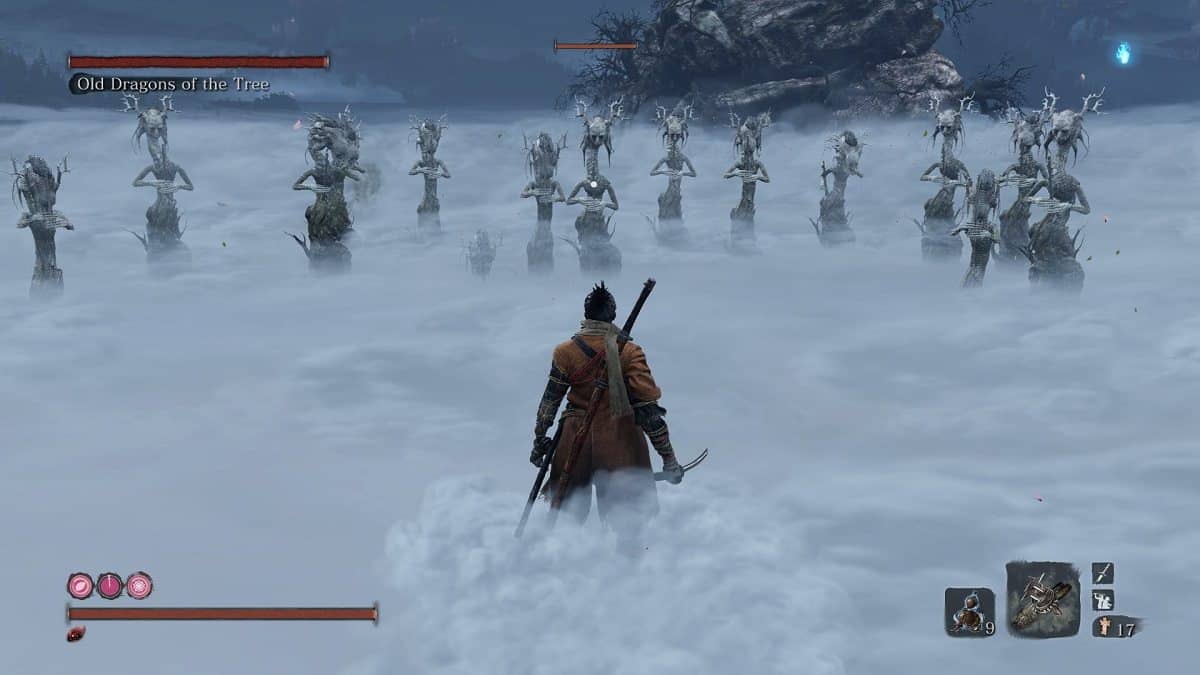 Divine Dragon in Sekiro Shadows Die Twice is more of a puzzle rather than a fight. Before you fight the Divine Dragon, you’ve to deal with the Old Dragons.

The Old Dragons are just there to waste your time and you shouldn’t have any difficulty in dealing with them. As soon as you pray, you will be transported to a new realm. In the new realm, the Old Dragons will start spawning one after another.

The Old Dragons don’t hit hard and aren’t particularly fast. One thing I can give them credit for is their spit attack. They will occasionally spit green stuff on you that will build up some poison.

While the spit from one dragon wouldn’t affect you that much, attacks from several dragons at the same time will poison you instantly. However, this also isn’t much of a problem since at this point, you would probably be rolling in Antidotes.

To take out these dragons quickly, you can use your Mortal Art. However, an even swifter way is to kill some of them and wait for the trees to summon from the ground.

You can easily dodge the trees as they come. When they come, they will stay for a while. At this point, grapple onto one of the trees and sit on top of it. From there, lock-on to any of the dragon then jump and perform an Aerial Deathblow.

There is a unique Deathblow animation for the dragons where after killing the dragon, Wolf swings their body around damaging everyone around him.

Therefore, in addition to killing that one dragon, you’d be critically damaging the rest of the Old Dragons. With a couple of Aerial Deathblows, you should be able to clear the area.

Another thing to keep in mind is that while you will probably kill all the Old Dragons fast, but if you prolong the battle, there’ll be Black Dragons.

After the while, the Divine Dragon will appear and send you flying back with his shout. In the arena, you’ll notice there were a couple of trees ahead of you. Basically, you’ve to use those trees to kill the boss.

The first move is where he swings at you vertically. This move can be avoided by running perpendicularly but a superior method is to block it. While you can also deflect it, there is no point in doing so because the blocking works fine.

Therefore, the main objective is the first to identify which tree ahead has lightning on it. You can easily spot which ones have lightning because there’ll be lightning on them. Additionally, a thin beam of lightning would also be projecting from them.

Once you have identified them, advance towards any one of the trees with lightning. While on your way, block and jump over boss’s two moves.

When you are close enough, just grapple on to it. When you grapple on it, you’ll be launched in the air. At that point, press R1/RB and Wolf will hit the boss with a Lightning Attack. When you are on the ground, rinse and repeat until you have filled boss’s Posture meter.

While approaching the trees, before you grapple, make sure that the boss isn’t in the middle of his attack because if you get hit while grappling, you will be instantly killed.

When you have completely depleted the Posture meter of the boss, the trees will disappear and the boss will go berserk. At this point, wait for the tree to spring back up while you avoid all of the boss’s attacks.

The Divine Dragon will launch a barrage of hits and blocking won’t do you any good.

The best way is to deflect all the hit. Alternately, you can also run towards left that will make you avoid most of his moves. Other than that, you won’t be needing the Health Gourd for most of the fight so might as well make use of them here.

Of course, you still have to jump over the Unblockable Sweep. Once he is done with the frenzy, the trees will appear once more.

Again, find the one with lightning on it and perform the same maneuver. This time you will get a different animation and the boss will be knocked. Climb onto his sword and perform a final Deathblow to put him out of his misery.