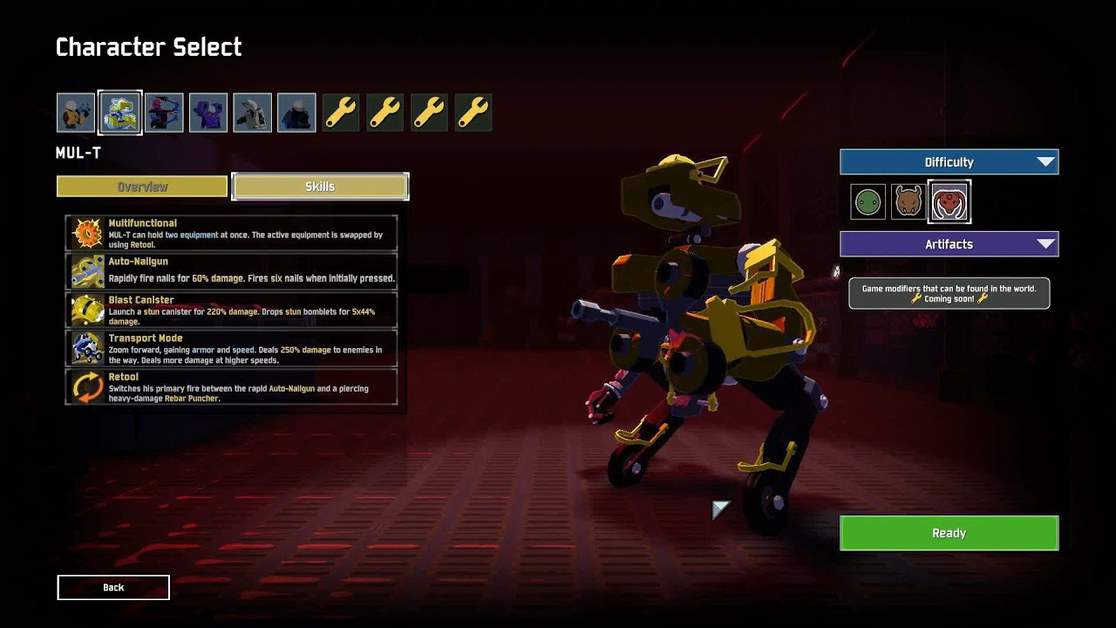 In order to let you reach the maximum potential of Mul-T, we have formulated this Risk of Rain 2 Mul-T guide to ease off the load off your shoulders by elaborating on all the abilities and moves of Mul-T.

Our RoR 2 Mul-T Robot Character Guide of ours covers all the steps about Mul-T, starting from the method of unlocking it and reaching up to all the passive, primary, and secondary abilities.

Mul-T is the only Robot Character in RoR 2 using which you can be confident enough that you will be able to beat the Monsoon difficulty.

First things first – Mul-T is fastest in terms of attacking speed since he is equipped with an auto-nail gun.

Besides, the Mul-T comes with the highest HP in the game. That being said, he scales better than any other survivor in the game.

How to Unlock Mul-T
Unlocking Mul-T is perhaps pretty easy and straight since you will eventually unlock it just by playing the game naturally.

However, if you want to speed up the process, the easiest way is to complete the first stage 5 times and you will have farmed enough to unlock Mul-T.

The passive ability of Mul-T lets him hold two pieces of equipment at once. Moreover, you don’t have to worry about the cooldown of your equipment too since both of the equipment will have their independent cool down periods.

Primary
Now before you start using Primary Abilities, you must keep in mind the positive side of Passive ability – you can use two equipment at the same time!

This means that you can use Auto-Nailgun and Rebar at the same time too which are described as follow along with the other two primary abilities:

Auto-Nailgun
A primary type ability with 0.4 Proc Coefficient. This ability will let you rapidly fire nails dealing 60% damage, firing up to 6 nails if initially pressed.

Scrap Launcher
A primary type ability with 1 Proc Coefficient and 1.5 seconds cool down timing. It lets you fire an arcing hunt that explodes for 360% damage.

Power Saw
Power Saw is also a primary type ability with 1 Proc Coefficient and is perhaps one of the highest damage dealing abilities but for close range only.

It lets you saw nearby enemies for 1000% damage each second.

Secondary Ability: Blast Canister
Blast Canister is the secondary ability of Mul-T having a long cool down period of 6 seconds and 1 Proc Coefficient.

The canister then further explodes into many little stun canisters doing 44% damage each.

This is perhaps why the stun canister has a long cool down period and hence you should always be aware before trying to burst these canisters one after another.

Retool
This ability Switches his primary fire between the rapid Auto-Nailgun and a piercing heavy-damage Rebar Puncher.

Below we have listed some different item builds for MUL-T.

Wax Quail
Jumping while sprinting boosts you forward by 10m (+10m per stack).

Len’s Maker Glasses
Your attacks have a 10% (+10% per stack) chance to ‘Critically Strike’, dealing double damage.

Leeching Seed
Dealing damage heals you for 1 (+1 per stack) health.

Armor-Piercing Rounds
Deal an additional 20% damage (+10% per stack) to bosses.