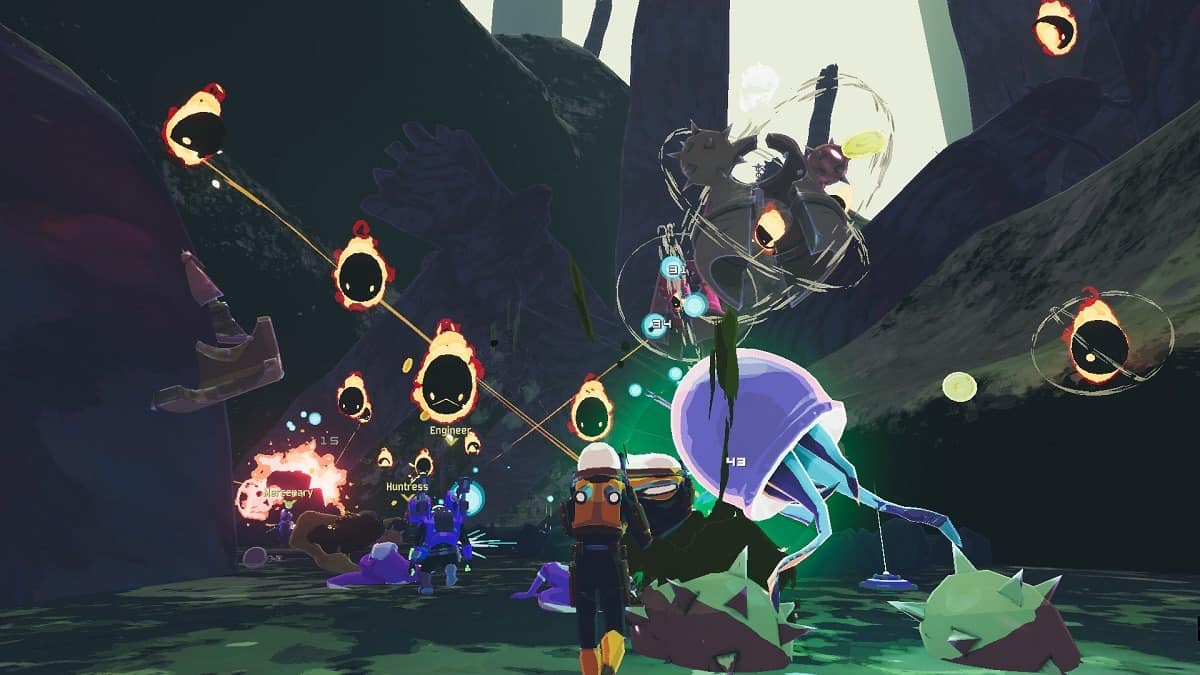 The Engineer in Risk of Rain 2 is a Technomancer from the roster. While most of the other characters rely on ranged weapons, the Engineer has explosives and a turret in his kit. This makes Engineer not relevant at long-ranged combat but he makes up for it in the damage department.

The explosion caused by the mines can cause massive destruction, leaving the opposition in shambles. Here’s everything you need to know about Risk of Rain 2 Engineer class.

The Engineer is a pretty powerful short range character who uses a Grenade Launcher as his primary and throws mines as his secondary.

The primaries of other characters require you to simply aim and shoot but Engineer requires an insane amount of practice and precision and strategy.

Secondary Ability – Sticky Mines
The secondary ability of Engineer is his mines. You can hold up to 10 mines without any inventory upgrade. These mines set off upon enemy contact.

You can set them up in places where enemy presence is expected.

This is a viable move but you should try tossing them directly at enemies. Since there’s no friendly-fire, your mines won’t hurt your allies no matter the range.

Another cool mechanism of the mines is that they stick to all surfaces including other characters. You can stick a couple on your friend and ask him to charge onto the enemies.

Utility Skill – Bubble Shield
Engineer has a utility ability of Shield Generation that lets him generate a huge dome-shaped shield for protection.

This impenetrable shield can deflect almost all of the enemy projectiles or in short – blocks all incoming damage.

The cool down of this bubble shield 25 seconds which is pretty long. Hence you should try to use it every time you get a chance since you won’t be able to use much of it in short combats.

The only shortcoming to the bubble shield is that anything can walk past your shield that means while you are safe from long-ranged projectiles; you’ll still take damage inside your shield.

To deal with this, you can pre-place a couple of mines inside the shield to blow up anything that tries to enter it.

Unique Skill – Turrets
Engineer’s ultimate ability is of deploying turrets to fend off enemies. This is perhaps a major incentive to pick this character because the turrets act like additional players. When deployed, turrets shoot at anything other than you and your partner that moves.

Additionally, turrets can take the heat off you by distracting enemies while you get some room for breathing and will also take damage for you.

You can also place the turret inside your shield where it lasts longer. Also, note that turrets can be destroyed.

As such, it’s important to keep an eye on their HP gauge. Additionally, you can use the Bustling Fungus close to them to get their HP back up along with yours.

This isn’t the only healing they can get. They can also be healed with the soldier’s syringe so be sure to share the syringe with your turrets when you can.

Bustling Fungus & N’Kuhana
Engineer has a pretty unique and powerful build called as N’Kuhana build which no other class can use.

The Bustling Fungus is an item that shines only when Engineer has it. It creates an AOE of healing if you stay still for 2 seconds and both the healing and the AOE grow with the number of stacks of fungus.

The N’Kuhana is also a legendary item that will spawn skulls that deal as much damage as much healing you or your turrets have received.

So in short, both N’Kuhana and Bustling Fungus are quite high functioning health healing and damage dealing abilities respectively and you must use them when you get the chance.

The key focus in this build is placed upon Mobility since it is a very essential practice for avoiding damages and proceeding further.

So if you really desire mobility and want to increase your pace while slightly affecting the damage and range areas.