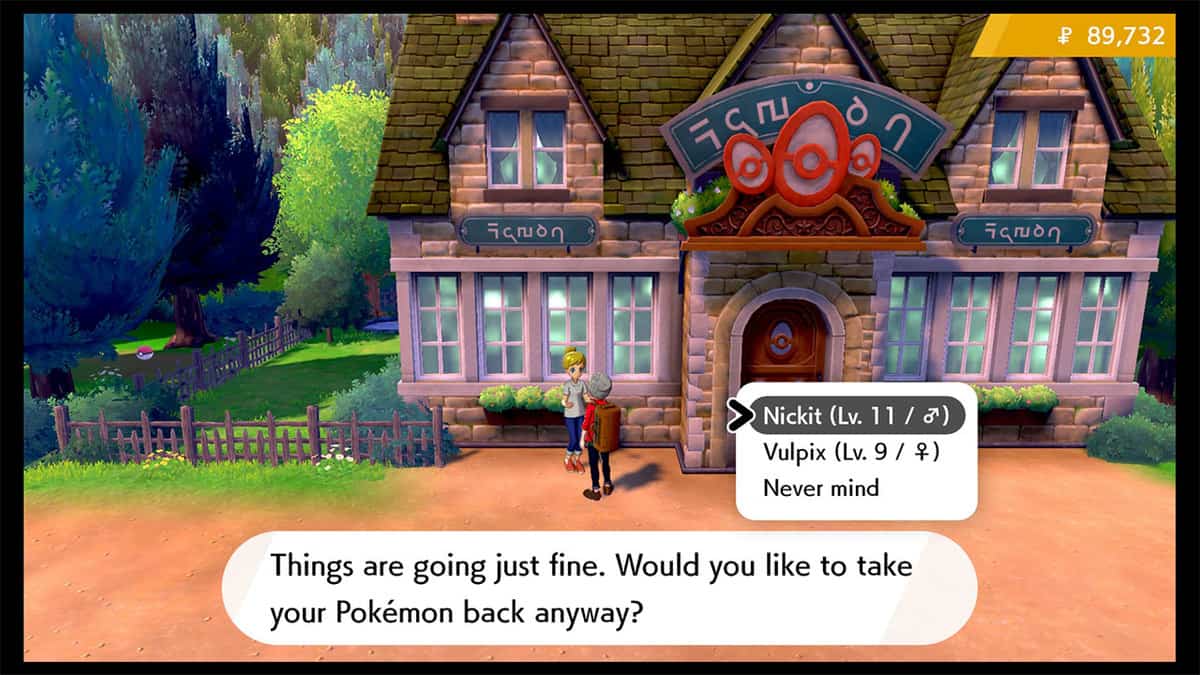 The Day Care returns in the new Pokemon game. This Pokemon Sword and Shield Day Care guide will tell you all about the nursery in the new game including its locations. While the Pokemon nursery might look a bit different this time, it is still featuring the same potential to breed exciting new Pokemon.

The Pokemon Nursery is the Galarian version of the Daycare that’s been present in almost all Pokemon games. Here you can leave behind your Pokemon to breed eggs. Pokemon at Nursery will not get EXP.

There are two Pokemon Day Care nurseries in Galar region. One in Route 5 and the other in Bridge Field of the Wild Area. You’ll gain access to the first Nursery after beating Grass Type Gym Leader Milo.

Leaving Pokemon at the Pokemon Nursery can have multiple outcomes:

How to leave Pokemon in Nursery

If you wish to leave a Pokemon at the nursery, speak to the granddaughter located on the exterior of the building.

It costs 500 to leave one Pokemon at the Pokemon Nursery. You can leave a total of two Pokemon at a time.

As mentioned above you can use the Pokemon Nursery for breeding purposes if you like to chase things like perfect IVs. As there are two nurseries, you can leave a net total of four Pokemon at once, two in each.

As of now, you have access to only two Pokemon Nurseries in the game. One of these is on Route 5 and the other is found in Bridge Field of the Wild Area.

The only exception to this Egg Group Rule is Ditto. Since Ditto can take on the form of almost any pokemon, it can also breed with almost every pokemon, irrespective of the gender as well. The only limitation for Ditto are Legendary pokemons.

While breeding, you also have the option to move some of the Egg Moves to the pokemon provided they are of the same species.

Your Pokemon egg hatches by including Pokemon egg in your team and walk around for a certain distance. By utilizing Nursery, you can manipulate Pokemon’s move, nature, ability, and many other stats to create strong Pokemon.

Pokemon that hatch will be beginning at Level One so it is recommended that you go ahead and lease them out to Pokejobs to level them up otherwise they will just get annihilated.

How to get Pokemon to lay more Eggs

You can make the Pokemon you are breeding; lay potentially more eggs with the use of this tip. Once you have finished the game and defeated Leon in the Pokemon League, you can go to Hotel Ionia found in Circhester where you will find the Game Freak designer Shigeki Morimoto with a formidable Pokemon team. If you defeat him, he will reward you with an Oval Charm, which allows Pokemon to actually lay more eggs.

Sometimes, you might want a specific nature for the baby Pokemon. However, the nature of your desire is restricted to one of the two Pokemon’s nature. To do this, you are going to need the Everstone. Give the Everstone to the parent Pokemon whose nature you would like to be passed down to the baby, this will guarantee that the offspring will have the same nature, as long as they both are of the same species.

Certain items are required to be held by Pokemon in order to produce an egg, the items required for these Pokemon are listed below.