PlayStation VR Release Date May Have Been Revealed 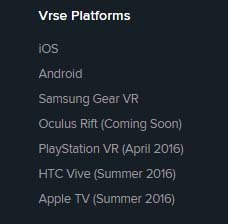 The anticipation around PlayStation VR is growing, but we’ve yet to see a release date for the Virtual Reality headset, but we may have a hint. It appears that the release date may be in April 2016.

Based on the Website for Vrse a computer working on “Virtual Reality Experiences” they have provided a list of platforms that Vrse will work on. This includes PlayStation VR. What is interesting about the list is when it says Sony’s Virtual Reality headset will be available:

As you can see, the list states that PlayStation VR will be coming in April 2016. While we don’t know where they got this date from, it has started speculation as to if this is the actual date we can expect it. If this is true, will Sony be happy that the month of release has been outed?

With plenty of speculation around the release date, as well as the price any hints like this are going to caused much debate. What does seem odd about an April release though is that we’ve not heard about it yet. This is what may prove this speculation wrong.

Whether there is any truth behind this PlayStation VR release date or not, it is still interesting to see release windows like this appear. Though it does seem a little early in the year for Sony’s big release to be available. It seems much more reasonable to expect it after E3 where the release date, and the games can be teased to the audience.

What are your thoughts on this PlayStation VR Release Date? Could this be the one? Let us know in the comments section below.