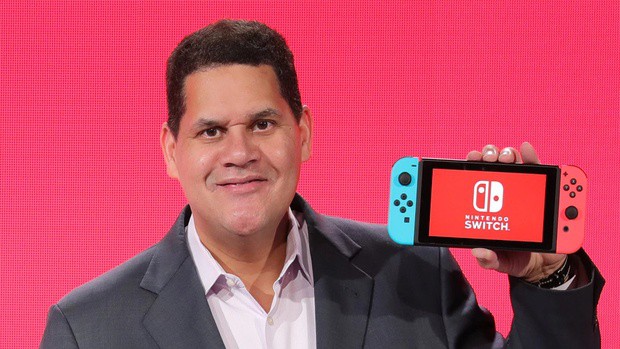 Nintendo Switch has been selling like hot cakes since launch. But does it meet the goals set by Nintendo itself? Yes, it does and it’s going to continue doing it in the future according to Reggie Fils-Aimé.

If you don’t know, Nintendo has a goal set to achieve over 20 Million Nintendo Switch sales before the end of current fiscal year. It seems impossible but Reggie is still very confident about it.

Nintendo of America President, Reggie Fils-Aimé recently gave a very detailed interview to Forbes. During this interview, Reggie Fils-Aimé talked about Nintendo Switch sales, their goal, software sales and more. Reggie revealed that he’s still very confident that Nintendo will be able to sell over 20 Million consoles by the end of their fiscal year which ends on March 31, 2019.

We’re feeling confident in our momentum and it’s not just a stellar launch of Pokémon, it’s not just what appears to be a stellar launch for Super Smash Bros. Ultimate. That Black Friday through Cyber Monday time frame was critically important to us, the remaining shopping days now through Christmas are critically important to us. More days right after Christmas as consumers receive gift cards or take unwanted gifts and monetize into things like Nintendo Switch are important to us. So, this is going to be an ongoing effort to make sure that we drive our business forward through the balance of this holiday season but also the first calendar quarter as well.

Though many of the investors don’t seem to believe that Nintendo will be able to achieve the goal. It’s because the current Nintendo Switch sales stand at 5 million. This means that Nintendo has to sell over 15 Million Nintendo Switch units in less than 6 months. It’s a big task but definitely a possibility for Nintendo.

Furthermore, Regie talked about the attach rate and Software sales Nintendo is currently bringing in.

So first, in terms of traditional attach rate, the Nintendo Switch is performing at historic levels. As we sit here today, Legend of Zelda: Breath of the Wild, Mario Kart 8 Deluxe, Super Mario Odyssey, each one did attaching at better than 50%, meaning each of these games in the United States across the population of hardware consume one out of every two consumers that bought those games.

And we’ve never seen 50% attach rates to begin with and seeing that across three different games coming up on to our second holiday is completely unheard of. Second thing I would say is that beyond the number of games attaching to a system, we’re looking at the overall software revenue that we’re generating, so now this starts to take into account DLC, it takes into account purchases of indie games and other content, and again, the Nintendo Switch here in the United States is generating a level of revenue per piece of hardware that we’ve never seen in our history. And so our consumers are engaged, they’re buying software, they’re playing software, as long as we continue to do this, we’re going to have a very vibrant platform which will continue to attract the very best from the big third-party developers as well as the smaller independent developers.

Back in 2017, Nintendo revealed that they have sold more than 17.8 million Nintendo Switch consoles. Now that was just a few numbers less than their goal of the 2018 fiscal year but Nintendo remained confident to pull it off.

We have to see yet the exact number of sales of games like Pokémon Let’s Go and Super Smash Bros. Ultimate.

Both did manage to break sale records which will help Nintendo reach the goal much quicker. Pokémon Let’s Go debuted with the most number of sales on Nintendo for the first week. Pokémon Let’s Go clearly outperformed the previous biggest tile on Switch which is Legend of Zelda: Breath of the Wild.