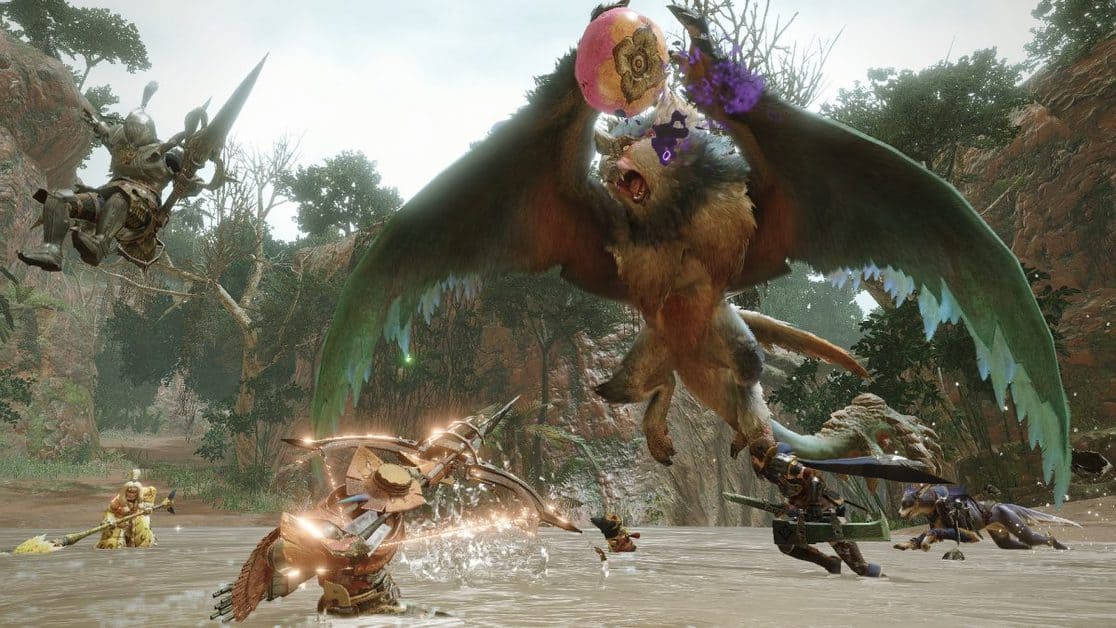 Bishaten is amongst the many exotic monsters featured in Monster Hunter Rise. This gigantic omnivore prefers eating fruits, and it keeps a large amount of these fruits in his pocket. Bishaten loves playing tricks on preys, and our guide show you how to defeat it in the best manner possible when you encounter it in Monster Hunter Rise.

Where Can I Find Bishaten in MH Rise?

Bishaten is an incredibly acrobatic monster with a huge tail. Bishaten can use its tail to stand on and also attack people and other prey. The ailments of this fifth-generation monster include poison and stun.

Bishaten spawns in only two locations in Monster Hunter Rise. You’ll encounter it first in the Shrine Ruins, and then in the Flooded Forest.

You’ll also encounter this beast in several quests throughout your playthrough of the game. When it comes to Low Rank, you’ll come across Bishaten in MH Rise in the following quests:

And as for High Rank, you’ll meet Bishaten in the following three quests:

To help you understand the weaknesses of Bishaten in detail, we’ve listed down the effectiveness of all types of damage to each of its body parts below.

Below, we’ve listed down the effectiveness of different ailments on Bishaten in MHR. The rating is given out of 5 stars, with a higher rating meaning the ailment is more effective.

If you want to take down Bishaten easily in MH Rise, you need to learn its attack patterns before you step into the battlefield. To help you with that, we’ve listed down all of its main attacks below.

March towards the lake where you will find Bishaten. Bishaten will be enraged, and the boss fight will start. Remember that the best way to take down Bishaten is by continuously attacking its tail. Take your antidote for a health boost and dodge Bishaten’s tail attacks.

Stay at proximity but also be wary of Bishaten’s fruit and tail attacks. The tail should be your primary area of focus on Bishaten’s body.

Bishaten’s fruits are supposed to break on impact, but if you manage to interrupt Bishaten while he’s about to throw the fruit, he will instead drop the fruit; allowing you to use them to your benefit.

The three types of fruit he will use are Poison Fruit, which inflicts poison on the target; Jumbo Fruit, which can be used to recover HP and Flash Fruit, which acts as a flashbang.

So whenever he drops his fruit, make sure to grab the Jumbo Fruit to regenerate your health. But while you’re doing so, watch out for the poisonous fruit around you.

Attack the wings and face when you get the chance. Jump and attack Bishaten from above.

Bishaten will run away to the alleyway nearby. You’ll find him hiding nearby some huts; this is your chance to attack him with full force. Select the Attack and Ride Wyvern option and get on Bishaten’s back. It will be hard to control Bishaten, but it will cause him some damage.

He’ll toss you off his back, be continuous with your attacks and keep hitting him on the head to keep him down on the ground. This will drain him out of his health. Bishaten will do a tailspin; the best way to tackle this spin would be to attack his tail.

Make sure to dodge his tail attacks as they will strike you. Make sure to take your antidote to restore health.

Eventually, Bishaten will run off to a distant spot and launch his fruit attacks from there.  At this point, you should be aware of five types of attacks by Bishaten.

Below is a list of all the items that can be obtained from Bishaten, with their respective drop rates for each method of acquisition.

Using the item drops mentioned above, you have the option to craft unique weapons in MH Rise themed after Bishaten.

Similar to the weapons, you can also craft Bishaten themed armor in MHR. These Bishaten armor pieces not only give you appearance that resembles Bishaten but also provide useful stat bonuses.

Below is a list of all the armor sets that you can craft using the items obtained by defeating Bishaten in MH Rise.