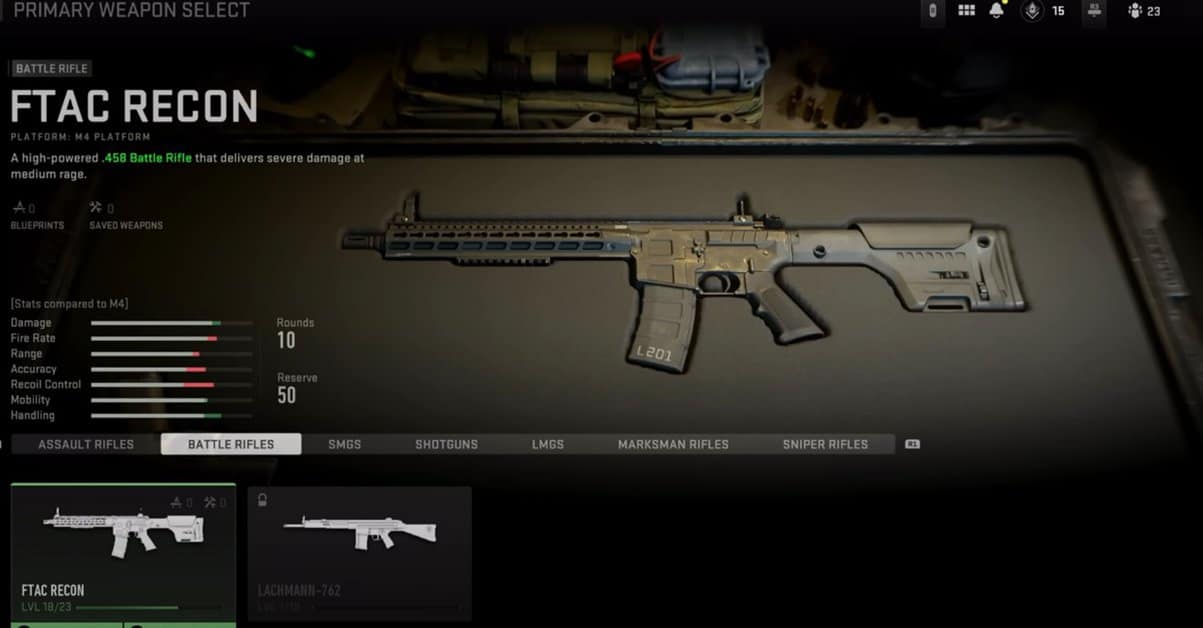 Call of Duty games become boring really fast if the weapon customization or gunsmith feature isn’t robust and feels lackluster. Thankfully, that doesn’t seem to be the case with how weapon progression has been altered in Modern Warfare 2.

In Modern Warfare 2, a completely new progression system, Weapon Platform, is introduced to the Gunsmith, changing the way weapon progression works in the game.

According to Infinity Ward, in the Weapon platform, you can collect five or fewer weapons from the same manufacturer.

All these weapons can share attachments if compatible, and you can get a more customized gun. If you have a weapon that is a part of the bigger Weapons Platform, you can level it up to change the Receiver attachment.

But for that, you will need Gunsmith as changing the weapon Receiver will change its class and become an entirely new weapon.

You can take the example of M4, which is available early on and has four receivers. To unlock each of its receivers, you must level up the weapon.

The first receiver of M4 will unlocks after upgrading the weapon to level 14. As you continue to progress further in the M4 progression tree, you will unlock more receivers thus newer weapons that can transform your M4 from an AR to an FSS SMG.

Changes in the weapon attachments

The weapons attachments have also changed significantly thanks to Gunsmith 2.0 in CoD MW2. You will find two categories of weapon attachments; now, one is Weapons Platform Specific Attachments and Universal Attachments.

Below you will find attachments in both categories of weapon attachments.

The following are the shareable attachments between the receivers of the Weapons Platform. Taking the same example of M4 as before, all of these attachments will be available to every weapon on the M4 platform once you have unlocked these attachments.

For example, if you unlock a Rear Grip you like on the M4 platform, once you change its receiver to FTAC Battle Rifle, the grip will be available to use from the start and you won’t have to unlock it again.

Below are all the weapon platform attachments that are shared across all guns within the platform in MW2.

If compatible, the following are the universal attachments for all the Weapons in Modern Warfare 2.

The new Weapon platform is an excellent addition to Call of Duty: Modern Warfare 2. Only unlocking the attachment once will serve the purpose, and you can use it with all compatible weapons.

Weapon platforms and the new progression system also serve a new purpose to further customize each weapon to your own preference. Fully leveling up a weapon platform and completing its progression tree will unlock the advanced tuning feature in CoD MW2 (2022).

Do keep in mind that advanced tuning only applies to gunsmithable weapons but there are plenty of those so you don’t have to worry.

Thanks to advanced tuning in Call of Duty Modern Warfare II, players will be able to even further customize the performance and behavior of each weapon attachment with the help of sliders and charts.

If you feel your desired group should focus more towards recoil control instead of ADS speed, now you can do that.

Advanced tuning is obviously meant for more experienced players who want granular control over their weapons and are always looking for more customization options but it is nonetheless a great addition to gunsmith 2.0 in Modern Warfare 2.

There are a total of 51 weapons in MW2 that belong from different platforms and as soon as the player’s military rank is leveled up, 28 of them can be unlocked.

Weapons unlocked by leveling up Weapons

Who said leveling the weapons does not come with a reward? Many weapons will be unlocked as soon as the weapon level has reached a specific level. The details could be found in the table below: