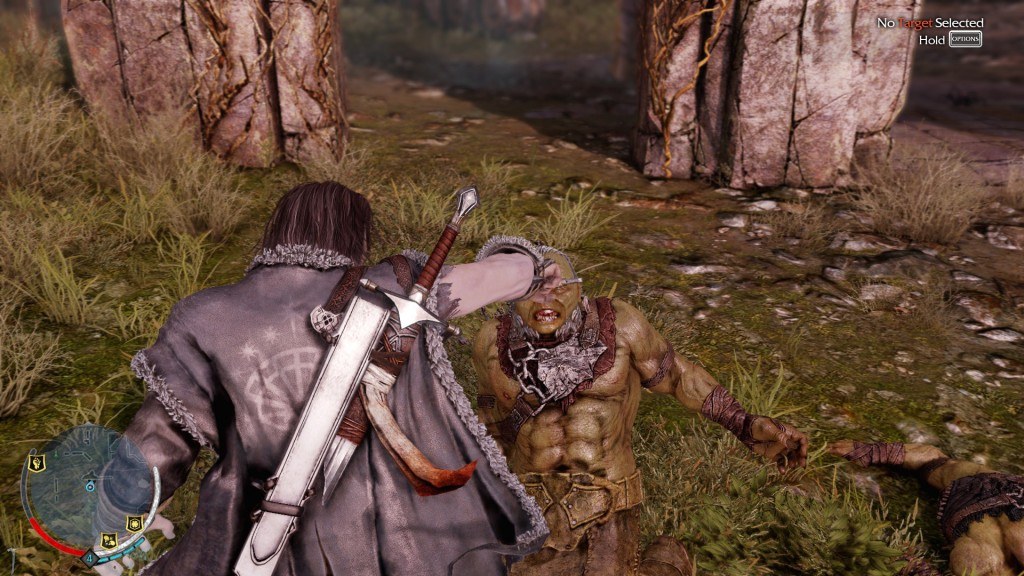 The similarities between Middle-earth: Shadow of Mordor and Assassin’s Creed are striking, but when it comes to combat mechanics, another great inspiration surfaces and it is none other than Rocksteady’s Batman: Arkham Asylum.

The game’s central protagonist is a resurrected ranger, Talion, who is able to transform into human and a wraith at will. The ability to transform at will provide Talion a wide array of attacks and combat strategies.

In this guide, I’m going to talk about different strategies related to combat of the game.

Beginners! Think about Arkham Asylum
Like I have mentioned above, when it comes to combat, ‘Middle-earth: Shadow of Mordor’ has striking similarities to Arkham Asylum.

For starters, I would recommend mashing attack buttons to take down average foes. However, the number of foes will increase as you progress through the game and things will get a little tougher.

At this stage, when an enemy is about to attack Talion, a small Triangle/Y (while playing on consoles) will appear on top of that enemy.

Similar to Arkham Asylum, you need to press the Triangle/Y at the precise moment to counter that enemy’s attack. You need to keep on doing this and build up the long combo chains.

Don’t get Too Close if Not Required
One of the most precious things in Talion’s arsenal is bow and arrow. Press and hold L2/LT to pull out your bow and hold R2/RT to aim an enemy at long range. After having your target in your sight, release the R2/RT to hit the targeted enemy.

Note that hitting an enemy anywhere in the body will cause it to slow down, but going for a headshot will inflict more damage. Another thing to note here is that pressing Circle/B while targeting a stunned enemy will instantly kill it.

Be Smart! Run away if you cannot handle it
You may have already read it on a number of other websites, but I cannot move on without reinforcing it. Middle-earth: Shadow of Mordor is a vast game and you must be smart to avoid unwanted deaths. It takes time to upgrade Talion’s weapons and abilities.

Do not go in a battle with hundreds of enemies while mashing attack button and keeping no track of Talion’s health. Health is hard to come by in this game and you must keep this in mind.

If you see that you’re getting overwhelmed by these enemies, move away from the battle to let Talion regain his health before moving in again.

Stealth is a Powerful Asset in Mordor
First off, note that enemies in this game are not identical! Every enemy in this game varies when it comes about anger and interest in Talion.

Similar to Assassin’s Creed franchise, if an enemy spots you, a yellow/red blip will appear over its head, indicating their awareness of your presence. When alerted, these enemies will search and investigate the entire area to find Talion.

Once the target turns red, press Square/X to perform stealth kills. In addition to this, holding RT/R2 and pressing Square/X over a stunned enemy will let Talion finish it off. Lastly, note that if an enemy spots a dead body, it will call in reinforcements to search the area.

Hide in Bushes More Frequently
Just like in Assassin’s Creed, walking in bushes will hide Talion from all enemies. When hiding inside these bushes, Talion can stealth kill enemies and perform ranged kills using bow and arrow. However, do note that if an enemy sees you entering a bush, this method is not going to work.

To know if Talion is properly hid from all enemies, notice whether he is in crouched position or not. In addition to this, Talion’s body will turn semi-transparent when hidden. It is a good idea to make use of these bushes as it allows Talion to reduce the number of enemies one by one.

Knowing the Strengths and Weaknesses of Captains
Each Captain in the game has unique strengths and weaknesses that Talion can know to use to his advantage. There are multiple ways of knowing this information. For example, some of this information is found openly across the world.

In addition to this, there are some special enemies called Worms. These enemies glow green when Talion is in the Wraith World. It is highly recommended that Worms should not be killed, but interrogated to receive valuable Intel on the Captains.

Using Captains’ Strengths and Weaknesses to your Advantage
Like I have mentioned above, it is a good strategy to know strengths and weaknesses of different Captains.

Doing so not only adds another dimension to the game, but also makes killing these creatures much easier. There are some Captains immune to ranged attacks and some who are afraid of Caragor.

It is always better to encounter a Captain in one on one scenario, but if it calls reinforcements, keep your attention on the Captain. The reason for this is that these Captains regenerate health over time which can be really frustrating.

Other than this, some of the Captains will try to flee from the area. You do not want this to happen at all costs. If a Captain tries to flee, chase it down and kill it.

Don’t worry! You will not run out of Captains ever. Once you have killed a Captain, it will drop a Rune which will power up Talion’s weapons.

Lastly, never ever try and kill a Captain in stealth mode. It is a complete waste of time.

Caragor is Fiercer Fighter than Talion
These beasts really shine when it comes to battle and can easily kill anyone, either enemies or Talion. You will often come across these tied in chains. Free them while they are near enemies and watch the hell break loose.

You can also command these creatures to aid you in combat. To do so, you need Ride Caragors Ability. Once you have the ability, jump over a Caragor and complete a mini-game to start riding it.

After riding a Caragor, it will remain on your side and will fight for you until it dies. These creatures have their own attacks in combat that can be used both against Captains and ordinary enemies.

If you are entering an orc-infested area like a stronghold, make sure to look for archers and other enemies with ranged attacks and take them out first! You can thank me later.

Orcs are in Plenty, Use them as Shields
This is most certainly one of the best uses of orcs in the game. You can hold orcs and use them as a shield against other enemies. The enemies will keep on hitting the one you are holding until it dies. This is not all!

The best thing is that the other enemies will keep on attacking the one you are holding as a shield even if he is a higher ranked officer than they are – saves you a lot of time and effort.