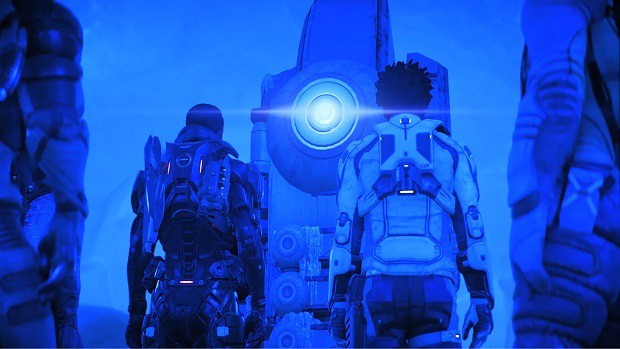 Crafting in Mass Effect Andromeda is divided into Research and Development. The R&D terminal on the Tempest can also be used to upgrade weapons and armor in the game, making the better suited for difficult combat encounters.

Mass Effect Andromeda upgrade guide will help players boost their armor, weapons and other useful equipment that is utilized in the field for better survivability and performance.

Once players get access to the Tempest, they can talk to Liam who will explain the Research and Development Terminal as well as tips on how to use the feature.

The terminal uses Research Points for upgrade and development and players can get these points by scanning the technologies or anomalies related to either of the three technology trees.

Once players have enough Research Data or points, they can use it to learn blueprints of new gear and weapons or learn upgrades of existing gear.

After getting the desired blueprints, players need to switch to the Development section of the terminal in order to craft new gear or upgrade their already available equipment for better survival in Andromeda.

Andromeda crafting/development portion is divided into Weapons, Armors and Augmentations. Since resources aren’t very easy to come by especially in early game, players should be really careful when crafting something new or upgrading their current gear to better tailor their play style.

Spend AVP on upgrades that boost your research gains.
You should use Andromeda Viability Points on things which provide you resources at set times to accumulate a good chunk of research points over time.

While travelling look for anomalies:
No need for sucking up each planet in every system dry for resources. Anomalies provide a good number of research points so it’s better to be on the lookout for those

Scanning
Use the scanner in any new room which you enter and you will probably find something. Performing this is the most efficient way to receiving research points

Milky Way weapons
These are good weapons which are able to do good damage. Defeinately safe investments

Heleus weapons
This branch has the most high-skill weapons of the bunch. The Dhan is a powerful shotgun which shoots a single pellet in the form of an arc. It is difficult to handle, but once you have mastered it, you will be able to defeat the toughest enemies in less hits compared to some other weapons. Isharay sniper rifle deals 1000 damage per hit but because of its low mag size and slow fire rate you should try to get the select few shots you can.

Remnant weapons
These are energy weapons which don’t consume ammo but can overheat because of continuous fire done without a break. These weapons don’t deal much damage but their fire rate and cooling rate are faster than most weapons.

Augmentations
This branch does not matter as much as the others. They’re kind of cheap overall but it makes for some nice upgrades for your guns.

Weapon augmentations
Research these to bolster your playstyle with the right augmentations for your weapons. Focus on DPS before crowd management and team play if you’re going aggressive or go for high accuracy distance-based augmentations for sniping .As for armor, the small buffs are nice but they’re really not game changers; you might as well go for aesthetics here.

Decompose old items.
Inventory space runs out quickly, so you should drop old items to keep your inventory space free for new items and get a nice chunk of resources for doing so

Strike Teams
Strike Teams are the easiest way to earn money, resources, and research. Deploy them on missions with 50% or more success rates and buy new teams as soon as you can.