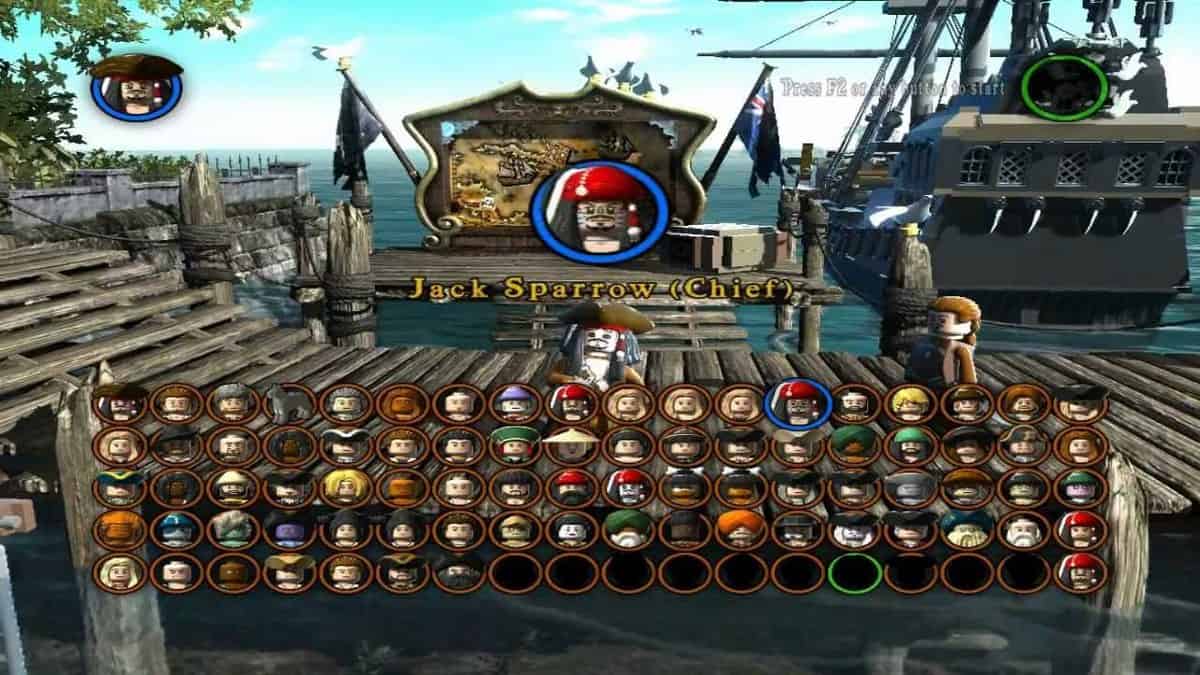 LEGO Pirates of the Caribbean is LEGO’s take on the dark Caribbean pirates movie with eccentric characters, along with a beautifully designed environment. It should be a real treat for kids and grownups looking for some light-hearted entertainment. This guide covers all the Lego Pirates of the Caribbean Characters and give you an insight into the people you will encounter.

LEGO Pirates of the Caribbean Characters

Jack Sparrow
He is fighting for the key to the Dead Man’s Chest. All his efforts are based on getting the key first before anyone else can.

Cannibal Jack Sparrow
Being a Cannibal he likes to rule his tribe (Pelegestos, the home of Cannibals). Cannibals have the tradition to sacrifice their leaders and this is where the things will go wrong for this variant.

Captain Jack Sparrow
His Tricorner hat can be used to tag him as he is almost never seen without it. His hat often becomes a topic of joy and mocking among his enemies.

Blackbeard
His black Magic and powerful sword are the source of terror and fear amongst all the other pirates. He has worries too as he is dependent on his daughter to do something about the prophecy by the claw of a one legged man (To find the fountain of Youth).

Will Turner
A humble blacksmith now has devoted his life for his loved ones who need him across the vast stretches of the sea. His hearth is locked inside Dead Man’s Chest which by definition belongs to his beloved wife. He is a cursed sailor now who can only step on land once in 10 years.

Hadras
This sailor appears like a sea creature. He has been transformed. Like many other pirates, Dead Man’s Chest is his target and you can’t let someone notorious like him to get his hands on the key to the chest.

dmiral James Norrington
Poor chap’s Fiance left him for Will Turner. He has been fighting for the lost honor and status and he will use everything in his possession to get his hands on Captain Jack Sparrow.

The Yeoman Zombie
This scary creature is known to sail the seven seas with the undead crew of the Queen Anne’s Revenge. Zombie word in his name explains many things about this character.

Horse Coach Driver
He is not exactly a pirate but surely is associated with the pirate company as he helps Captain Jack Sparrow to get away from King George’s man through the London Streets.

King George’s Soldier
He is the member of King’s army. Being a soldier his primary objective is to serve his master’s purpose that is to capture Captain Jack Sparrow.

King George’s Officer
He has higher authority in King’s army. His role is like a pirate hunter. Captain Jack Sparrow of course tops the hit list of all the pirates.

Captain Hector Barbossa
He like other pirates likes to roam across the sea following riches, fate or revenge. The Black Pearl is his prime target and he will leave grab every opportunity. Under his noble appearance is the wolf ready to eat everything.

Skeleton Barbossa
As the night prevails, this pirate assumes the appearance of a skeleton. He is desperate for the descendant of the Bootstrap to lift his curse.

Captain Barbossa
He is legless but still a powerful pirate and a strong contender to get the Fountain of Youth. He also seeks revenge from Blackbeard for his lost leg.

The Mermaid
Her body is half human and like a creature to live under water. She is well known for luring sailors into the water where nothing but death awaits for them.

Elizabeth Swann Turner
Her beauty parallels her strength.. This female pirate is one of the toughest and has proved her worth to the notorious world. Not to mention that she is also the wife of Captain Turner.

Philip Swift
He is a good soul caught among baddies. He has been taken as a prisoner and forced to help in the search for the Fountain of Youth. He may not be a skilled fighter but noble deeds are his weapon.

Scrum
Although he seems to be the friend of Captain Jack Sparrow on Queen Anne’s Revenge, he can’t be trusted as he can change factions for even a few pennies.

Syrena
She is a Mernaid. She can assume the minifigure form on land while in water she can be transformed into an aquatic creature. Captain Jack will meets him on the quest to find the fountain. Her beauty can easily betray you.

Angelica
Angelica is the beloved daughter of Blackbeard. She is a rival (also the past love) of Captain Jack. She hopes that Jack can lead her to the Fountain of Youth which she needs for her father.

The Gunner Zombie
He is a proud member of Blackbeard’s crew. He is one of his loyal men and plays an anchor to defend the ship from any kind of intruders.

Quartermaster Zombie
He is one of the most trusted and able officers if Blackbeard’s crew. He has proved his worth to Blackbeard in different difficult situations. He does not do anything without the consent of his master.

Joshamee Gibbs
Joshamee is Jack Sparrow’s best buddy. He is not a regular pirate and is a superstitious entity. Although most of his time is spent in rescuing Jack, he likes to tell the stories of their adventures in the free time.

Mr. Brown
You will meet him when you finish Port Royale mission. He owns the Blacksmith shop in Port Royal and he will help to arrest Jack Sparrow by hit his head with a bottle. Will Tuner is a student of Mr. Brown.

Anamaria
She belonged to Tortuga and had a small sailing boat known as “Jolly Mon”, but Jack Sparrow needed to find a ship and stole that boat from her.

Marty
He is a dwarf pirate who used to live in Tortuga.

Cotton
He is also a pirate from Tortuga who has his tongue cut out. As he couldn’t speak so he has his parrot trained to do that for him.

Pintel
He was serving as a cannoneer on the black pear as a member of the crew of Captain Hector Barbossa. He was always seen with his partner Ragetti and they both served together on the Black Pearl. Soon after they joined the mutiny against Captain Jack Sparrow, both of them along with the whole crew of the Black Pearl were cursed and they spent the next decade trying to lift that curse.

Ragetti
He was the crime partner of Pintel and served with him on the same ship. He has one glass eye which repeatedly fell out and he had to put it back. He had the same story with the as Pintel.

Sao Feng
He is actually a pirate lord of South China Sea who tricked the crew of the Black Pearl into thinking that he was on their side when they were going to rescue Jack Sparrow from Davy Jones. But he later on betrays them.

Tia Dalma
She lives in a shack on the Jungle River and is a voodoo priestess. She is the one that had Jack Sparrow’s Compass and other magical objects of the like. She also has the ability to see into other people’s future and their destinies.

Mullroy
He was a navy soldier at Port Royal and his duty was to guard one of the docks. His partner name was Murtogg. Both of them were daft but Mullroy was dafter and even more threatening.

Murtogg
He possesses the same qualities and backstory as Mullroy being his partner while being less daft, a bit brighter and suggestive than his partner.

Tai Huang
He is the captain of Sao Feng’s guards and he was stationed in Singapore when the whole plan of rescuing Jack Sparrow as taking place.

Lieutenant Theodore Groves
He is one of James Norrington’s crew when he was commandeering HMS Interceptor. The called Jack Sparrow as the best pirate he had ever seen and also witnessed his escape and him stealing the interceptor along with Will Turner.

The Cook
He was the cook at Queen Anne’s Revenge and was part of the mutiny against Blackbeard. When the uprising failed, Blackbeard punished the traitors and they were sent into the longboat. They were killed with flame throwers including cook. Cook came back as a zombie but now he was loyal to Blackbeard.

Koehler
He was a crew member on the cursed Black Pearl and served under Hector Barbossa with his partner Twigg. He first served under Sparrow but followed the mutiny and joined Barbossa.

Twigg
Companion of Koehler and has the same backstory.