GTA 5 Tennis Guide – How To Play Tennis in GTA 5, Tennis Tips And Tutorials, How To Serve 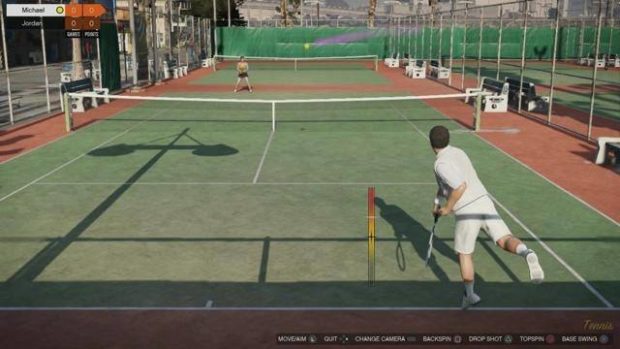 Ever since the launch trailer of Grand Theft Auto V, the most hobby that people have been excited about is playing Tennis. Playing Tennis is unlocked for Michael and Trevor by completing Franklin’s mission, ‘Complications’ and this GTA 5 Tennis guide will help you with everything related to Tennis in the game.

There are about 8 Tennis Courts in Los Santos which can be accessed anytime. In addition to those courts, there is on behind Michael’s house. Playing in this court will allow you play with Amanda. However, playing Tennis in GTA 5 is not easy as it seems and this GTA 5 Tennis guide will help you with all the tennis tutorials, how to serve, and how to win Tennis matches.

For more help on GTA 5, read our Triathlon, Darts and Golf Guide.

Tennis in GTA V requires some quick reflexes and focus, lack either one of them and you could lose horribly. However, without GT V tennis guide we will guide you through all the Tennis tutorials, all Tennis sets, and ho to win every Tennis match.

How to Serve
Once again, I’ll ask you guys to refer to in-game controls to know about them. Prior to serving, your character will be able to move halfway across the court on either left or right.

Press the serve button to begin serving and press it again when the marker reaches the red area for the most powerful serve.

Base Shot
Shots can be aimed by moving the left analog stick in either direction. The shot is signaled by a white marker on the court. The base
shot has an average bounce rate and normal flight time.

Lob Shot
Lob shot can be played by pressing Y on Xbox 360 and pressing Triangle on PlayStation 3.

Rules
Serving should only be done from behind the baseline and without bouncing the ball. You must serve correctly so that it lands exactly inside the serve box on the other side. Incorrectly servicing twice will give your opponent the point.

After a successful serve, the ball bounces on either side of the net until a player misses the shot.

Scoring
The scoring system is exactly the same as the real world Tennis. Read on to know these scores and the corresponding calls:

When an equal score is reached; it is called as a ‘Deuce’, for instance, 40 – 40. When such a situation arises, a character must score the next two points to win the game.

Tips
The best strategy to win the game is to keep your opponent on the run. Continuously change your angles and shot speeds to confuse him. If you have placed a shot on the extreme left side; aim for the extreme right in the next shot. Keep on doing this until your opponent misses a shot for an easy win.

That is all for our GTA 5 Tennis Guide with tips on how to serve, all tutorials, and how to win.