How To Fly Helicopter and Jets in Battlefield 3 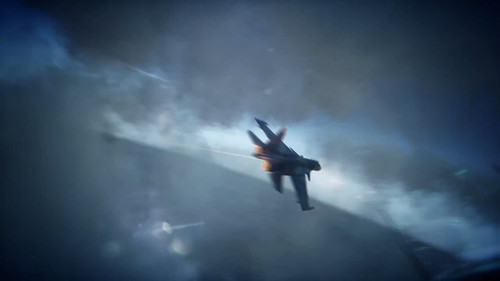 One of the gameplay elements that make Battlefield 3 cool compared to other modern first person shooters is its vehicular gameplay.

There are lots of cool, armed vehicles to choose from, including jets and helicopters. You may be alone when you are flying a jet in Battlefield 3, but it puts a great burden on your shoulders when you have to deliver your squad to a marked location in a helicopter.

Which makes learning the trade of flying these beasts is an ever important. In this guide, we will only give you a basic overview of things you should have in mind, when you are to fly a combat gunship or a lightning fast air craft.

For more help on Battlefield 3, read our Unlocks, Crashes and Multiplayer Guide.

Throttle
The total power given to the engine, more the power is faster the speed is. The throttle should be set on very high for sharp and quick turns.

Pitch
This is where the nose of the aircraft/helicopter is pointing. If you’re on a plain then your pitch should be downwards for descending and upwards for ascending, while in helicopters you have to slightly tilt it downwards to move forward.

Roll
When you roll your aircraft so your view is flipped to a side/angle. This is mostly used for aeroplanes as helicopters lose control by excessive rolling.

Yaw
This is a special way/wing for turning the jet in a proper way, mostly used for getting the jet exactly where you want it to be. You can yaw left or right and it is very much different from pitch,roll or banking.

Bank
This is an expert’s characteristic, it’s mostly a plane manuever but the helicopters can try it too. It is a mixture of different functions joined together (ascending,descending, rolling etc) for getting a better output in a professional way.

Freelook
You can freely look around the environment as a pilot when this function is enabled, your flight controls are temp disabled.

Helicopters are VTOL – Vertical Take-off and Landing machines, their motion is very limited and are mostly used for the ground support. You will have to be very skillful if you want to take down an aircraft with it.

Lifting the Chopper
To lift up the helicopter, you will have to provide enough throttle (turn it up) and for descending it, simply lower it down but not to off. The throttle/power is mostly decreased when you are turning (yawing, pitching or rolling the chopper)

Moving Forward/Backward (Pitch)
You can simply move forward by pitching your nose downwards (slightly) and if you want to go backwards, pitch the nose upwards.

Turning (Banking Turn)
Slightly roll the chopper to any side where you want to bank, make sure that you give it enough moving power so it stays in the air and does a nice/steady turn.

Hovering
The best part about the helicopters is their hovering (ability to stand stationary at a single spot) – The main reason to why it is used as ground support. You can easily take out a bunch of enemies if you’re at the right spot, communicate with your gunner and ask him the way he/she wants it to be.

The trick for hovering the chopper is totally dependant on your throttle’s power. You have to maintain it in such a way that your chopper doesnt ascend nor descend, if you provide a lot of power then it will keep on rising and if you provide a low throttle then it may fall downwards and result in a crash.

Landing
The chopper can land just anywhere, the surface must be plain and according to the helicopters size, you can land it in the battlefield or somewhere on the mountains, just make sure that you descend it properly.

Combat Aircrafts are tricky to fly so it is really important you fly each with their requirements in mind. Maintaining the minimum speed is crucial here.

Taking Off
The aeroplanes need a large, clear piece of strip (runway) for landing and taking-off. Throttle-up to the maximum and then slightly lift the nose upwards for taking off the ground, make sure you maintain the speed and stay airborne for that you will have to stay up to a particular speed, the maps in battlefield are big enough for that.

Turning
Another way to turn your jet in a faster/stylish way is via rolling. Roll to the side you want to turn towards and start climbing, this will simply turn your plane towards that side.

You should keep it in mind that when you roll your throttling power divides and you lose some of your altitude by that. So just make sure that you are high enough and not in the danger of crashing. You will have to practise a lot to get a proper hand to this.

Ground Attacks
Ground attacks have to be very much pre-planned. Observe your target and go a little far from it, so you have a proper sight. You will have to nose down (which results in descending your altitude) to aim the ground unit so make sure that you maintain a good altitude first.

If you keep such simple steps in mind, then it wont be that hard. Just keep in mind that how much time you need to engage/takeout the number of targets you’re fighting against and then gain your altitude and distance by that.

Landing
You can land your plane to any flat surface which is big enough for a proper landing. Simply slower it down and with the landing gear opened touch the land – in a proper landing way with it in a straight/vertical position to the surface. If you dont want to consume all this time or cant find a place to land on, you can just eject.

Practice, Practice and More Practice. You would most probably crash a few times and have difficulty in flying these vehicles when you start, but as you play more Battlefield 3, you will notice improvement.

Practice flying close to the ground, try different maneuvers and when you have a confident feel about the controls, you can pull off the same stunts in a competitive match but it would take a serious getting used to.

Take a good look at the HUD – this is important and try to keep your head when you are flying. Helicopter can have a gunner as a support so when you have a supporting gunner, keep him in mind when you try different maneuvers. You obviously want to give him best shot to attack the crawling enemies on the ground.

You can give your gunner maximum room by aligning the small circle in the flat rectangle at the bottom of your Heli-Hud. The small circle shows the direction in which your gunner is firing so if you want to give him a better chance to take out the enemies, move into that direction.

Flying jets and helicopters with Mouse is definitely hard, so either go for Joystick or controller or re-map the keys of your mouse. Alternatively, you can decrease your mouse sensitivity.

Make sure you have the right combination when you fly. Having an engineer if needed or an Assault class soldier in a passenger helicopter, will definitely gives you an edge.

If you are a veteran Battlefield Soldier and have experience flying these jets and helicopters, do share your experience with us in comments. May be these tips will help reduce the random crashes in the Battlefield and help save the soldiers in the long run. No ?