How To Customize FIFA 12 Keyboard Controls 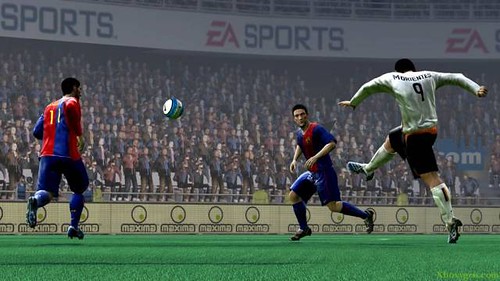 One of the most important changes FIFA 12 brings to PC players who still like to play with their keyboards, is the ability to customize the keyboard controls.

If you remember, most of the PC Gamers experienced difficulties in performing all the skills and tricks with FIFA 11 Keyboard Controls. In FIFA 12, it has become even more challenging to customize the keyboard controls in a way that would allow you to perform all the FIFA 12 Skills/Tricks. Standard attack options, you can change them to what you are used to when playing FIFA video games.

Menu options and standard squad controls. You should be fine with menu option controls but for squad controls, you may need to assign them to your thumb or something so you can change the tactics on the go. Though, I feel default options are your best shot! Now dribbling is a bit more difficult this time. You will need to practice placing one finger on Numpad controls for precision dribbling or performing skill moves. It will require a great deal of practice for default controls but if you can assign to these controls those keyboard buttons that you can press with thumb, it may get easier to do these skills.

Press CTRL to move to the next screen of your Controller Settings. It will take you to the defending controls page. You can edit these controls the same way you did for Attack. Defending is a daunting task in FIFA 12.

Automatic tackling has been reduced to minimal and manually tackling requires a great deal of practice and timing before you can successfully defend your goal. Containing has been changed and automatic pressing removed, so defending in FIFA 12 is a different ball game compared to what we were used to in earlier FIFA games. Standard defending controls. You can change them to your liking or to whatever you used in earlier FIFA video games. Important controls here are Contain S and Teammate Contain D. You can contain an attacking player with S – it will only place your player in front of the attack, no automatic tackles remember.

You will still have to time your tackle to get the ball from the opposing player. Teammate Contain calls a teammate into action to contain an opposing dribbler. Your teammate defending the attack will only tackle if he sees opportunity.

Jockeying is also important – it helps you defend counter attacks. Pressing the button assigned here will drop back your defenders so your other defensive players have time to recover.

You can also tackle the opposing player while jockeying but it is a risky move and if failed, will leave you out of position and may give a clear goal scoring opportunity to the attacker.

Standard menu options and other tactical options that I have already gone through while explaining attack controls.

In these controls, Offside Trap and Team Press are two of the important defensive maneuvers you need to master. Try to assign, an easier to access button to Offside Trap or assign the one you are used to.

It will require some practice but would really help you keep a highline of defense against the toughest of opponents. These are the controls that most of the people neglect while playing FIFA games, but those who master them, have advantage over their opponents in verses matches.

If you are not satisfied with in-game options that FIFA 12 gives you to customize keyboard controls, you can edit buttonDataSetup.ini to get your desired keyboard controls. Search the file with “keyboard” keyword and edit the button mapping as you want. This has been explained in detail in our FIFA 12 Crashes troubleshooting guide.

Use FIFA 11 Keyboard Controls For FIFA 12

If you know any other way and or want to share your control settings which make it easier to do different skills and moves/tricks in FIFA 12, don’t hold back. Tell us in comments below!