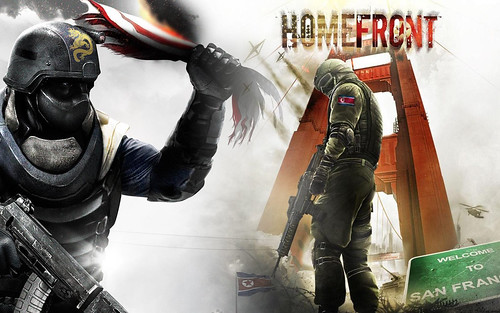 Kaos Studios have decided to reveal a timeline leading to the events that would occur in its upcoming first-person shooter Homefront, set to be released on March 17, 2011 (North America) and March 18, 2011 (Europe).

Set in the year 2027, Homefront’s story is based on a fictional timeline that includes events which lead to the invasion of the United States of America by the Korean People’s Army. The developers claim that though the chances of this timeline coming true are slim, the year-by-year events are plausible enough, hence making the storyline of the game itself plausible.

The timeline starts from 2010 and chronically goes up to 2027, explaining the political events that lead to the rise in power of the Greater Korean Republic and the collapse in power of the US. We’ll chronologically have a look at what happened (or what will happen…?).

2010
North Korea’s torpedo sinks a South Korean’s Navy ship, taking the lives of 46 sailors. The United States describes the event as an ‘act of aggression’, and states that they will be in constant consultation with Japan, South Korea and China to determine the response to this act. The White House says that this event cannot go unanswered by the International Communities. (Note: These events did in-fact take place in real-life in 2010)

2011
North Korea has done another atomic test which has concerned many countries of the world about North Korea’s motives. They face yet another UN sanction against the test. Kim Jong-il defends the tests stating that it is a direct response to ‘western aggression’.

2012
North Korean dictator Kim Jong-il dies due to a sudden stroke. Investigators reveal that the supreme leader’s health had been in decline for quite a few years. His son and appointed replacement, Kim Jong-un, releases a press statement praising the reign of his father, committing his government to a brand new era of peace and openness. On the other hand, South Korea took Kim Jong-il’s death in optimism, hoping that the 60 years of constant war between the neighboring nations is close to an end.

2014
The United State’s motor industry declares bankruptcy for the second time, claiming that they are not financially able to create the required type of hybrid vehicles.  The White House is informed that a second bailout is highly unlikely, because with rising gasoline prices, economical cars rather than luxury-styled symbolic vehicles are in demand.

Additionally the United States decides to withdraw its forces from former South Korea, claiming that with the reunification of Korea there is no longer a need of heavy US military presence in the region. Critics, however, believe that the US was forced by Unified Korea to make this move.

2015
Oil deficiency is felt all over the world as gasoline prices rise to the dreaded 20 dollars mark in the United States, due to war between Iran and Saudi Arabia. Meanwhile Russia gets Ukraine to sign a mutual interest pact to cut oil supply to Europe. Survivalist literature becomes the most read and best-selling literature in America. Additionally, the People’s Republic of China’s influence on world economy diminishes.

2016
he United States withdraws its military forces from Japan and other Asian countries, stating that it is best to focus on ‘defending’ themselves from any sort of foreign attack. Texas declares partial sovereignty from the United States; instability and bloodshed takes place as refugees from neighboring states attempt to enter Texas.

2017
Due to lack of taxation, martial law is enforced in the United States. Infrastructure crumbles as the North East of America is crippled by blackouts and power outages due to unstable energy grids. Governments all around the world experience a sharp decline in tax revenues as global trade becomes dim.

2018
Japan is occupied completely by the Greater Korean Republic as it surrenders itself. Meetings are held to merge the governments, economies and industries of the two nations to make a vassal state. The Unite Nations, led by the United States greatly condemns the Korean occupation of Japan and express serious concern over the increasing power of Korea in the region, passing a resolution against the act.

Many neighboring nations like Malaysia, Indonesia, Philippines etc vote against the resolution as they provided the Koreans the necessary materials to enforce the occupation. The Korean Government responds by completely disengaging from the UN and fueling speculation that only the threat of force would bring the country in line.

2019
The United Nations is dissolved, while martial law is still being enforced in the unstable United States.

2020
Canada closes its Northern Borders to Americans. Order seems to be getting restored back in the United States by the US military. Military food and ration becomes dependencies for the American citizens.

2023
The Knoxville Cough desolates the entire United States. Hospitals are overfilled and there is no proper vaccine developed for the viral disease. Emergency broadcasts take place advising against going out for shopping, avoiding contact with strangers, going to hospitals, going for work, basically making the people prisoners in their own homes.

The Greater Korean Republic intervenes in the civil war that has broken out in Nigeria, suggesting that it is a ‘true peacekeeping mission’. North Korea also offers military and general aid to the United States which is flatly rejected by the despite-desperate US Government.

2024
The GKR release a next-generation GPS satellite, claiming that it shall bring a message of global peace and unity to the world. The US has no competing satellite in orbit as it was forced to cancel its GPS system due to internal turmoil and instability.

2025
On January 16th, 2025, the GPS satellite releases a massive EMP burst, causing a complete blackout and completely destabilizing the infrastructure of the United States. From January 18th to the 20th, Korean troops occupy Hawaii and the west coast. Small resistance is offered by the crippled US military but an overwhelming counter-attack is heavily anticipated from the Korean Army, causing a retreat of the army.

2026
The United States is split into two as Korean forces eradicate and occupy the Western side. The Mississippi river is irradiated with radioactive iodine, preventing any connection or communication between the West and East Americas.

2027
Public executions, starvation, mass graves and labor camps are the call of the day as the US Armed Forces are completely scattered and powerless, with the Korean influence increasing. Resistance is offered in small numbers by once normal civilians. Suicide bombings, guerrilla wars and hideouts are all that they have to fight back with. It’s time to stand up, and fight the Koreans in the same place we once proudly called home.

That’s pretty much it. What are your thoughts about it?