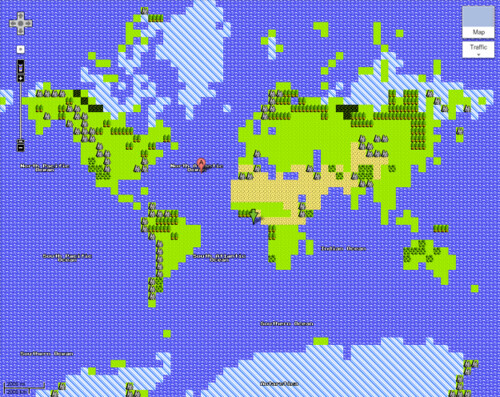 Yeah, April 1 is one of the most annoying days to be reporting about games – you know why? Because of April Fool’s…and it’s quite easy to misinterpret something as actual “news” when it’s in fact, just a prank released by publishers or developers as an April Fool’s “treat.”

Well, lucky for you there’s us who’s going to save you most of the trouble in distinguishing what’s real and what’s not – though keep in mind that this list isn’t complete.

1# 8-bit Google Maps
This is what you see in the top image. Open Google Maps and on the left column, start the quest to initiate your 8-Bit journey.

4# Square Enix announces Chocolate Dimension in Quantum Conundrum and the “official” press release can be read below.

Square Enix Inc. the publisher of SquarE Enix interactive entertainment products in the Americas, and developer Airtight Games today revealed that they’ve been able to fold another dimension into the first person environmental puzzle game Quantum Conundrum. This time, however, instead of harnessing the laws of physics, the new dimension will manipulate the fundamental laws of chemistry.

In chocolate dimension, players will have new options available as they work their way through Quadwrangle Manor:

People are probably wondering, ‘Chocolate dimension? What’s that all about?’,” said Kim Swift, creative director at Airtight Games. “Chocolate is fun! Chocolate has all sorts of amazing properties! Who doesn’t love chocolate?  And besides that, it looks a lot more appetizing than hummus dimension.

Players will get their first taste of chocolate dimension when the game launches later this summer.

The official statement from SEGA reads:

“People all around the world have been enjoying a glass of wine since the ancient times, and it’s played crucial roles in many ceremonial and social occasions since then. Some people make their own wine at home, but it’s an expensive and laborious process, and therefore not available to the average person.

Even fewer people are able to experience the joy of growing their own grapes due to cost, lack of land, or not living in a grapevine-friendly growing environment. That’s not the way it was ferment to be! You may have already heard this through the grapevine, but to fill this void, we’re proud to announce an addition to our “Virtua” series with Virtua Vineyard.“

6# SEGA also shows off Bass Fishing of the Dead

8# Prototype 2 – Who is P.A.M?
An intro video to the most bad-ass hero, you have never seen before!

To read up on everything that’s been unearthed so far for this crazy day, click here.