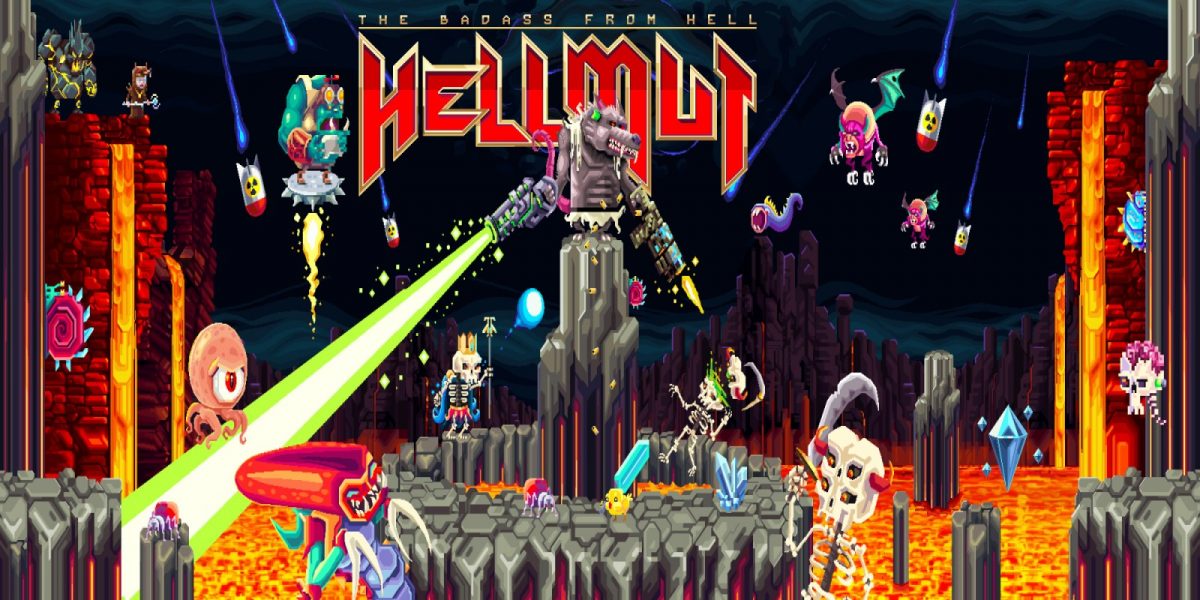 Hellmutt: The badass from hell is just as whacky as the name suggests. Think of Doom but as a top-down shooter. All you’re doing is blasting demons back to hell while an all-knowing eye mercilessly roasts you. The game is also coated in a pixel retro art style with similar tastes in music.

So the story obviously isn’t going to be very deep or gravitating. It’s simple, you’re a scientist seeking immortality. In doing so, you accidentally let the armies of hell loose on Earth while they simultaneously steal your body. Bummer right? Taking some sort of interest in your situation, the mysterious eye of Ka-rah decides to help out. He grants you immortality as a floating skull and spine that can fire laser beams. He also gives you an arsenal of transformations that act as enhancements and bonus lives. Your objective? Get your body back. 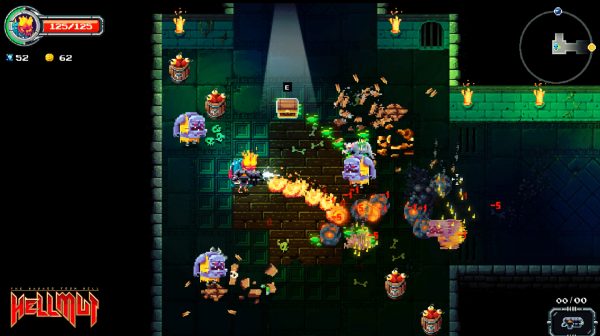 Now as I mentioned before, the game is played from a top-down perspective. It involves isometrically aiming around yourself to take down demons of all sizes and shapes. The screen can get very filled with enemies, traps, and projectiles sometimes hence why the game also falls under bullet hell. You play as the remnants of a mad scientist, an enchanted skull and spine. You can defend yourself with a shotgun like pulse emissions and a laser beam. It’s not reliable to fight in this state, however.

That’s where the transformations come in. One of the gifts Ka-rah gives you is the ability to collect bodies. Bodies that actually form you can use. Each form has its own set of attributes and skills. This means they also have their own respective learning curves. Mind you the curves aren’t steep or difficult but there’s a lot you can do with them.

There’s the Stitch monster, a tanky fleshy goopy mess that doesn’t move around very fast along with a slow rate of fire. Though you can use yourself as a projectile to slam into enemies and shockwave the ones around them as well. There’s also the rat king, a more agile long range character. His projectiles also ricochet and can be fired up to 3 at once. His health goes down really fast though to compensate for that. The slimeball was another example, a laser beam focused transformation with a lot of crowd control capability. 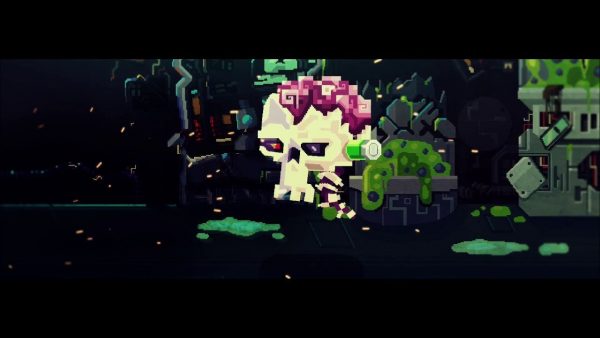 The level design and map layout overall is of dungeon crawling. You’re supposed to climb levels of a castle by clearing floors and beating down bosses. Each floor has rooms full of enemies, occasionally a chest and sometimes traps. You’ll also find a shop to buy items/weapons/upgrades and lastly, every floor has an eye of ka-rah challenge. Completion of this challenge will give you a transformation to use only once in that playthrough. This also works as a bonus life.

You can afford to continue the game if your transformation dies. If you die as the skull though, you die for real. Hellmutt definitely brings back one classic gameplay mechanic in that regard. If you die, you gotta start from the beginning all over again. You do maintain whichever transformations you unlock. But you have to start from the beginning everytime. While the mechanic can be seen as frustrating, it’s also unique in gaming nowadays. Limited lives and permadeath was something we haven’t really experienced in games since the Arcade gimmick to get more tokens out of a player.

The thing about the level design is that it’s pretty redundant. I do like the concept but it doesn’t change throughout the game. This adds a light layer of frustration to the permadeath factor of the game. You dread having to do everything all over again which adds to the pressure of not dying. That’s why you need to manage your transformations very carefully. It helps to always stock up on medkits at the shop of every floor. Do the challenges whenever you can as well. 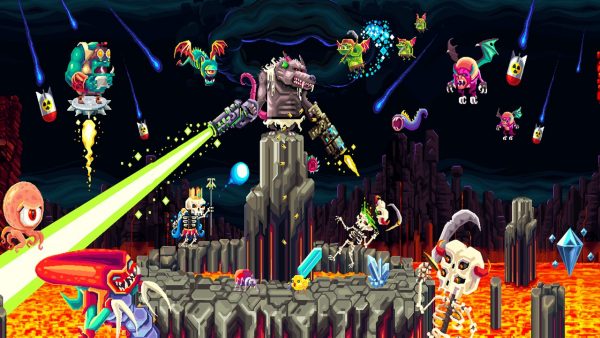 The visuals and sound design of the game are great for what they were meant to represent. Although I won’t commend them just for using the pixel aesthetic since a lot of games nowadays bank on that art style for the nostalgia factor. However, Hellmutt does a good job of capturing the overall classic vibe. It’s not just another pixelated game like most of the arcade rip-offs. It houses several classic aspects. The music being a major one since you can pick between modern music or the old style of pixelated 8-bit music. The beats are very fun to listen to as you go floor to floor gunning down demons left and right. The sounds of every weapon and enemy in the game are also great. I also like the spectacle of pixel blood splattering everywhere accompanied by 8-bit screams of agony and defeat.

The boss fights in the game are refreshing takes from the usual dungeon crawling bullet hell. The bosses have their own special arenas with the occasional environmental advantage one of you have. Such as chucking an explosive barrel at them or walking into a spike trap while strafing. 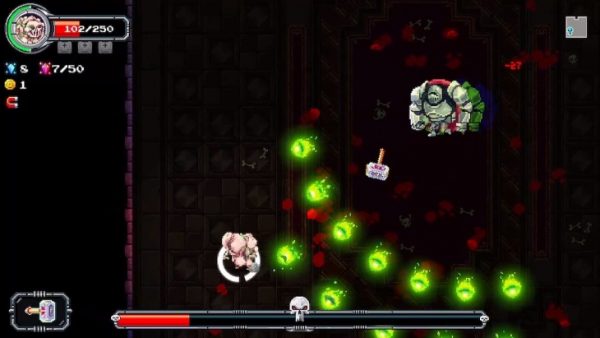 Hellmutt definitely missed a big opportunity to make the game couch co-op. That would’ve added a nice layer of replayability with a friend. Plus the way you could choose and combine the teamwork of different transformations could be fun. It’d also be entertaining to escort your skull friend around if they lost one of their forms.

I did also admire that the game had no exposition whatsoever. Demons steal your body and an all-knowing eye gives you immortality. That’s literally it, now go raze hell. You get thrown into the action almost immediately. The difficulty curve doesn’t go up or down either due to how straightforward the gameplay is.

That’s the thing though. The gameplay is fun and simplistic but also repetitive. Once you finish the first castle floor and beat the boss, it’s just a matter of repetition after that. This is hardly a big drawback since almost every game has repetition to make it work. But since Hellmutt is a stylish indie-game, there isn’t too much to offer.

Still, I’d definitely recommend playing this. It’s a great pastime you can turn your brain off to enjoy. Of course, it can get seriously stressful when you’re trying hard to win.

What better pastime than to just shoot up hell and get your body back from demons? All wrapped up in an amusing retro package of bullet hell goodness.