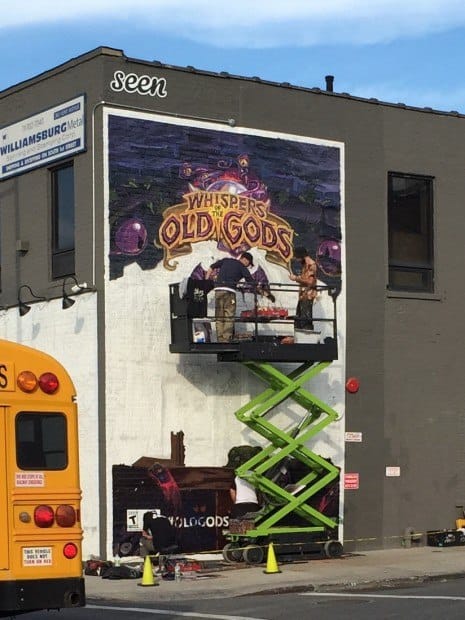 The rumors regarding Hearthstone Whispers of the Old Gods expansion came in last month when an alleged release date for the unannounced expansion was also revealed. But obviously, that was the first time something like that came up so we digged deeper and found that Blizzard indeed is planning to make some announcement relating to Hearthstone.

However, the developers have not officially told us what the announcement is about so we just had to look a little further. And guess what, we stumbled across this new advertisement that is being put up in Brooklyn.

Without leaving out any doubt, the huge poster in question reveals that Hearthstone Whispers of the Old Gods is indeed the next expansion in the game.

Sadly, the ad in question was not complete at the time when this photo was taken, you can see people still painting it, but the name can be clearly seen and so can the ESRB rating.

The ad has gone up in Williamsburg, Brooklyn a couple of hours ago which is incidentally a day before March 11 i.e. the date of the Winter Championship where Blizzard Entertainment has promised to make a “special Hearthstone announcement” relating to “what’s coming next for Hearthstone.”

This leaves little doubt in our minds that the next expansion for the game not only relates to the Old Gods from Warcraft but also that it is going to be announced tomorrow.

Tell your friends! Hearthstone Whispers of the Old Gods expansion is all but confirmed now! Oh and if the initial rumors are true as well, this could be released in a month and a half’s time on April 24, 2016.