God of War Treasure Maps Locations, How to Solve 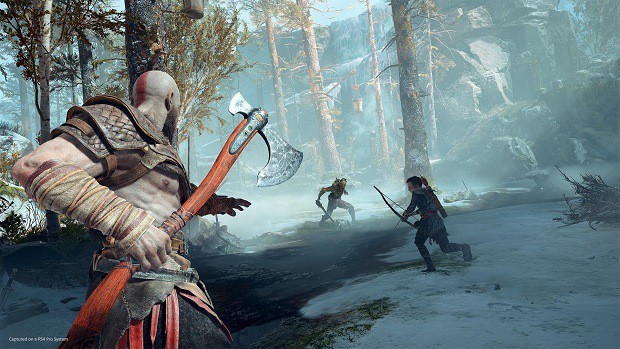 The realms of Norse mythology were known for their hidden treasures, which will be the same in God of War except that players must first discover the treasure maps and then set out to find mark X marks the spot. The following guide will hence prove fairly useful in unearthing those treasure chests quickly.

There are twelve Treasure Maps that you must find and collect in God of War. You cannot directly go for the treasure even if you know the location and must first solve the treasure puzzle.

How to Use Treasure Maps in God of War

The maps are in a foreign language so Atreus will help you decipher them. Once he deciphers a map, the scroll’s description is added in your goals tab, which you must solve to find the exact location of the treasure.

You cannot directly aim for the treasure, you must first find the GoW Treasure Maps, decipher it, and have it added it to your Goals before you can start hunting for treasure.

Below you will find the location of all 12 God of War Treasure Maps as well as their respective Treasures. Treasure in GoW are one of the easiest ways of Farming some Easy Hacksilver. 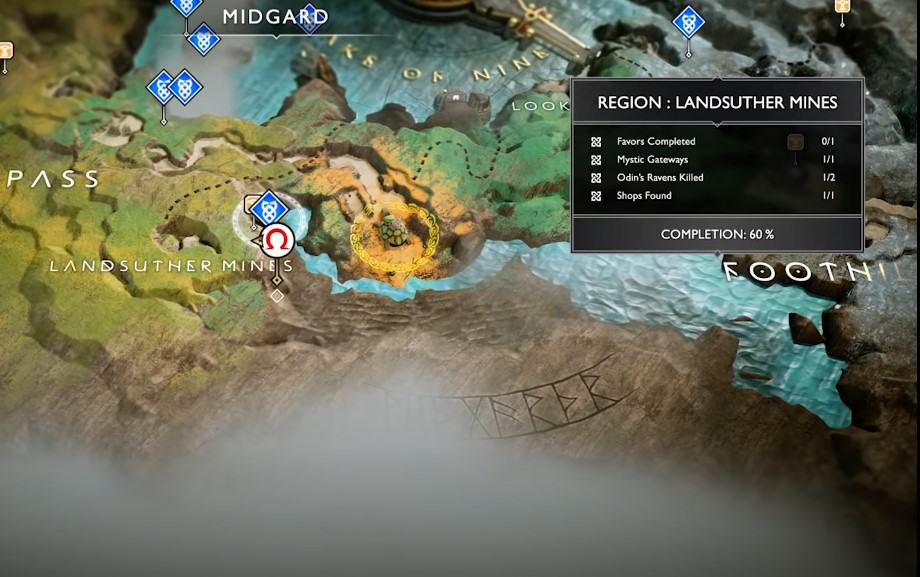 This treasure map is available after the second water drop and you can find the map in Landsuther Mines. In order to access the mines, you need to follow Brok’s Favours, and pick up “Deus Ex Malachite” which will grant you access to the mines.

In the area, you must head to the lift. The Keep in mind that this cannot be accessed from the main floor so you will have to climb down in the hole and then take the lift to get up to the place where the map is located.

The map is found right next to the coffin inside the lift.

How to Solve Kneel Before Thor Treasure Map

Once you have collected the God of War Treasure Maps and Atreus has deciphered it, your next location is Lookout Tower where the treasure is located. It is at the southeastern part of the Lake of Nine.

You will need to climb to the top of the Lookout Tower and access the hidden beach behind the statue of Thor. Use the rope to slide down there.

The treasure is sitting on the right side of the Kotnar Shrine and Thor’s foot. It’s found at a single location i.e the base of the Thor statue. It consists of an enchantment, an Unstable Ore, 3 Hardened Svartfalheim Steel and 20000 Hacksilver. 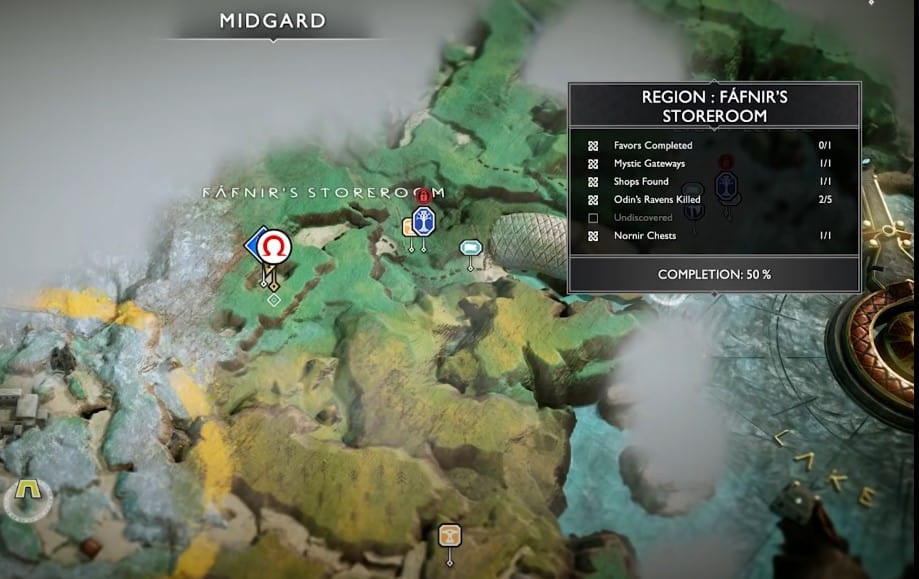 You can get this treasure map once you have returned to ‘black breath’ with Alfheim light. Do the Fafnir Sidequest, which leads you to his Storeroom in the middle of the rotating temple.

Head to the area where you need to insert the Key Orb. The map is lying near this place.

This map is easiest to collect while you are on the ‘Sindri’s Fafnir’s Hoard’ favor. Collect the map and have Atreus decipher it.

The location of treasure for this map is Foothills so your next destination is the Foothills. Once there, start climbing the mountain until you have reached the entrance of Peak Pass.

Right outside the entrance, look for a mound of dirt near the edge of the cliff. This is the location of the treasure. Interact with the mound to collect the treasure.

The mountain you’ve reached has a face on it, however, Bifrost Crystal is required to Solve this treasure map, therefore, head up the mountain till you’re just below the face then slowly start heading back to the path till you come across the stone pile. 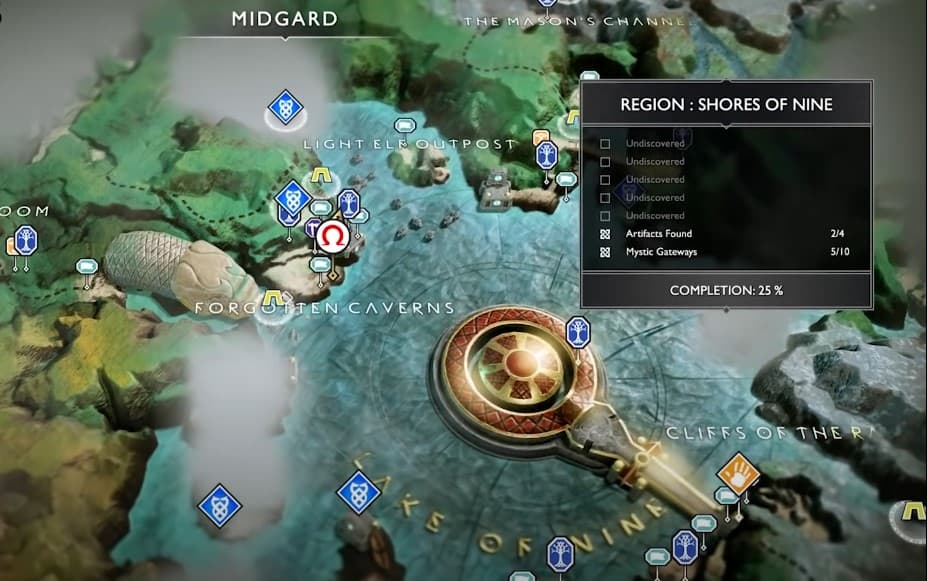 This treasure can be obtained during the ‘Family Business’ favor. For the map, you must head to Forgotten Caverns.

During the mission, when you arrive at the beach, dock your boat on the west side of Lake of Nine. Get off your bat and head towards the location where some wolves are eating a corpse.

It is right past the Mystic Gate. Kill the wolves and head to the location where the gear that opens the gate to King’s Hollow is present.

Find the map right next to a chest near the broken gear. Once Atreus deciphers it, you will get to know that the location of the treasure is Northri Stronghold.

During the ‘Family Business’ favor, you will be required to activate the waterwheel here and then open some gates. After you have opened the first set of gates, you must climb the perch above the dock to locate the treasure. 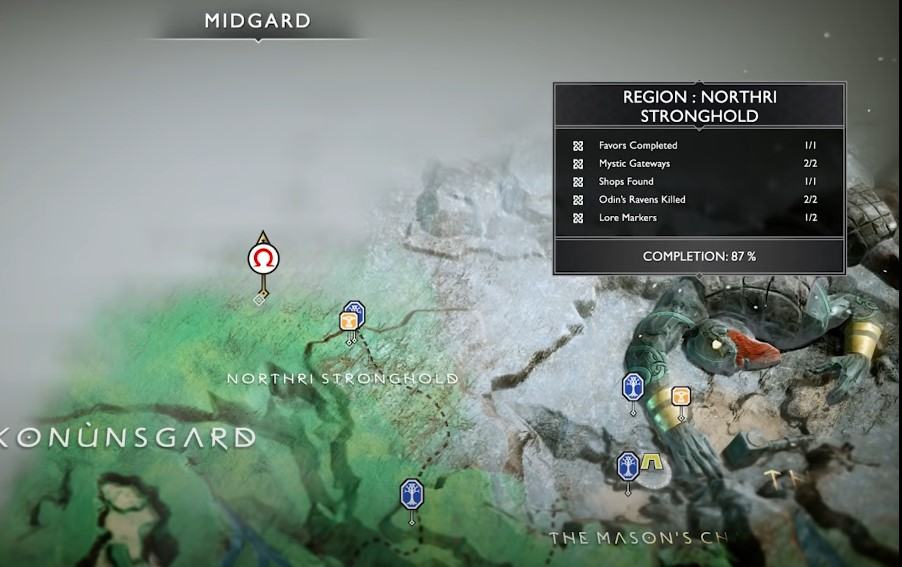 This map can be collected after the second water drop. You can collect the map for this treasure in Northri Stronghold.

Once you are done with Sindri’s first favor, start the second favor ‘Family Business’ and continue following the mission until the point on which you must defeat the traveler at the ship.

On this ship, you have to destroy a weak point in the lower deck of the ship. This weak spot can be found on the northwest side of the ship. Here you will find the map.

Have Atreus decipher the map and you will get the location of Njord’s Oarsmen for the treasure. Head to the location and get to Mason’s Channel.

To access the location where the treasure is located, you need to head to Sindri’s shop and climb the cliff near it. Once you are up, head right and you will reach the location.

Simply head straight to the Stone Falls at the east side of Lake of Nine. Head up the side of the mountain from the mystic entrance and reach the first ledge. Go right and up through the tunnel to reach the treasure at the end. 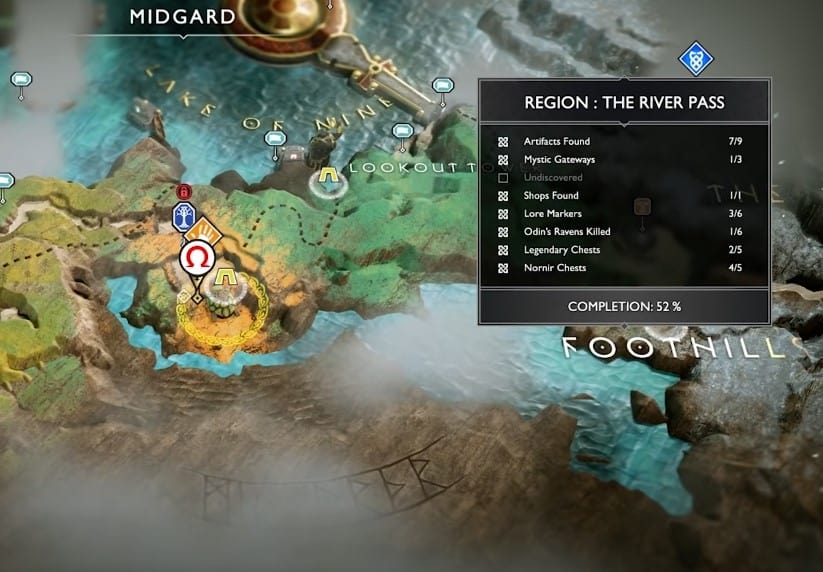 Once you have acquired the Mimir’s head, return to the Witch’s Basement to find the treasure map. The treasure map is located in the small eastern room outside the Hidden Chamber of Odin.

Create some light bridges with the help of Atreus and then a shock arrow at the end will allow you to access this small room.

How to Solve The Turtle’s Tribute Treasure Map

Collecting the map and deciphering the map will reveal the location to be River Pass. It turns out that this time; the treasure is not too far from the map’s location.

Get out of the basement and make your way towards the turtle. On this path, you will find a mound of dirt on the right side near some giant stones. This is your treasure location. Collect the treasure. 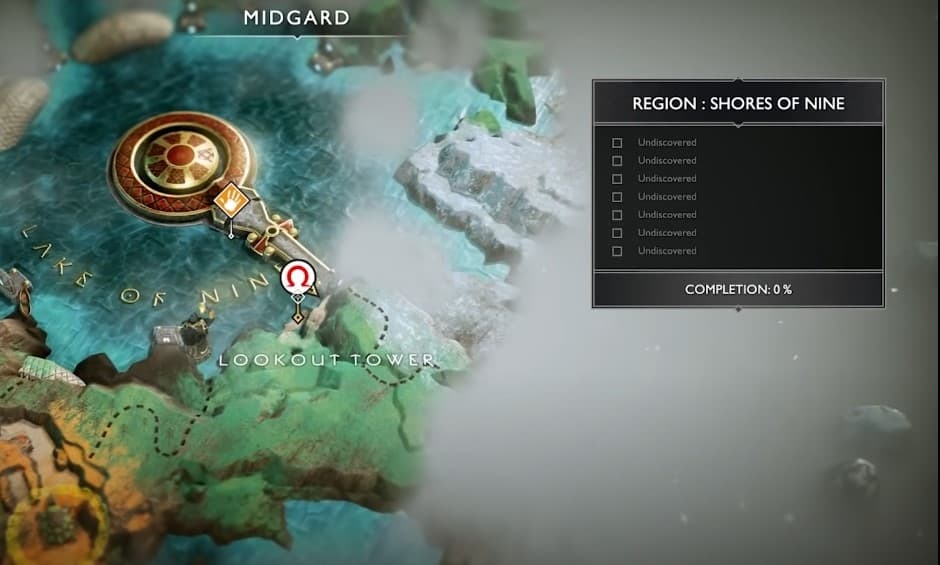 This treasure can be collected after the first water drop. You can find the map in the Lookout Tower. You can collect the map right before the second water drop.

You can either enter the Lookout Tower from Vanaheim Tower or simply use a boat to get to the dock and park your boat there.

You will find the map sitting on the right side of the dock.

Let Atreus decipher it and your next destination is revealed. The treasure for this map is located in Veithurgard. The easiest way to collect this treasure is during the ‘The Imprisonment of Otr’ favor.

Head left of the area and go towards the large door with spinning rock locks on it, deal with adversaries then head left of the door and look for the treasure in the middle of the gate and the lore marker near it. 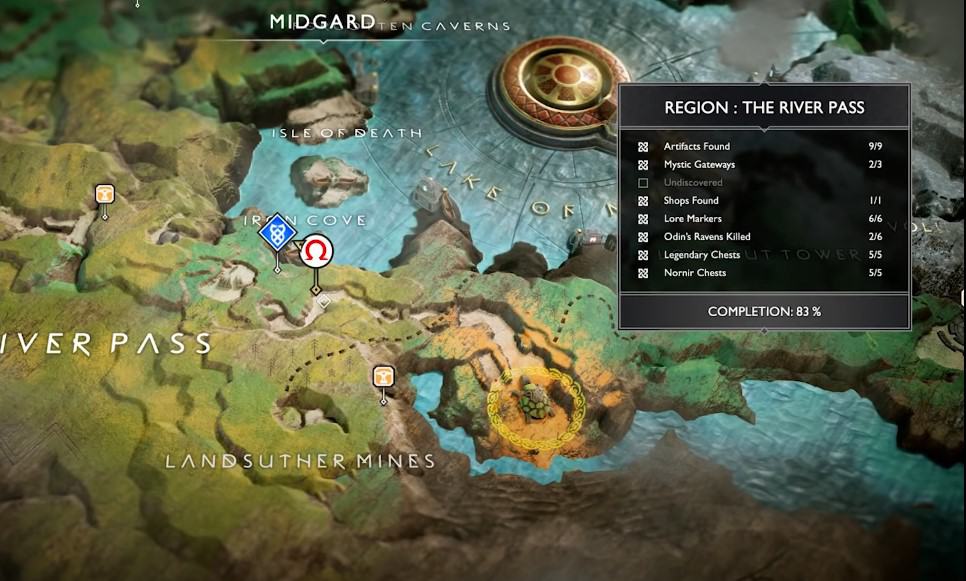 This treasure can be obtained after the second water drop. The location for the map you seek is Iron Cove. You will have to use a boat for this map.

Get in your boat and reach the southern beach of Iron Cove. Once there, look for some crates and barrels there. The map is located here.

Find the loose boards here and head west of them to locate the treasure. You will have to deal with a Draugr before collecting the treasure. 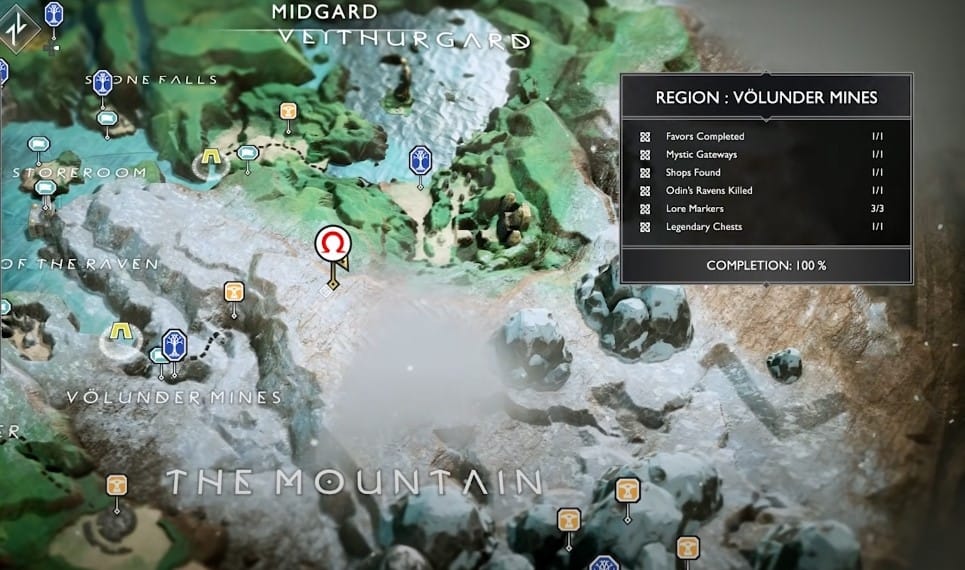 This treasure is available after the first water drop for collection. To collect the map, you must first head to Volunder Mines.

During this favor, once you have defeated the Revenant, find the path on the right and go along it to find the map.

How to Solve Dead and Bloated Treasure Map

The location of the treasure is Cliffs of the Raven. Once there, you will have reached the beach on the backside of these cliffs. There you will find a troll’s corpse. Look on its right side for the buried treasure. 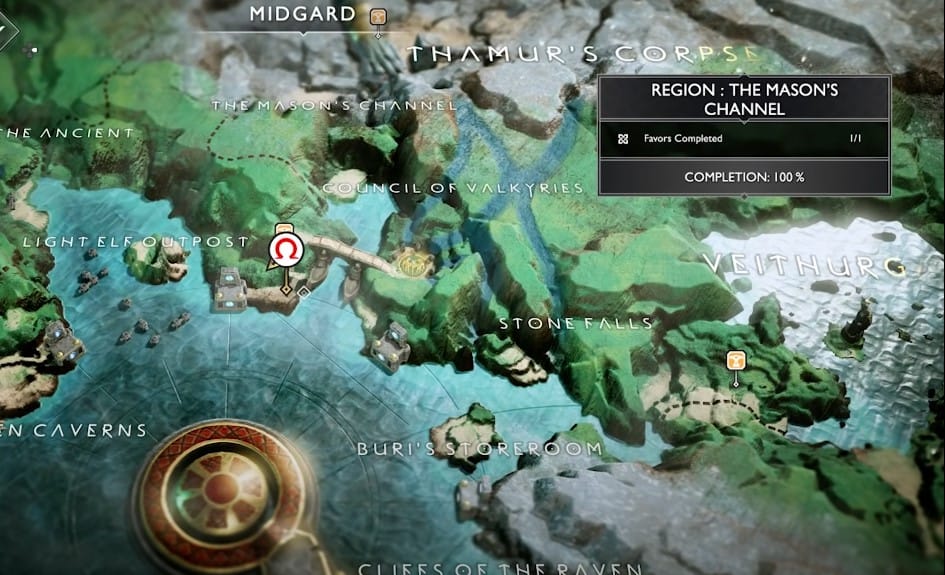 You can collect this treasure after the second water drop. To collect the map, you must head to Helheim Tower Beach. The map is fairly easy to find.

Look for it in the middle of the Helheim Tower and Njord’s Oarsmen. When you dock your boat here, look on the left side.

How to Solve Island of Light Treasure Map

Your next destination is Light Elf Outpost for the treasure. Once there, you must make your way around on the outside of the island.

Find the path that cuts under the high-water dock. Keep heading down this path and turn left until you come to a chain leading down. Go down and look on your right side to find the treasure. 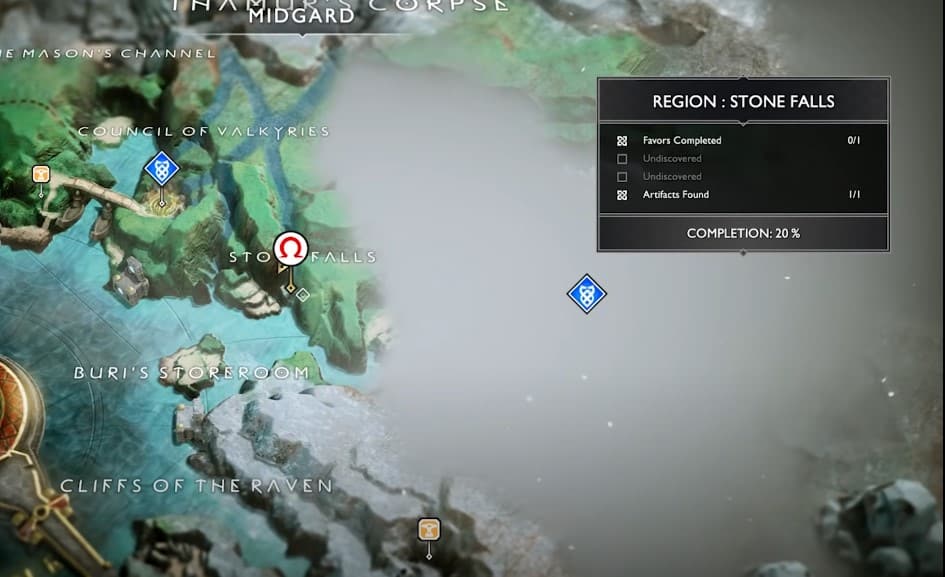 How to Solve The Boat Captain’s Key Treasure Map

To find the treasure, you must now head to the Isle of Death. Climb the dock there before the second water drop. Once the water has lowered, head towards the highest point of the island. You will come to ship wreckage.

The treasure is located inside this wreck. The mound of dirt marks the location of the treasure.

The treasure is collectible after the second water drop. Head to Mountain Summit once more. While you are on the main path through the tunnel, look for it sitting in the middle just before the Frost Ancient. Collect the map and let Atreus decipher it. 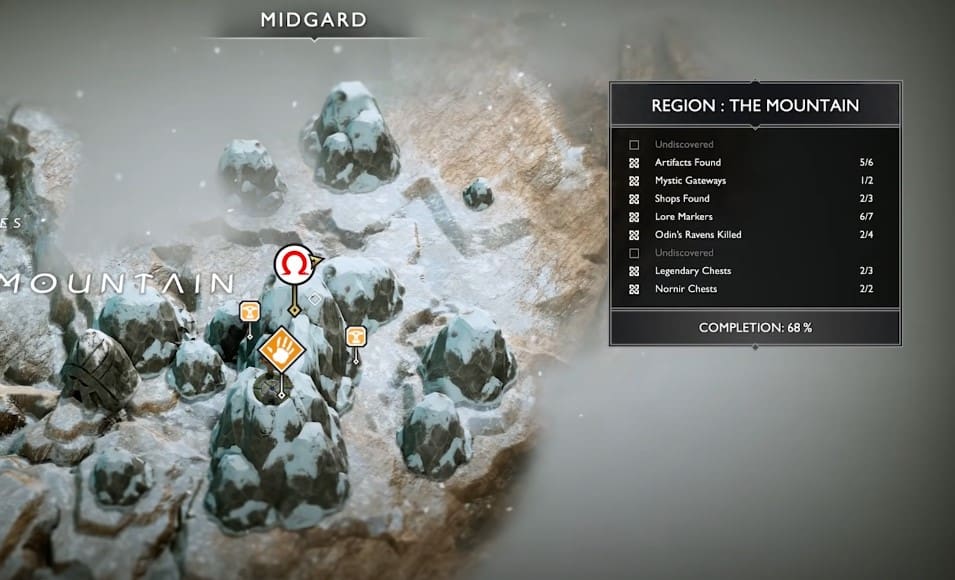 This time, your destination is the Council of Valkyries. Head to the beach located in the center of Helheim Tower and Njord’s Oarsmen. To reach the door, you will have to climb and shimmy across the ledge before climbing some more cliffs.

Go inside the door of Council of Valkyries and head to the arena inside. You will see some thrones sitting inside. Your treasure is located between the second and third seats located on the left side. 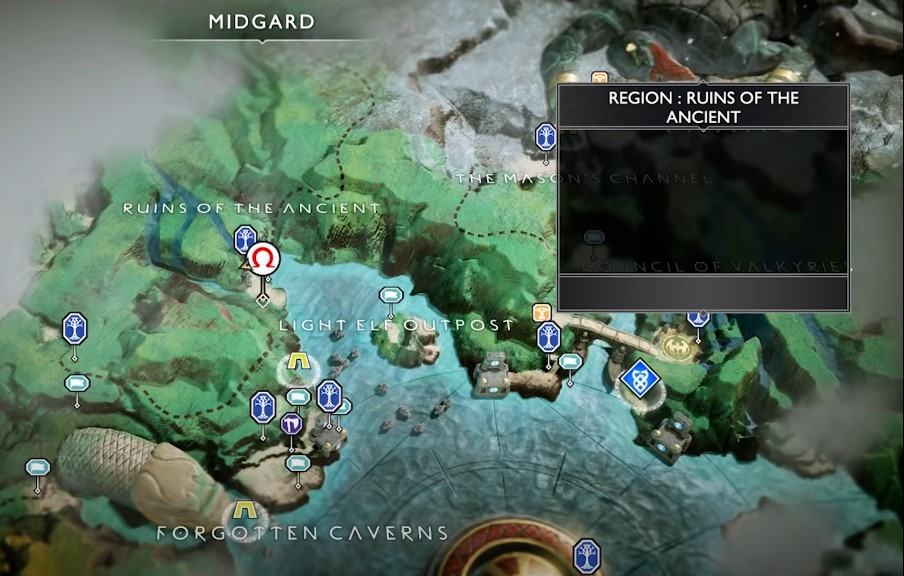 This treasure is collectible after the second water drop. Head to Ruins of Ancient and dock your boat on the northeast corner of Lake of Nine. From here you can access Ruins of the Ancient’s main area.

On the beach, look on the right side where a Soul Devourer is also roaming. You can choose between fighting it and ignoring it. The map is sitting on the same right side of the map.

How to Solve Historian Treasure Map

Once the map is collected and deciphered, the hint for the location of the treasure is shown. You must head to Fafnir’s Storeroom to collect this treasure.

For making the treasure hunt easy, collect it during Sindri’s ‘Fafnir’s Hoard’ favor. Clear the forest and head towards the sealed storeroom door on the south side. You will find the treasure buried right in front of this door.