How To Defeat Nidhogg In God Of War: Ragnarok 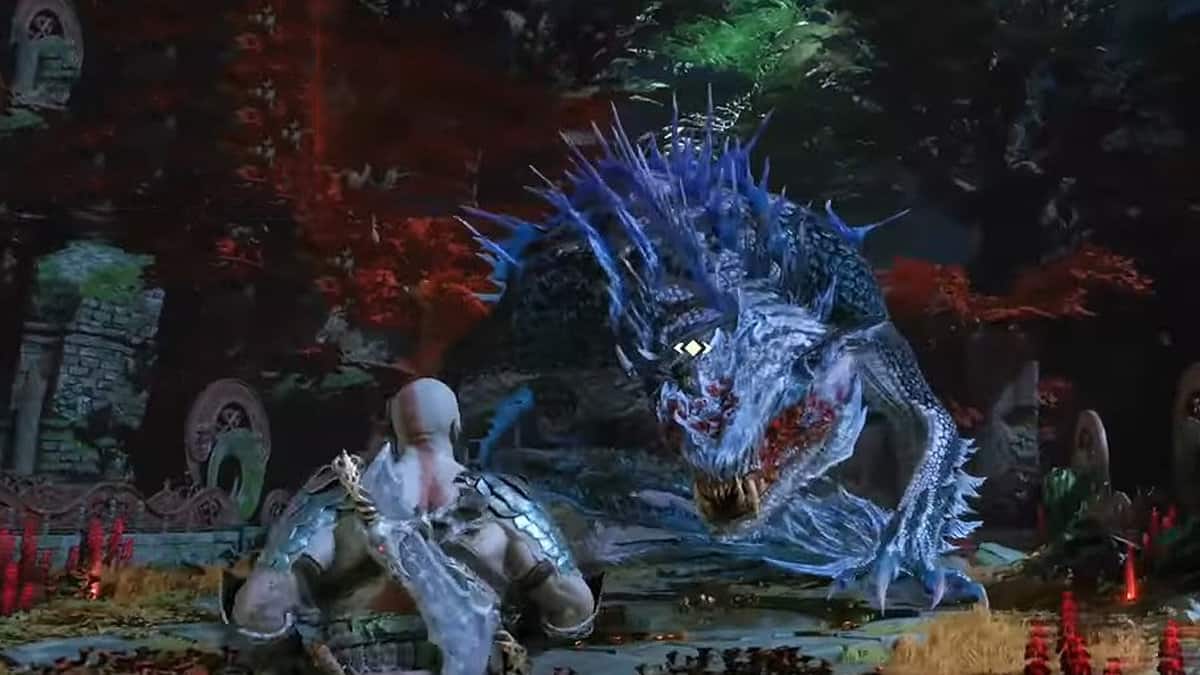 Nidhogg is one of the main story bosses of God of War: Ragnarok. She is an ancient dragon-like creature that protects the roots of the World Tree at Odin’s behest.

Unlike the mini-bosses such as the Huntress and Alva, Nidhogg is a grander boss fight in a more traditional God of War style. You can expect Nidhogg to fill your screen with her scaly wings and all sorts of attacks that can make short work of you unless you are prepared.

The following guide will help you to defeat Nidhogg in God of War: Ragnarok.

You will encounter Nidhogg during The Reckoning quest in the sixth chapter. This will be inside the Abandoned Village in Vanaheim, right next to Freya’s home.

Nidhogg will appear once you help Freya remove the Yggdrasil’s roots.

The battle with Nidhogg is a long and diverse one, as it consists of three phases where she gets a new set of attacks in every phase. It also specializes in all of the attacks – long, medium, and close range.

Lunging Bite
Nidhogg will raise her head in the sky and proceed to attack Kratos, biting him in the process. This attack will deal a moderate amount of damage but can be in turn parried via the yellow indicator to stagger the boss.

Claw Slam
Nidhogg will raise one of her claws in the air and proceed to slam it on top of Kratos to deal moderate damage and break his guard. This attack can be dodged as well as parried if timed right.

Bifrost Wave
Nidhogg will take a few seconds to charge one of her claws with magic and then proceed to release that magic toward Kratos in the form of pulsating waves.

The initial wavefront cannot be blocked and if hit, can inflict Bifrost upon Kratos. The best way to counter this would be to dodge this attack and wait for the remaining wavefront to dissipate.

Bifrost Explosion
Nidhogg will slam her tail with force upon the ground to charge it up with magic. She will then use the magic acquired to release a large shockwave that deals massive amounts of damage and also inflicts Bifrost upon impact.

The initial tail slam of this attack cannot be blocked, but as Nidhogg tries to continue the attack, Kratos can use the Shield Strike, pressing L1 twice to stagger Nidhogg and prevent the attack – in turn allowing more time to get a few hits off.

Bifrost Scatter
In this attack, Nidhogg will first charge her claws with magic before slamming the ground to release a few flames of Bifrost outward from the point of impact. These flames deal a lot of damage and also inflict Bifrost upon impact.

The slam at the initial point of the attack cannot be blocked, and the only way to avoid it is to roll out of the way and wait for the pulsating flames to disappear.

Triple Bite
This is a standard biting attack touched up with a little bit of a combo. Nidhogg will first try two normal bites, followed by an extended/lunging third bite. The first two bites can be blocked easily, while the third bite should be parried on time – it cannot be blocked.

Slash and Wave Combo
This attack is a combination of a new attack and two previous ones in a combo.

Nidhogg will first swipe one of her claws toward Kratos in a horizontal fashion so as to perform a slash attack. She will then proceed to follow this attack with a Claw Slam and a Bifrost Wave from the previous phase.

The initial claw swipe can be blocked, but you will have to dodge the other two attacks.

Swipe and Bite Combo
This attack is similar to the previous one. Nidhogg will first perform two Claw Slashes, followed by a third extended bite. The first two attacks can be blocked, but the third one has to be parried in order to stagger Nidhogg.

Bifrost Laser
This is a modified type of Bifrost wave attack in which Nidhogg emits a laser from its tail – first in a horizontal fashion and then in a vertical one. The first attack i.e. the horizontal laser can be blocked via guarding, but you have to move out of the way of the vertical one – dodging it.

Realm Tear Tail Stab
This is an unpredictable attack. Nidhogg will create a realm tear and push her tail through it. Her tail will then exit a randomly created tear on top of Kratos to deal damage.

This will occur in a chain of three successive hits, and you will have to time it and roll out of the way each time, as it cannot be blocked.

Bifrost Orb Barrage
In this attack, Nidhogg will emit three consecutive orbs from her tail that deal Bifrost to Kratos upon impact, also in turn breaking his guard. The best way to avoid this attack would be to move out of the way of the projectiles.

Debris Scatter
Nidhogg will create an opening in her gut and suck up all of the rocks and rubble nearby. She will then proceed to throw it all out toward Kratos from her mouth.

A lot of these rocks can hit Kratos, but they can be blocked by guarding against them.

Debris Orb
This attack follows the same pattern as the previous one, except this time Nidhogg, instead of throwing out whole rocks, will shape them into a form of an orb which deals much higher damage.

This attack can also not be blocked by Kratos, and the best way to avoid it would be to use the red ring indicator and roll out of the way.

How to beat Nidhogg

Although Nidhogg seems to be a large and visibly terrifying monster, topped off with an absolutely huge variety of attacks, it is still fairly easy to counter her provided that you understand all of her attacks.

You might notice that Nidhogg uses a lot of Bifrost attacks, but she is also weak to Burn – which makes our Blades of Chaos the perfect weapon.

The basic strategy is to wait for Nidhogg to attack first, counter if given the chance, and then use the staggering opportunity to land a few hits. If not staggered, you might notice that Nidhogg always lowers her head after an attack, which creates an opening for you to land a few headshots.

Although Nidhogg seems to have a fairly large health pool, it’s quite misleading because her health depletes very fast – especially if you use the Blades of Chaos.

Furthermore, after the first phase, Freya will help you in your fight against the beast. She will fire her blue Sigils at the Nidhogg. The blue areas marked on the beast by her Sigils indicate an area of vulnerability. If Kratos manages to land a hit there, the attack damage will be amplified.

Moreover, you can also take the time taken by Nidhogg to charge her tail during the Bifrost Explosion to attack her with the Shield Strike ability. This will stagger Nidhogg and allow you to land a few free hits.