How To Defeat Dreki In God Of War: Ragnarok 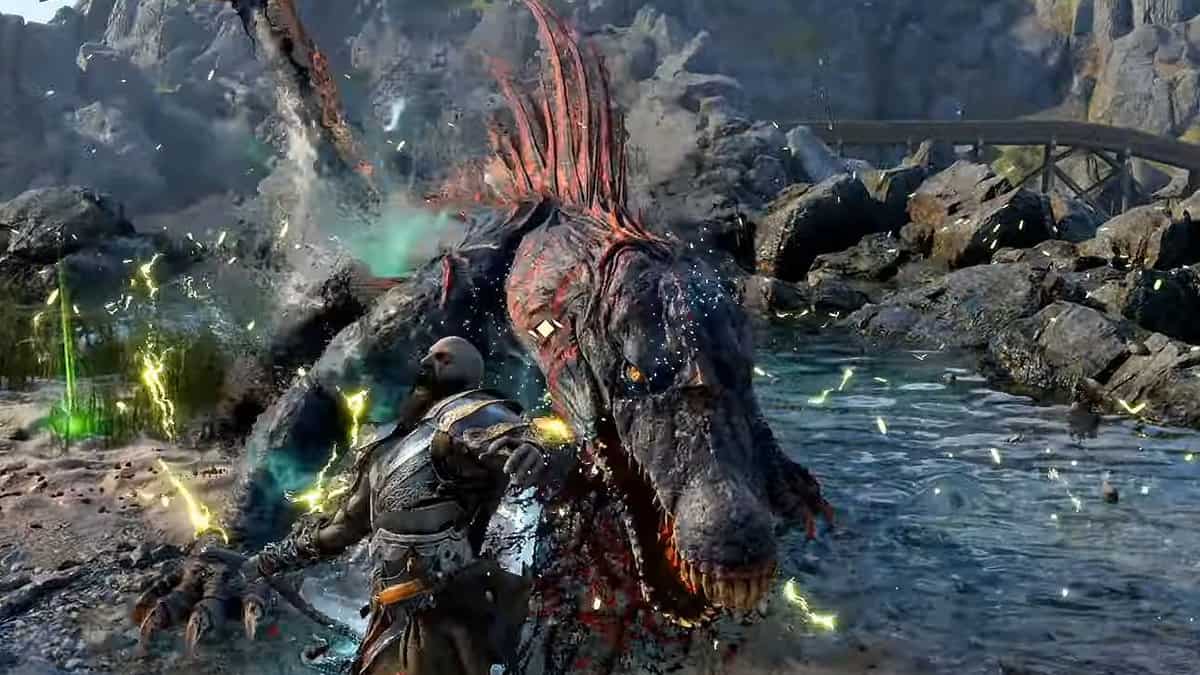 God of War: Ragnarok features a variety of terrifying bosses that put up amazing fights. You will come across many bosses while progressing through the main storyline, putting your skills to the test.

One of these bosses is the Dreki. This is a special – although not so tough – boss that you encounter twice in the main story.

In this guide, we will break down the fight against Dreki, and show you how to beat them in God of War: Ragnarok.

You will actually encounter Dreki at two different points in the main storyline. The second encounter will pit two Drekis against you.

Your first encounter with Dreki is during The Quest For Tyr – specifically around the swamp near the Forge (Svartalfheim).

Your second encounter with Dreki will be during the Creatures of Prophecy quest while returning to Frey’s Camp in Vanaheim. This time though, you will have to fight two Drekis at once.

Given below is a list of all the moves the Dreki can pull off in each of the two encounters you have against them.

This encounter has further two subparts – the normal and the electrified phase. There will be a slight attack variation in each of the two parts.

Tail Whip
The Dreki will prepare its tail by bringing it to a side for a large wipe at you. It will whip its tail around several times, dealing moderate damage upon a hit.

With the help of its distinct animation, you can easily see this attack coming, then counter by parrying it (if timed correctly).

The second bite, in particular, is a yellow ring attack, so it would be best to move out of the way or parry it.

Pouncing Bite
In this attack, Dreki roars and leaps at Kratos in an attempt to bite him. This attack is indicated by a yellow ring and deals a lot of damage upon impact, so it would be wise to move out of its way or parry it.

Bite and Pounce Combo
This is a special kind of attack that is made by a combination of the previous two attacks, the Twin Bite Combo and the Pouncing Bite.

The Dreki performs the former first, followed by the latter. This is a powerful attack that is hard to counter, as you have to either block the first bite or parry/evade the last two.

This is also indicated by a yellow ring, and if you fail to parry the attacks, it will allow the Dreki to make a further two bites that will damage Kratos even more.

Water Spit
This is a simple attack where Dreki spits a slow water projectile toward Kratos. It is easy to evade due to its slow speed, but can also be blocked with his shield

This is a modification of the previous attack. In this attack, instead of spitting one water projectile, Dreki first raises its mouth and then spits multiple of them toward Kratos.

Moreover, these projectiles in particular cannot be blocked, so it would be best to evade them by dodging them.

Electric Discharge
As Dreki charges up this attack, you can see the ground around it start to get electrified. A red ring indicator will appear during this attack as the Dreki spews out a shockwave at you.

React to the red ring and move out of the way, as the shockwave cannot be blocked. Upon hit, it will deal moderate damage and electrify Kratos.

Electrified Acid Spit
This is similar to the previous attack. This time, the Dreki spits out three electrified acid balls toward Kratos. These acid balls stick to the ground for some time and cover an AoE (Area of Effect).

Staying in this area would lead to a shock build-up and moderate damage, therefore, it is best to move out of the area as this attack cannot be blocked.

Electrified Pit Barrage
This attack is a modification of the Water Spit Barrage in the normal phase. This time, the Dreki will electrocute the water it spits so as to shock Kratos as well upon impact.

Just as before, you can counter this attack by moving out of the way.

In addition to facing two Drekis at once, you will also notice that they have gained a few new abilities.

Acid Spit
This attack is indicated by a red ring and deals moderate damage upon impact. In this attack, the Dreki will pull back its head and proceed to spit balls of acid toward Kratos.

This attack cannot be blocked as the acid burns Kratos. It would be best to move out of the way of this attack – including the pools of acid left on the ground if missed (which will disappear after some time).

Poison Breath
Dreki will break out a poisonous gas that deals moderate damage to Kratos if he comes into contact.

Take note that the toxic gas will remain in the area for a brief while. You only need to make sure not to enter it.

This attack can be blocked, but it would be best to move out of its way.

Triple Bite Combo
Dreki will first go for a Twin Bite Combo before finishing with a third, unblockable bite.

This attack is indicated by a blue ring, and to counter it, it would be best to block/evade the first two bites and use a Shield Strike against the third bite to stagger the Dreki.

Submerged Projectile Spit
This is a unique attack in which Dreki flees underwater and timely pokes its head out of it to shoot to spit at Kratos. This spit makes a long trajectory though, so it’s easy to evade, but you have to move out of the area as well because the spit leaves a pool of acid once it hits the ground.

Keeping in mind the attack pattern and counters to all of the attacks mentioned above, half of our job defeating the Dreki is already done. The encounters with Dreki are fairly easy fights as they do not have much of a large health pool.

There are just a few more things to keep in mind while fighting the Dreki.

The recommended level for the first encounter against the Dreki is Level 1 for all difficulties, while it’s Level 5 for the second encounter.

Moreover, you should use the Leviathan Axe more often against the Dreki. Their attack speed is already fairly average, and with the Leviathan Axe’s Frost Awaken debuff, they are slowed down further, giving you more opportunities to close in on the beast.

You can also use the same debuff and throw your axe toward the acid balls to interrupt Dreki. Doing this will build your stun meter faster.

Furthermore, you should use your Spartan Rage as a last resort – only when you’re health is minimal. This time will often come if you don’t manage to keep out of the Dreki’s lingering acid pools.

Using this mode will allow Kratos to land more powerful attacks, restoring HP back with each successful hit and getting back into the battle with sufficient HP.

As for the second encounter with the twin Dreki, the general strategy remains the same, except this time, it would be best to focus on one Dreki at a time, eliminate it, and then move on to the next one.