Future GTA 5 DLC to Bring CJ and Franklin Together? Are They Related? 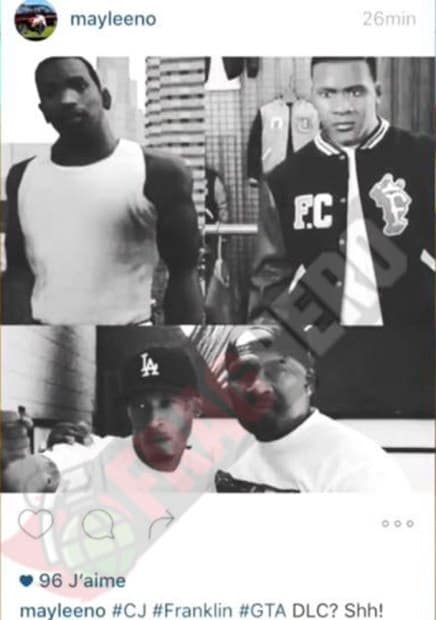 We have not heard of anything like this one before but since the rumor mill about GTA 5 DLC news keeps churning, there always is something new to talk about. Apparently, there could be a new downloadable content pack for the game featuring the good old Franklin accompanied by none other than CJ!

Of course this has not come from the officials, rather one of the voice actors who have worked on GTA 5. The guy’s name is Maylay a.k.a Mayleeno and he is known for being the voice behind Franklin.

What happened was that Maylay took to his Instagram account with a photo collage featuring CJ and Franklin together. Now why would he go through the trouble of bringing two characters together since Carl Johnson belongs to 12 year old Grand Theft Auto: San Andreas and Franklin Clinton is from the latest GTA 5.

The answer could be hidden in the caption that Maylay gave to the photo; it read “#CJ #Frankilin #GTA DLC? Shh!” leaving no doubt that he was actually teasing about an upcoming GTA 5 DLC.

However, this might just have been a fluke had Maylay not taken down the photo soon after that only to put it back up again with an edited caption. This time there was no mention of the downloadable content pack in it. Check out the photo below.

As soon as the photo went viral, people started speculating. Some are saying that since they are being shown standing together, they could be related. Maybe CJ is the father of Franklin. But wouldn’t that be disproportionate to the timeline?

Tell us what you would like to see in the next GTA 5 DLC.