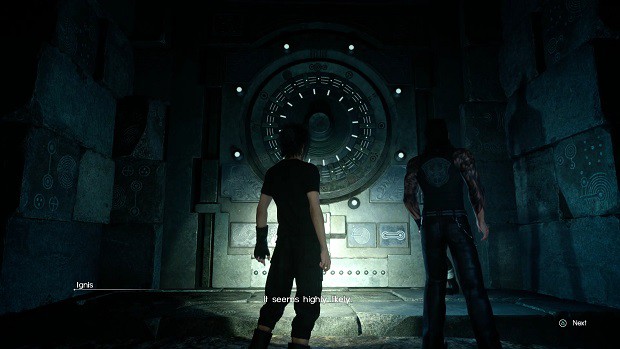 We have provided instructions in detail as though how to clear the dungeon including tips and tricks to defeat the dungeon boss as well as the loot that you can get in this dungeon in this Final Fantasy XV Keycatrich Trench Dungeon Guide.

As soon as you enter the Keycatrich Trench, you will find some Metal Scrap lying on the ground right in the first room. Collect it.

After this, follow the cable down in the corridor, it will head right and will take you to a generator. Turn on the generator. Once done, head left from the generator, there will be a corridor there, which will lead you back to the main path.

At the end of the path, there is an Electrolyte Condenser item that you need to collect. Collect it and head around the corner and down the next hallway to the right.

Keep on going and you will reach a door. Before you go through the door, you need to pick up the Carbon Bangle lying on the ground to the left.

Continue on forward, collect the Rusted Bit in the corner to the right and keep on advancing. Go straight past the locked door on the right.

When you reach, the end of the corridor there will be a large room. Here you will absorb the ice energy to the right and collect the Oracle Ascension coin in the far left corner of the room.

Once done, try opening the door to the right. You will find out that it is locked. Once you have reached this point, all the doors that you passed before in the corridor will be unlocked now.

Now for some backtracking. Head back in the corridor, look for the door in the first alcove to the left and go through it. Here you will find an Ether, pick it up and head ahead deeper into the cave.

Once you reach the end, you will arrive at a stair set. Go up the stairs and open the door. You have reached the opposite side of the room that was just in.

Opposite to this Rusted bit, there is a corridor. Go in it and continue until you reach a gate. Unlock this gate and crawl under the rocks to advance.

Here you will find a Bronze Bangle on the ground. Collect it and fight the Goblins that appear ahead suddenly.

Once done, advance forward. Head down in the corridor on the right side and collect the Green Choker on the ground. As soon as you collect it, be ready for ambushing Goblins.

Kill them and advance ahead under the rocks in the Alcove on the other side of the room. There is another Oracle Ascension Coin here on the ground. Same case as the last one, collect the loot and kill the ambushing Goblins.

Now, head in the opposite direction down the corridor. There will be small opening here and you will need to squeeze through it. Collect the elixir here and open the first door on the left.

Ignore the path on the right just yet. Inside the room, you will find more Goblins. Kill them all and turn on the generator. Head back and keep on going left. Keep on going straight to pick up the Elixir at the end of the hall. Head through the door to absorb the fire energy.

Going through the far left corner door will spawn some enemies that you will need to take care of first. Kill them, go through the door and pick up the Auto Crossbow. You have a new weapon now.

You will find some Hi-Elixir ahead in the hallway. Collect that and head to the previous path that you initially ignore. Head through the path and the door to the next room and get ready for the boss fight.

The boss that you face in Keycatrich Dungeon is the Arachne. Arachne has a huge health of 18,053 and is no easy boss to defeat. The best thing to use against it are lightning attacks. Make sure you have plenty of thunder spells when you go for this boss battle.

To deal maximum damage to the boss, try hitting it from the backside, here you will deal the most damage and kill it easily. Try to avoid the attacks as most of the attacks are deadly and they will make quick work of you if you do not avoid them.

Once you are done with the boss, head on through the door to find a Laser Sensor and a locked door. Unlock it, pick up the item and go back. Once back, crawl under the rubble to the north.

This is your way out. At the end, head into the Tomb of the Conqueror and collect the Axe of the Conqueror. Once collected, you have successfully completed your Keycatrich Dungeon.