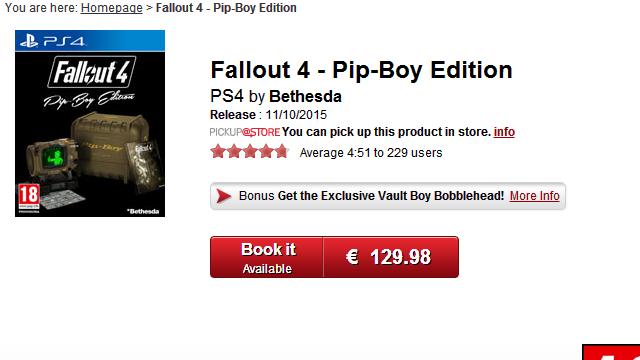 Fallout 4 Pip Boy Edition is probably the most demanded collector’s edition to date. Bethesda is having issues maintaining supply, and the developer has said that it won’t be making anymore. However, It looks like GameStop still has some stock left in its possession.

The popular Fallout 4 Pip Boy Edition is being sold over at GameStop Italy.

Like I mentioned, Bethesda has no plans to make more of Pip Boys, but considering the demand of it, Bethesda should surely reconsider.

Pete Hines from Bethesda recently said: “Final answer: sorry, this is as many as we can make.’ And we sold every single one of those that we could.”

Fallout 4 will release in November for PlayStation 4, Xbox One and PC. According to new details, the game could take over 400 hours to fully explore.

Lead Producer Jeff Gardiner said that he played the game for 400 hours, but is yet to do everything. Looks like we’ll be spending most of our Holidays in the post apocalyptic Boston.