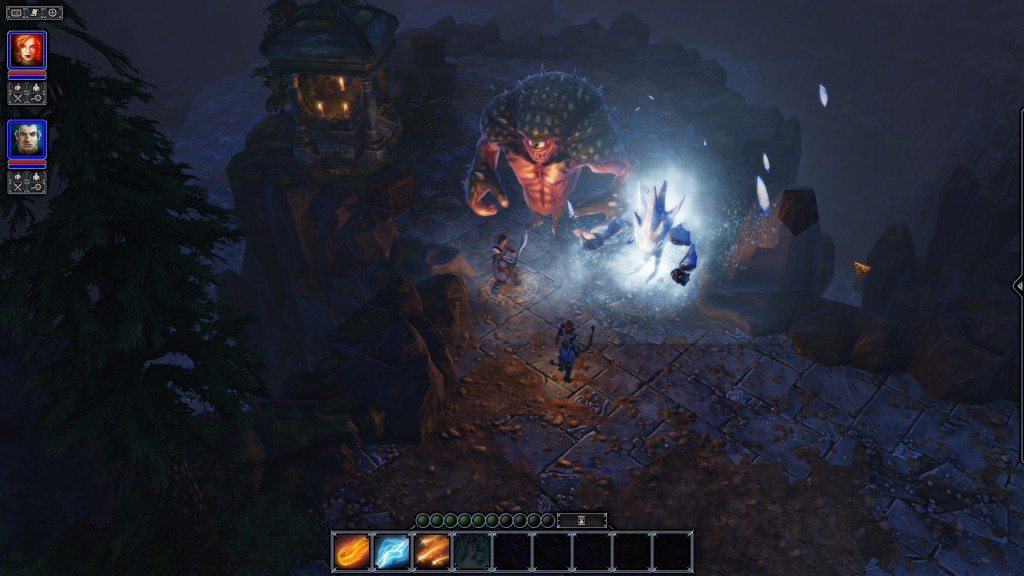 Although Divinity Original Sin is looking good so far, but it does have some issues, which can be associated with what I like to call the Launch Syndrome. The good news is that the developer is hard at work to fix these issues, and we already have received a few patches for the game.

So, if you are experiencing any problem, make sure that you have the latest version for the game.

If the official updates still aren’t proving useful, you can refer to our troubleshooting guide to find the possible fixes/workarounds of the concerned problems.

#1 Divinity Original Sin Won’t Start
If you have been unable to start a new game or you get disconnected as soon as you enter the campaign, the problem could be related to your connection.

To fix the issue, make sure that your game is not being blocked by an firewall or security tools you might have installed on your PC.

#2 Divinity Original Sin Won’t Get Past Startup Screen
There is a possibility that you might see a startup feedback splash after you launch the game and then nothing further will happen. In that case, you need to press enter to fix the problem.

There have been multiple updates since the release of the game and I believe that the issue has been resolved but still, if it hasn’t for you, pressing enter doesn’t hurt, right?

#3 Divinity Original Sin Crashes on Pressing New Game
Many 32-bit OS users are experiencing an issue where there game crashes instantly when they press start a new game.

The issue has been acknowledged by the developer and should have been fixed by now but if it’s not for you yet, you can try the workaround mentioned in this thread.

#4 Divinity Original Sin Save Crash Fix
Many users have reported that they are experiencing crashes especially when the game is being saved or when they are trying to load a saved game. Patch 1.0.95.0 patch for the game should have fixed the issue but if the problem still persists, you can try out the following workarounds:

Hopefully now, you will be able to save and load the game normally. And if it doesn’t work, you can try out the following workaround:

#5 Divinity Original Sin Crashes – d3dx9_43.dll Issue
If you are receiving this error on crash, first thing you should do is try running the directx installer that comes with the game.

If that doesn’t fix the issue, you can use the workarounds mentioned in this article to resolve the problem.

#6 Divinity Original Sin – The Game Requires Update/Installation Issue
This issue is also related to your antivirus or any other security tool you might have installed on your PC.

If the game keeps on asking you to update every time you try to start it, the problem is with your antivirus blocking the normal functioning of the game. You can add an exception for Divinity Original Sin to fix the issue.

#7 Divinity Original Sin Crash – WindowsFormApplication1 Error
Yet another issue that will arise due to conflict between your game and antivirus. As a test, first disable your antivirus for sometime and try starting the game.

If it runs fine, you need to add an exception for Divinity Original in your antivirus software so that you can use both the applications at the same time.

#8 Divinity Original Sin Character Cannot Join the Combat
It was a known bug to the developer when the game got released. Now, after multiple patches, the issue has been fixed and you should be able to do the combat just fine. Just make sure that your game is up to date.

#9 Divinity Original Sin Graphics Issue With Laptops
Nvidia Optimus can be a tricky tool to deal with especially with the latest drivers. Sometimes, it will run the game using Intel card instead of the dedicated memory even if it’s selected to do the opposite.

So if you are facing graphical issues with Divinity Original Sin and you are using a Laptop with two cards, try rolling back to an older stable driver version for your GPU.

#10 Divinity Original Sin – The Game Runs Only on Directx 9
The game engine doesn’t support DX 11 for the time being. Worry not though, DX 11 rendering is something that the developer some plans for. So stay tuned for further updates.

#11 Divinity Original Sin Black Screen Fix
First thing you need to make sure is that your GPU drivers are up to date because many black screen issues are drivers related.

If that’s not case, Try running the game directly as admin from \SteamApps\common\Divinity – Original Sin\Shipping\EoCApp.exe’ program file. And if you are also getting a .Net error, you need to re-install the .Net framework from Microsoft’s official website.

#12 Divinity Original Sin Multiplayer Connection Issue
If you are having trouble in connecting with your friend for multiplayer, then both you and your friend must make sure that both the connections are not being blocked by a firewall or an antivirus tool.

If that doesn’t help, you could also try VPN tools like Hamachi as users have reported it to be working fine. Not a permanent fix though, but a useful workaround until it gets fixed officially.

#13 Divinity Original Sin Digital Collector’s Edition Doesn’t Have Extra Items
Sometimes, it happens with Steam that the extra items that should be in your inventory after you activate the game don’t show up. It can also be the case with Divinity Original.

The best solution for the problem is to contact Steam support. The response time could be an issue but ultimately, they will give you what is yours.