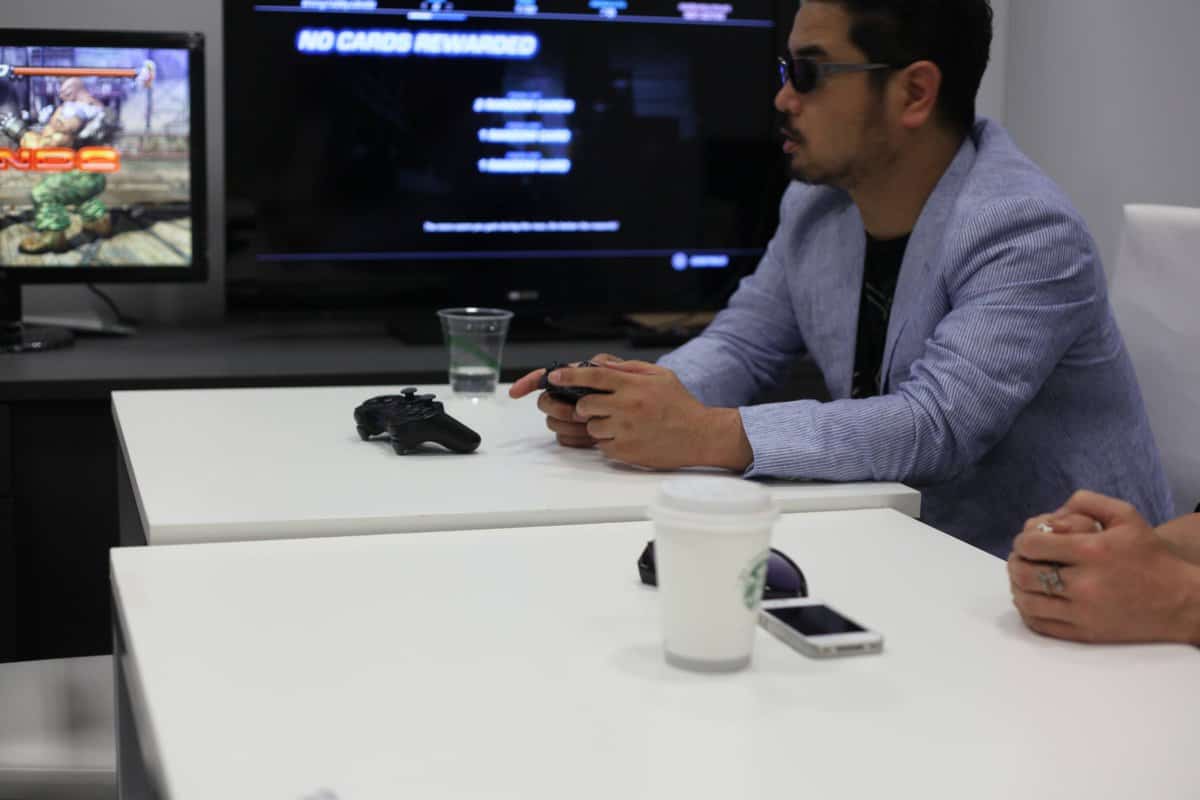 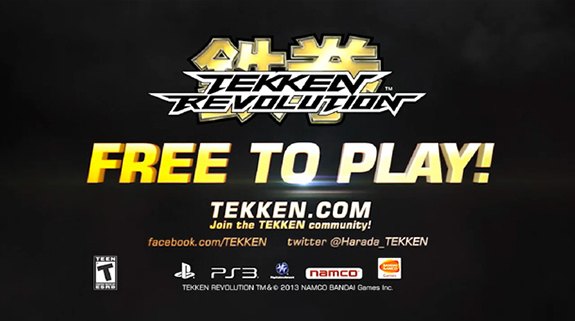 I had the privilege of meeting Katsuhiro Harada, the series director in charge of Namco Bandai’s free-to-play titles, and Michael Murray, the senior game designer of Tekken Revolution, also acting as translator.

Together they briefed us (me and two other journalists in the room) on the free-to-play system and new features of Tekken Revolution and Ridge Racer Driftopia.

Katsuhiro Harada can proudly call Tekken Revolution the first free-to-play fighting game, and it’s a fact Harada clearly adored as he spoke extensively on it. Harada is a man of style.

He wore dark sunglasses indoors, his hair spiked up like Paul Phoenix and wore a blazer with thin blue and white stripes that together look grey.

Speaking coolly, he explained that with Tekken Revolution, he wanted to recreate the experience of the arcade, when all you needed was a quarter to play. Free-to-play helped him accomplish this because you’re ready to start playing, but even without that initial token to get you there.

There’s several different coins in the upper right corner of the screen, such as the Versus coin which is used to play against other people.

Versus coins are doled out once for every thirty minutes, so even if you use it up, you’ll have another chance to play without actually purchasing anything. The coin on the left of the Versus coin is the Arcade coin, and the max for that is two every hour.

The balance of coins is based on the idea that people don’t play fighting games for “hours on end,” explained Harada, but for thirty minutes to an hour per day.

“Realistically,” he continued, “it’s hard to have a perfect win rate, but it is possible.”

Next, Harada discussed the game features. The new Character Enhancement mode is a first for the Tekken series. When you level up you get skill points you can assign to different attributes, which are Power, Endurance and Vigor.

Power deals with opponent damage; Endurance enhances your life gauge; Vigor deals with Critical Arcs, which have a chance of dealing “massive damage.”

“There’s actual physical change with how strong your character gets as a result of the hours put into the game,” said Harada.

The move list is “daunting” to people who’ve never played Tekken, with “several hundred per character,” Harada explained. “So what we’ve done is for each character we’ve created these special moves, “Critical Arcs.”

There’s five of these for each character. These are the character’s main offensive weapons, so, it’s kind of like a 2D fighter and these are their special attacks, so if you know those then you’ll be able to fight effectively.”

These special techniques feature Street Fighter-like effects, making them easily distinguishable from your regular move list. More to the point, they make the game more accessible. “Compared to past Tekkens it’s much easier for people who’ve never touched the game to get into it,” said Harada.

I asked him if he looked to any other fighting games when he developed Revolution, and he replied that “it’s not that we really look at other games as research or anything, it’s just everybody on the team loves fighting games and we’ve just grown up playing them so you kind of learn things that are enjoyable.

For example, most 3D fighters use some kind of a button for guarding. For Tekken, it’s back, which is something going back to Street Fighter. So, there is that there.”

Revolution features an all-new gift point system that gives you points toward unlocking new characters simply by logging into the game or by playing it often. Harada himself had played for an hour the previous day and unlocked Steve. “The order that the characters appear is random,” said Harada.

Closing out the discussion on Tekken Revolution, Harada explained his intent with the game. “This title was particularly really designed to lower the barrier of entry for new players but also to have enough new things to appeal to hardcore players as well,” he said.

He briefly touched on updates, teasing that future updates might bring new characters, new customization options or other features the player’s want.

When asked if it was scary releasing this type of game, Harada said it’s “different.”

“You’re not getting a certain amount of money coming in on packages. But rather than that, we have the 20th anniversary of Tekken, so we feel a lot of possibilities. These types of games lower the barrier for entry so there’s the chance of a lot more people actually checking out games.”

Harada, a self-proclaimed fan of Battlefield, cites his love of a series as the driving force behind committing to a package purchase even when there’s free-to-play out there:

“As a player I would play the free-to-play version and, so, OK, if they come out with Battlefield 4 as a package version, would I not buy it? I mostly likely would because I love the game.”

Stay tuned for Part #2 of the discussion, where I got to watch Harada play Ridge Racer Driftopia and, thankfully, not wreck the last car they had.