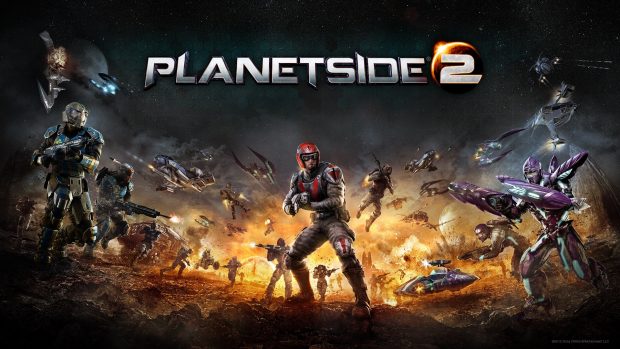 Gamers are likely familiar with the Planetside series after it finally got an actual sequel back in 2012. The franchise’s main marketing tool was thousands of players at a time fighting massive battles on foot, in vehicles, and in the air, and Planetside Arena, which they announced today, is no exception.

Planetside 2 dominated YouTube and other platforms for years after coming out, and while the game has mainly fallen once again into obscurity (though it was ported to the PS4 back in 2015), Daybreak Games is likely capitalizing on the renewed popularity of Battle Royale games to take another shot at a more scaled-down version that would be more in line with traditional battle royale titles.

The Planetside universe focuses on a group of colonists from Earth that travel through a wormhole to the planet Auraxis, only to be cut off and isolated from Earth when that wormhole collapses. The colonists, at odds over what to do to survive, form three factions: the Earth-loyal Terran Republic, the rebel New Conglomerate, and the alien technology-worshipping Vanu Sovereignty.

Players in Planetside Arena will be thrust into this conflict yet again in three different modes. There will be a conventional 100 player mode free-for-all, a 102-player three-man mode, and a two-side mode called Massive Clash that divides players into two 250-man teams. Each player will be able to choose between three classes, each of which gets their own abilities, a jetpack, and a way to summon vehicles.

However, even though it has Battle Royale game options, Daybreak is aiming to make Planetside Arena an online shooter where there are other mdoes as well, including conquest, capture the flag, team deathmatch, and more. So while you can play the game as a battle royale title, there’s a lot more you can do too.

Planetside Arena will be coming out on January 29 for the PC, with one 8 by 8 map to start.