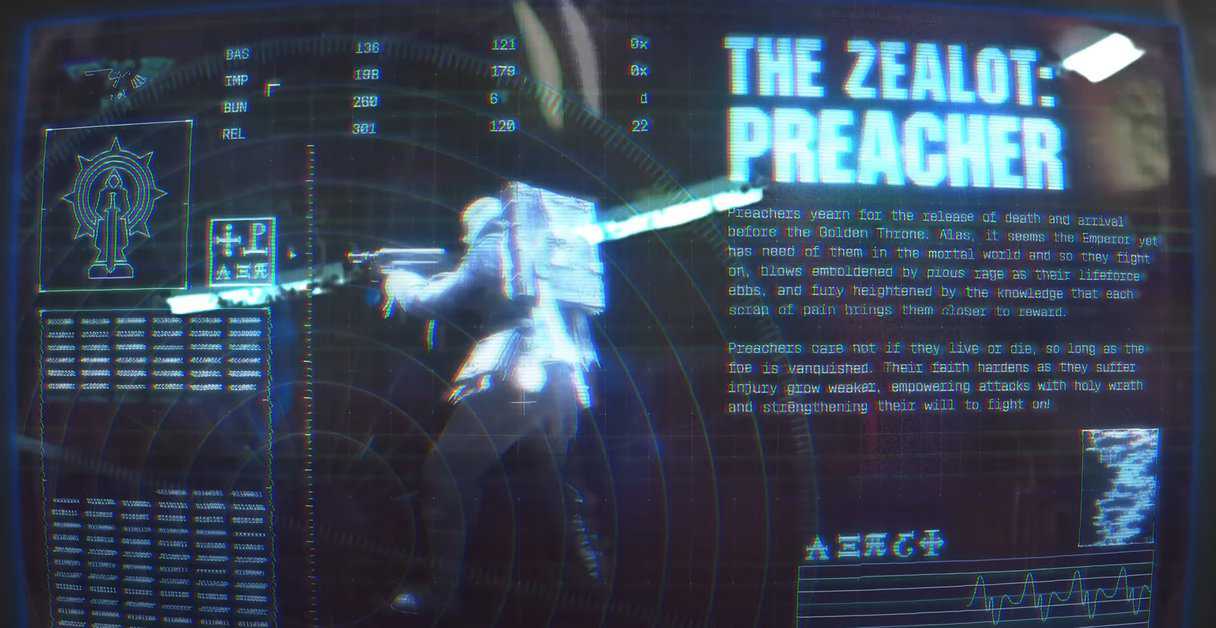 Zealot Preacher is a melee class in Warhammer 40K Darktide that will get into many close-quarter encounters and rush into enemies. It is a strong class, but still, you need to work on certain things, like toughness, to make a robust melee build that is viable in all scenarios.

We have prepared this guide to fill the spot the Zealot lacks in Warhammer 40000 Darktide and help you make the best leveling and endgame builds.

Zealot Preacher is a melee class with Chastice the Wicked core ability. This ability replenishes the toughness of your second melee attack by 25%.

Because of that, the second hit you do will always deal critical damage to the enemies. After that, the first Iconic ability for this class is Swift Exorcism.

This ability boost the melee attack speed by 10% so you can take out enemies more quickly. The second Iconic ability this class has is Martyrdom.

This ability increases your damage to enemies by 5 when your health drops by 15. You can stack it up three times to increase damage by 15.

The last Iconic ability for this class is Until Death. It is a fantastic ability as it can make you survive any attack for 5 seconds after every 90 seconds.

The Aura ability this class uses is Emperor’s Will. This ability will increase the toughness damage reduction of you and your allies by 7.

These are complete details about the abilities of the Zealot Preacher class; let’s talk about weapons and feats you need to make the best leveling and Endgame build.

The first and foremost thing you will need for the best Zealot builds is weapons. You can choose the following best weapons for leveling and endgame build in Warhammer 40000 Darktide.

Thunder Hammer is the best primary option, allowing you to smash the targets. It has high punching power that can damage any target it hits.

This weapon is a king of melee encounters that can easily headshot and take out dangerous enemies. After that, for the secondary weapon slot, we have Purgation Flamer.

It is a flame throw weapon that can target enemies at a close range and a small distance. This weapon is enough to rip off all the enemies in its range.

If you are in a situation where you have to tackle a lot of enemies, this is the best weapon for you to do it quickly. As far as feats are concerned, below, you will find the best feats for Zealot leveling build.

At level 5, the first feat we pick for the leveling build is Purify in Blood. It will replenish 100% more toughness on killing enemies in melee encounters.

After that, at level 10, we choose Bloodletting. With this feat, the chances of doing a melee critical hit increase by 10% if you hit bleeding enemies.

At level 15, Benediction will give a 15% toughness damage reduction to you and allies in the coherency. After that, when you get to level 20, Faith Restore All is the feat you should pick.

It will allow you to get back 25% of the health you lose in the last 5 seconds. It will increase your survivability. When you get to level 25, Rising Conviction is the feat to choose.

It will increase the damage you deal by 4% for 5 seconds. You can even stack it up five times to deal 20% extra damage with hits.

At last, when you get to level 30, Purge the Wicked is a feat you should pick. With this ability, the core ability of the Zealot class will have two charges.

The weapons for this build are the same as the leveling build, so without wasting time, let’s jump straight into the feats you should pick to make the OP endgame build.

The first feat we use for this build will give us 7.5% extra toughness when there is an enemy in the 8-meter radius around us.

It means when you are close to enemies, you will get more toughness for dealing extra damage. The second feat we choose for this class is Punishment.

While using this ability, you will deal 10% more damage if you hit three or more enemies. You can even stack it up three times to deal 30% more damage.

The third feat we choose for the best Zealot endgame build is Benediction. We choose it because it will synergize exceptionally well with The Emperor’s Will’s ability to increase the toughness damage reduction by 21%.

The level 20 feat we selected for this build is Thy Wrath be Swift. It will prevent you from getting stunned by the enemy’s melee attacks and increase your movement speed by 30% for 2 seconds.

So even if you are low in health, this ability helps you move quickly to a safe place and figure out a way to boost your health. The next feat we choose is Honour the Martyr.

This ability works well with the Martyrdom Iconic and increases its max stack by 6. You can now deal 30% more damage to destroy the enemy.

The Invocation of Death is the last feat for the endgame build. It will reduce the cooldown time of Zealot core ability Chastise the Wicked by 1.5 seconds after critical melee hits.

Together, these feats and weapons make a fantastic Zealot endgame build for you in Warhammer 40K Darktide.