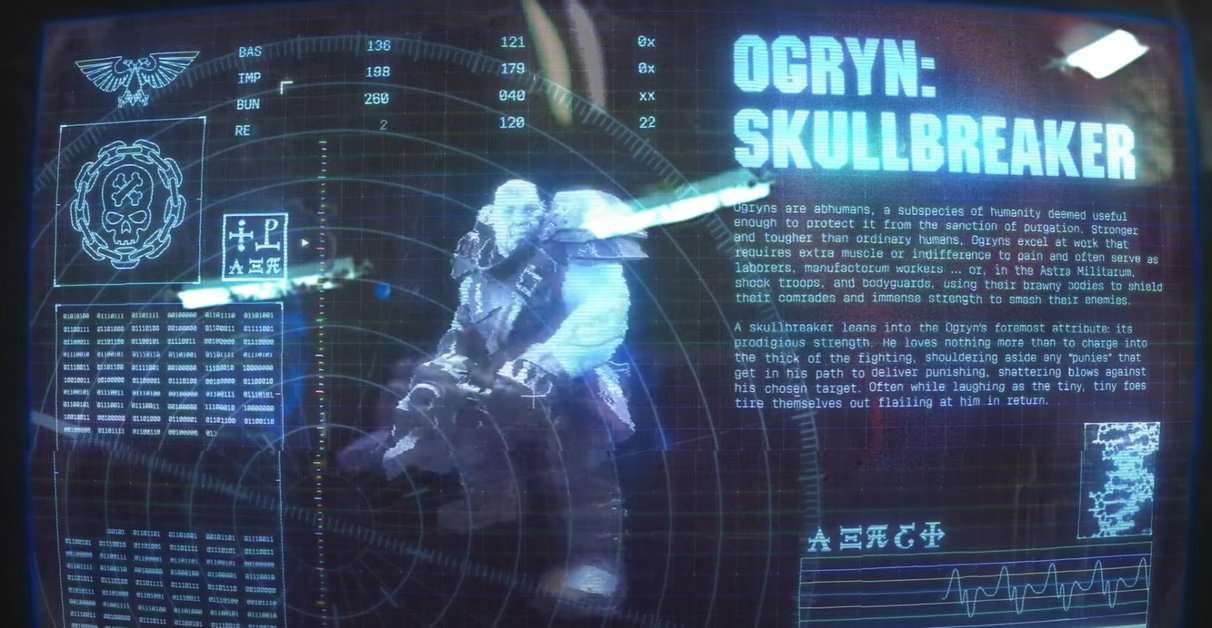 Ogryn or Skullbreaker is a tank class in Warhammer 40K Darktide that destroys its enemies at close ranges using heavy weapons. But when this class fights with enemies at a distance, it suffers severely. So to lower that suffering and make it excellent, in this guide, we will cover the best leveling and endgame builds for Ogryn in Darktide.

The Ogryn: Skullbreaker in Warhammer 40,000 has a core ability called Bull Rush. It is a pushing-back enemies attack that will boost your attack and movement speed by 25% for 5 seconds.

After that, the first iconic ability Ogryn has is Thick Skin. It will reduce the toughness and health damage by 20%. The second iconic ability, Excessive force, will increase the staggering chances by 25%.

Loyal Protector is the third iconic ability of this class that protects you from getting interrupted while assisting or healing allies.

At last, the aura ability of Ogryn in Warhammer 40,000 Darktide is Intimidating Presence, which will increase the heavy melee damage done by you and your team.

To start the Skullbreaker leveling build in Warhammer 40K Darktide, you first need to pick weapons and Shield. Below you will find the best primary and secondary weapons for this build.

The combo abilities of this pair also allow you to push enemies away. The Shield also allows you to absorb much damage with a defensive stance.

For a secondary weapon, we have picked up the Mk II Ripper. You can also go with Mk 5 or some other gun, but we choose it because of the extra ammo it provides you.

Moreover, its secondary fire is Fully Automatic, which allows you to hit targets continuously at a distance. After that, the feats that you should pick for the best build are below.

The first feat you should pick for leveling build is Smash’ Em Good. That will help you restore 20% toughness when your enemy hits you in a close counter.

After that, at level 10, we choose the Heavyweight ability for a 50% reduction in melee and normal damage.

Once you get to level 15, Bull Fighter is the best feat, as it will boost the cooldown time of Bull Rush, the core ability of Ogryn.

At levels 20 and 25, the two feats we choose are the same that we will use in the Endgame build. Both these abilities will help boost the damage resistance and melee damage you do to your enemies.

At last, we choose the Knife Through Butter feat, which allows a fully charged attack to have unlimited cleave.

The Primary and Secondary weapons and their role are the same as the Leveling build. The feats are slightly different for the Ogryn: Skullbreaker Endgame build, so let’s discuss them without wasting time.

The first feat we choose for our best Ogryn endgame build is Lynchpin. It will restore the toughness of you and your allies by 100%. So it will serve the purpose of helping Ogryn in a ranged battle.

The Blood and Thunder at level 10 will help you stack bleed for dealing additional damage. To further boost the damage output, we use Towering Presence at level 15 to increase the coherence radius by 50%.

The Bloodthirst feat will help to boost the damage resistance from bleeding enemies in close range by 10%. It means the enemies hit by Blood and Thunder will now deal less damage to you.

Raging bull help to boost the melee damage you do to enemies by 5% and makes you more dangerous. At last, the Bull Gore will increase the bleed stack on enemies by 2. It will support the Blood and Thunder feat to increase the damage output