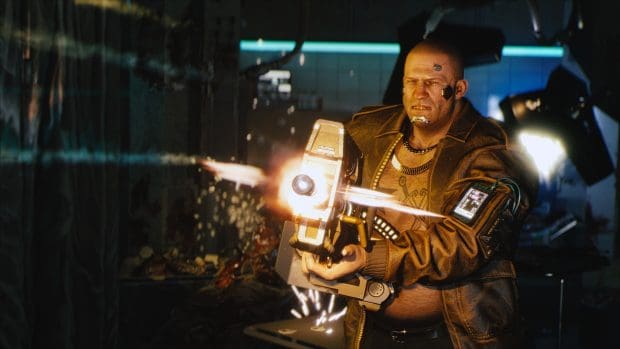 Throwing this out in the open, guns are legal in the Night City, everyone owns a gun and not just simple ones, the most unique and devastating weapons are totally common in Cyberpunk 2077. So if you thought that you would be the only one owning the city, well then you just might want to rethink. In episode 9 of Cyberpunk 2077 frame by frame trailer break down, the devs have turned towards Cyberpunk 2077 Gun Laws.

Apparently based on the gun laws everyone can own a gun, so rest assured that it is going to be a very hostile environment, in the Night City.

Owning a gun in the is one of the commonalities in the Night City, in fact, most of the people wear bulletproof clothing on a normal basis. Of course, if you lived in a city where everyone had a gun, it would become necessary for you to not only own a gun but also wear bulletproof clothing. You never know, you just might end as a collateral damage on someone else’s dispute no?

Gun laws are lax in Night City — anyone can own a gun. And thanks to frequent riots and the daily threat of violence, just about everyone does. Open carry of firearms is commonplace and many even wear bulletproof clothing as they go about their lives — just in case. No one bats an eye at a pistol here or a rifle there. To stay alive, you need to look out for yourself… Even if that sometimes means turning a blind eye to the constant violence happening all around.

Having said that do you remember the mouthless cyborg in the game trailer? Well turns out that there was nothing wrong with her or anything of that sort, rather its the other way around. Seems to be that trendy cyberware is a form of fashion in the Night City, so you can expect to see almost everyone having some kind of cyberware, or things like that.

When it comes to fashion, you can be sure that Cyberpunk 2077 has an idiosyncratic approach to retro-futurism.

Be that as it may, what are your thoughts on these Cyberpunk 2077 Gun Laws? Let us know in the comments below.