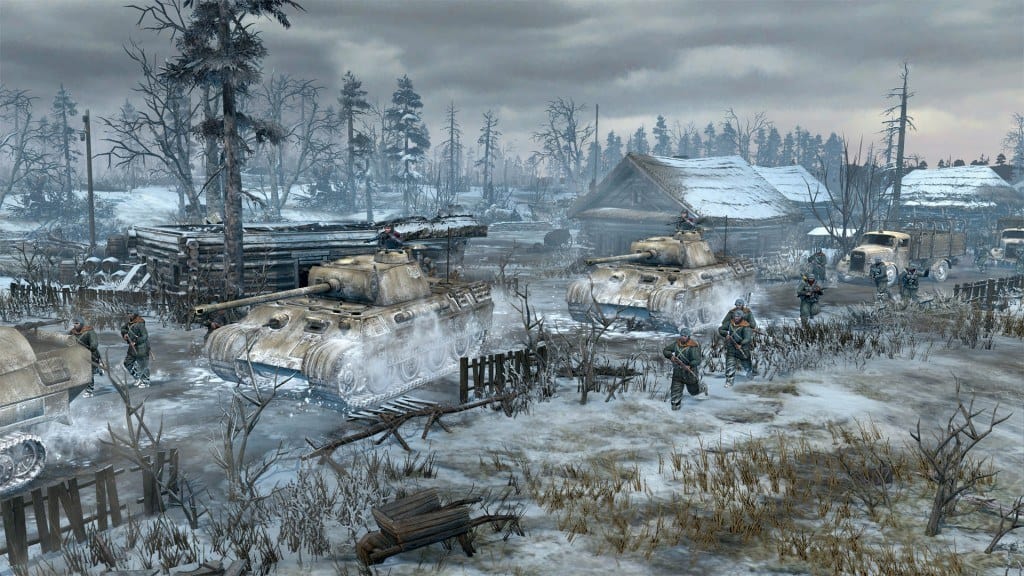 In the following guide for Company Of Heroes 2, we will be taking a look at the units for the German faction in the game. The Germans have some of the best armor units in the game. However, their units are also generally more expensive to produce.

For more help on Company of Heroes 2, read our Soviet Units Guide.

Here they are, starting from the very basic, tier zero Pioneers.

A four-man squad, Pioneers are the German’s basic builder units. They are pretty cheap and can be used in combat to provide supporting fire. They are rather weak in battle however, unless you upgrade them with Flamethrowers.

They can clear garrisoned buildings using the aforementioned upgrade as well and can repair buildings, vehicles and clear obstacles such as mines and barbed wires if given the necessary upgrades.

The four man Grenadier squad forms the backbone of the German frontline. They are more effective than other units of the same level at long range but lose out a bit in firepower to the Soviets as the distance is closed.

They’re also effective at taking out or crippling enemy armor with their Panzerfaust ability that damages tanks and destroys their engine. They can be upgraded to be even more effective against infantry.

This three man squad is like a glass cannon. They are capable of decimating multiple enemy infantry squads, but need help from other units as they require time to set up.

They have a very long range and wide firing arc, additionally they are very good at suppressing enemy positions, making them unable to act. They do next to no damage to armored targets, and take time to pack up before repositioning. They can also be garrisoned inside buildings, making them excellent for holding points.

One thing to note is that if a team is slain on the battlefield, they oftentimes leave the gun itself behind. You can take a regular squad and capture the MG42 to create an impromptu HMG team.

A super-long range three man squad, the GrW 34 is used to eliminate stationary enemy positions such as MG42 emplacements due to their inaccuracy and inability to hit anything mobile.

They can also be used to suppress enemies and provide support to allies due to their Mortar Barrage and Smoke Barrage abilities. They can also be set to automatically fire in response to enemy artillery or to hold fire.

Mortar teams must have a minimum of two soldiers operating it. If they lose two of their men, the remaining soldier flees the battle. The mortar they leave behind can usually be captured by another squad.

The only one-man squad on the side of the Germans, the Sniper is used for surgical strikes at sensitive targets. He can effectively decimate infantry, even behind cover, since it only takes one shot to take down a soldier.

As long as he has line of sight and is in range he can kill it. He can also become stealthed when not firing and in cover, becoming undetectable by all but the closest enemies. He is quite fragile though, and should only be brought to bear when trying to deal with an annoying gun emplacement or entrenched opponents.

PanzerGrenadiers are kind of the elite infantry of the Germans. This four-man squad is very versatile, able to deal with most any situation and capable of hold out for a significant amount of time under fire.

Their upgrades make them very effective at anti-armor combat at the cost of becoming slightly more vulnerable to other infantry.

A useful light vehicle, the Halftrack is effective against infantry due to its natural resistance to small arms fire and mounted machine gun. It is primarily a support vehicle due to its transportation and reinforcement capabilities.

If there is a squad near the halftrack that has lost some of its soldiers, they can reinforce directly from the halftrack instead of having to go all the way back to a HQ. It can be upgraded to become even deadlier versus infantry at the cost of losing its garrison capabilities.

The scout car is fast and mobile unit adept at scouting and providing heavy machine gun fire to mow down enemy infantry. It is lightly armored, so it can’t stand up to anti-armor fire.

However, it can be upgraded to deal more damage to other armored units at the expense of its own effectiveness against infantry.

Consisting of a three man squad, this anti-tank gun does as its name suggests; kill tanks. It is slightly inaccurate, but deals considerable amounts of damage to enemy armor, even from the front.

It’s also resistant to tank main gun fire, so it can sometimes win straight up slugfests if the tank doesn’t have a machinegun and doesn’t move around behind the Pak. The Pak will be disbanded if reduced down to a single man but, like the mortar, can be captured. The crew of the Pak is always in need of protection and support.

The standard battle tank for the German side, the StuG is pretty durable, and usually wins out in a straight up fight with its opponents of a similar caliber due to its powerful main gun.

However, it is slow and vulnerable to flanking, and until you upgrade it, it is weak to anti-armor attacks from infantry. It can also stun the crew of an opposing tank upon reaching veterancy.

The Flakpanzer is a lightly armored tank that fires hundreds of flak rounds a minute. This makes it devastating against all kinds of infantry and light vehicles.

It is able to move very fast as a result of its low armor value, but is fragile to armor piercing rounds. It cannot hold its own against heavily armored targets as its gun proves ineffective.

The Panzer is another example of the German’s standard armored cavalry.

Well armored and with a powerful gun, the Panzer can hold its own against any opposing armor of the same caliber, and is also effective against infantry due to its built in machine gun, and can be upgraded to be even better.

The Brummbar is a powerful anti-infantry tank due to the fact that it’s main gun fires a highly explosive shell that detonates over a large are, making it possible to decimate a whole squad with a single, well-placed shot.

While it can take a lot of damage due to its thick armor, it lacks the firepower to fight other tanks, so it requires support. It’s also slow, has a low fire-rate and slightly inaccurate.

The Panther is one of the more powerful of all the units in the game. It’s powerful armor can deflect numerous shells and it’s speed relative to its size means that it can usually out maneuver, out gun, and out-tank most other vehicles of the same class.

It’s also capable of dealing with infantry, as it comes with a machine gun and can be upgraded for another one.

While fragile to anti-armor fire, the Panzerwerfer is capable of laying down a significant amount of destruction in a concentrated area. Also armed with a machine gun, this vehicle is best used away from the front lines, when assaulting a heavily defended point.

The rockets can be inaccurate at longer ranges, but still cause enough damage to soften up targets.

The Artillery Officer isn’t really supposed to be on the frontlines, but just behind them. He provides accuracy bonuses to nearby infantry units and can coordinate the attacks of nearby artillery with his abilities.

Worst comes to worst, this squad of four can usually hold its own against most enemy infantry, as long as it’s in close quarters.

This Halftrack variant has a mortar team riding in the back. This is useful as it provides protection and mobility to the team as well as eliminating the necessity of setting up the equipment.

The mortar halftrack can also provide support with smoke bombs and incendiary bombs, to give cover to allies and burn enemy infantry respectively.

This is essentially the same machine as a regular old Panzer tank. It has the exact same stats, strengths and weaknesses. The only difference is that it has an increased cost and that it provides an aura that boosts the defensive stats of all units in the vicinity.

The most powerful anti-tank weapon available to the Germans, the Elefant is capable of punching through the armor of any vehicle that coming in sight. It’s incredible frontal armor means that it can also take its opponents shots and laugh at them while they scratch the paint job.

This does not mean however, that it can win the battle single-handedly. It’s one of the slowest units in the game, and long reload time. Until you upgrade it, it is also very vulnerable to getting flanked by infantry with anti-armor capabilities.

It can fire further than it can see, though this can be improved through its abilities.

The pinnacle of German tank engineering, the Tiger does it all, and does it better than anybody else. It’s faster than you would expect of something of that size, and its massive main gun can punch through heavy armor like paper.

It’s armor only loses out to the Elefant in the front. The shots come fast and accurate, and with its veterancy abilities, it becomes even more mobile.

The Howitzer is one of the longest ranged units in the game, capable of firing off massively destructive shells into the battlefield even from your base. It is notoriously inaccurate and slow firing, though a direct hit can usually ensure the destruction of several high value targets.

It is immobile and has a squad of three operating it. It can be set to target any enemy artillery units that fire within its range, or you can set its targets manually.

Similar to the Howitzer, this gun is immobile but has a very long range. Excellent for defending against armored advances, it’s gun can punch through the armor of any tank to deal heavy damage.

It is quite accurate as well. However it must be defended from artillery and infantry.

The Ostruppen is a squad consisting of six soldiers. They are poorly armed and so are mainly just cannon fodder. However, they are mildly useful for taking down enemy armor using the Panzerfaust ability.

A weak, easily destroyed truck, the Opel lacks any kind of offensive or defensive capabilities. It’s only use is to generate additional Munitions and Fuel for the German war machine when locked into a sector.