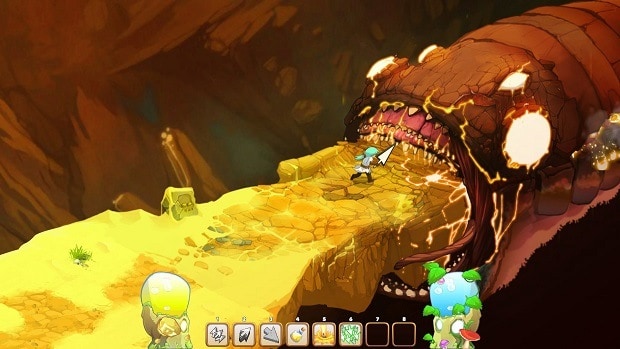 Our Clicker Heroes 2 Guide will help you in starting the game properly by explaining the basic mechanics of the game. It will also help you understand the world of the game, different currencies, attributes, and clickables. It also tells you how to efficiently manage your equipment and stats. You will also find detailed information on the leveling system and the Automater below:

Our Clicker Heroes 2 Guide details everything that you need to know about starting and playing Click Heroes 2.

The first title in the franchise was a solid game but the second one has taken a new direction with the game so even if you have played the original game, you are in for a surprise when you start Clicker Heroes 2.

Gold is the primary currency on Clicker Heroes 2 and it will use for all major purchases on your journey. You will use gold to purchase different items such as gear levels, which help in improving their different stats. Rubies, on the other hand, is the premium currency from the first game and is now acting as the premium game of Clicker Heroes 2 as well. You will buy a permanent or temporary world long boosts with it.

There are three main attributes that you need to keep an eye on in the game. These are energy, mana, and haste. Energy is consumed by any skill that you perform in the game. It replenishes automatically and the rate depends on your gear and level. Energy towers can also replenish your energy. Mana is mostly used to replenish energy and reloading. Mana towers can restore mana, as its automatic renewal speed is very slow.

Haste is Clicker Heroes 2 variant of agility. It reflects how much faster the cooldown timers will be for the character and the speed of the auto attack. It also affects the automater cooldowns by reducing them as it increases in value for that character. The game also features a number of different clickables that will give you different items when opened.

These clickables are a great source of currency, energy, and mana. Gold piles give you a varying amount of gold. Small Gold Pile and Large Gold Pile will give you gold while Orange Bird gives a large amount of gold as well as rubies. Keep your eyes open for them. Energy Tower grants energy refill while Mana Tower will replenish your mana to full.

The world of Clicker Heroes is divided into different levels and each level is different from the other one. However, the game follows a very simple layout in which after a certain number of worlds, you will encounter a similar situation, which you have already seen before. We will explain it further below.

Each world of the game is assigned a number like 1, 2, 3, and so on. You progress normally from 1 to 2 and then so on. Each number of the world shows a specific level type, which will be the same for each recurring number in a certain order.

Worlds with non-multiples of 5 numbers assigned to them are normal worlds. They will feature normal heroes and clickables. They do not have a time limit and each level ends with a boss fight. Sometimes you will also find treasure chests in these levels.

Every fifth world in the game is a timed world and you must complete the world within the time assigned. If you fail to do so, the zone will be reset. Other than the time, these worlds as same as normal worlds of the game.

Every twenty-fifth world in the game is a Raid Boss level. These levels do not have any clickables and they are also timed however they differ in the sense that you earn gold based on the damage done to the final boss. The level cannot be cleared until you have finally beaten the boss. These are relatively difficult worlds considering that you have to kill a raid boss within a time limit.

Level 99 is the world in which you encounter the final raid boss. Killing this raid boss allows you to access the special world 100 after it. Level 100 is the last level of the first worlds. Here you will be required to fight a world boss which when defeated, gives you access to the introduction to ascension.

The level system of these worlds is actually very easy to understand and gives a decent amount of challenge to players of all skill levels.

Clicker Heroes 2 features much more detailed character leveling system than the first game. It features different routes and paths which can be opted for your character allowing you to build a more specific and oriented character.

This allows you to choose any type of build and then further specialize the characters based on different abilities and skill routes present in the game. Your equipment also plays a vital role while choosing a leveling path so you must always go with skills and abilities that work best with the gear that you have currently for your character.

The first thing is the Skills. You can add and drop any skills that you have unlocked in your game. Most of the skills come with an automater version, which can be equipped here so you must first buy the original skill, and then their automater version to make them work here.

The next thing is the Stones. These are timers for your automater, which allow you to control the timers on your Automater. Some of these allow increasing the timers while some of them can decrease the timers. They help you in specifying the time intervals between skills by adjusting their cooldowns. You can unlock them from the leveling tree.

AutoOrder allows you to choose skills, abilities and their cooldown times by using stones. You will find all the available skills and abilities here so that you can choose from them. This is where you will set up the Automater.

When everything is set, you can turn it on which is denoted by the green button. It will keep running until you run out of energy. You can turn it off and on at your will and it is a great feature added to the game.

Throughout the game, you will be required to manage your equipment and stats. You can add stats to your current equipment manually to automatically as well. If you are not sure about where to add stats, you can always go for Haste as it decreases cooldown times; increases attack speed and balances out the automater.

If you plan to assign stats randomly then we recommend that you always check before confirming and do not just press confirm without looking. You can also add stats to your current weapon. When you add stats to your weapon, it will affect its damage output. Depending on what sort of stat you are adding, it might increase or decrease.

While changing gear, the stats shown in the red when you hover your mouse over them are the stats, which you will lose, and green ones are the ones that will be increased. Always check these stats before switching to new gear. The game features a wide variety of gear and equipment so you can pick any, which favors your game.

This concludes our Clicker Heroes 2 Guide. If you want to add anything to this guide, feel free to use the comments section below!