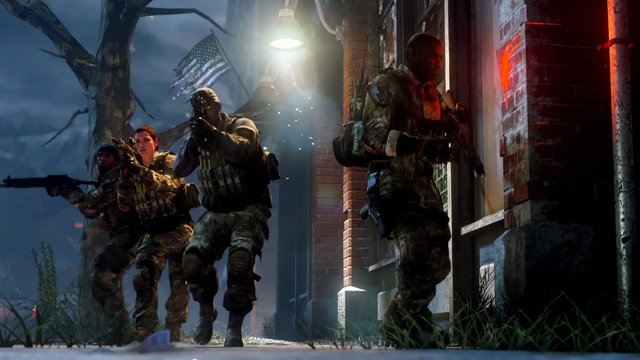 Call of Duty: Ghosts features an all-new game mode by the name of Extinction. Extinction can be considered as a spin-off of popular zombie survival mode from Call of Duty titles developed by Treyarch.

The Extinction Mode requires you to destroy 14 alien hives followed by activating a nuke and returning to escape zone. It can be played solo as well as with a full party of four players. You can have another player join-in via split-screen when playing on a single console.

In this guide, I will be talking about various tips and strategies that you could use while playing solo or with a full party.

Contrary to the popular belief, you don’t have to be at a maximum level to beat the Extinction Mode in solo. Sure, it is hell lot of a difficult task but certainly not impossible. All you need to do is practice a lot and figure out which abilities and classes work well for you.

We will certainly recommend you to level up to 22 so that you unlock Sentry Gun, which serves as another player. Besides, you need to avoid useless reloads and abilities. When planning on finishing the Extinction solo, I would recommend you to use the following Loadout:

Tank allows you to regenerate your health at a faster rate and receive less damage from Scorpions. You can have any pistol you want, but I would definitely go for M9A1.

When you are playing Solo, it is good to have Team Booster as it allows you to repair the Drill at a faster rate. And as for Crowd Control, it serves you as armor when you switch to your primary weapon.

Which Upgrades To Unlock With Skill Points
Skill Points are earned in the game depending upon your overall performance. An easy way of earning Skill Points is by completing challenges that appear before each hive. These challenges are pretty straightforward and get you plenty of Skill Points.

I have recommended an ideal upgrade tree which will serve you the best. However, I will not recommend you to stick with it if something else works for you:

Prior to starting the game, you need to coordinate with your team so as to decide which role to take. Every player in the team can also go for the same class but it is always better to have each class present at the same time.

Engineer
It is an Engineer’s responsibility to repair the Drill and set Traps in the surroundings. Traps set by Engineers last longer and they do not take damage while repairing the Drill.

Ammo
The primary focus of this role is to provide as much ammo as possible. In addition to this, upgrading ammo should be the first priority. You cannot expect to survive without ammo; so it is of significant importance.

Armor
The significance of Armor cannot be neglected. Armor allows your teammates to absorb damage and stay alive for longer durations of time. It is not easy to fulfill this role but I would definitely recommend someone to fill in this role and have constant supply of Armor on the go.

The Lodge
Just as the game starts, you need to complete at least two challenges. After entering the main area, you will be provided with different hives that you will have to destroy. I would recommend you destroy these hives in the A, B, C, D, E, order.

Since the difficulty of these hives increase over the course of time, I would recommend you to complete the Parking Lot at the very end since there will be Electric Traps to help you out.

You will often come across challenges like , ‘Get fifteen kills with shotgun before destroying the hives’. So it is better to purchase a gun after placing the Drill.

I would recommend you to buy AK-12 which is located at the very beginning of the map.

Barrier Hive
By the time you reach the first Barrier Hive, it is good to have at least two challenges completed and have Medic +2. Running around with a shotgun is definitely a bummer as you will not be able to strike scorpions at longer ranges.

The Scorpions at this stage inflict a lot damage, and it is good to take care of them first.

The Fire Trap located nearby is good as nothing. Instead of investing in Fire Trap, try considering having a Crowd Control and switching to your primary weapon, which will provide you with a weak armor to keep your back covered.

You should not worry about spending money at this point as clearing out the Barrier Hive will get you some additional money.

Scorpions have specific locations from which they attack. These locations are the neon sign, cliff and rooftops. Shoot them at sight but do not forget about the Scouts on the ground level.

Town
After successfully destroying the first Barrier Hive, you can grab the money and move into the Town. Seekers and Hunters will be waiting for your arrival so make sure you grab a LMG by ascending the ladder. This LMG has a good rate of fire and ammo clip, and you should be using it since the very end of the game and only costs you $3,000.

Once you have grabbed the gun, take the Drill and start clearing out the hives in A, B, C, D order. As I have afore mentioned, hives tend to get difficult with the passage of time so you need to do the hardest one near the Traps.

When you are drilling the Hive-C, make sure to activate all the Traps. As for the Hive-D, I would not recommend using the Sentry Gun but activating the Fire Trap is a must. Furthermore, try calling in the chopper for some extra support.

Second Barrier Hive
Knowing the pattern of Scorpions will work to your advantage while clearing out the second Barrier Hive. Once the chopper arrives, activate all the four traps in the area which will inflict heavy damage to Hunters and Seekers.

After you have activated all the Traps, you need to set up a Sentry Gun right at the face of the Barrier Hive and try to keep it going on. The Sentry Gun will prove to be really useful; even if you have not upgraded it to a maximum.

Cabin
Soon after clearing out the second Barrier Hive, the path to The Cabin will open up. After entering The Cabin, you will encounter a Rhino. It is not necessary to kill it at this point, but you can do so to practice a little.

When you get to the Cabin-A, you need to place a Sentry Gun at the wooden stairs. Using Team Boosters at this point help you a lot by reducing the reloading time of your LMG.

After you Drill reaches 50% completion, Rhino will appear. You need to lure it in front of the Sentry Gun to inflict some extra damage and keep on moving to evade its attacks.

Cabin-B is easily the most difficult hive of The Cabin as it is in an open area. There will be a few Traps in the area, but they will not be much of a help. You should place the Turret on the right side of the hive and activate all the Traps to make this a bit easy.

Depending upon your play style, Cabin-C can be considered as either too easy or too difficult. Since this hive is located in a barn, you will have a lot of cover and will be able to place your Sentry Gun in a much safe environment

Once you reach 75% completion with the Drill, a Rhino will appear. Once again, try to lure it in front of the Sentry Gun to inflict some extra damage. Furthermore, try moving up and down the barn ladder to evade the Rhino attacks.

Crater
The Crater has final two hives of the game, and you should consider completing them in alphabetical order. The Crater can be accessed via Cabin-B of the previous area. For Crater-A, place a Sentry Gun at the top of the cliff and stick to the upper areas to take out Scorpions and Hunters.

After clearing out the Crater-A, make to the Crater-B and spawn in a helicopter before placing the Drill. Furthermore, have a Sentry Gun (with Upgrade #4) near the hive and activate all the traps in the area.

You will be overwhelmed by Rhinos and Hunters. Just keep on replacing the Sentry Guns if they get taken out and worry less about money. Surviving the last hive will require you to activate the Nuke and return to the Evac Zone.

Nuke
You need to head to the Crater-B to activate The Nuke using a laptop and will have 5 minutes to return to the Evac Zone. Switch to your Pistol and keep on sprinting all the way back.

You will encounter two meteors blocking your path, which takes 30 seconds to vanish. During this time, you will get different sorts of aliens, and you will have to hold them off.

You will also come across a Rhino, but I would not recommend engaging it since and just running all the way back to complete the mission.

Once you reach the maximum level (Level 30) in Extinction Mode, you will get the ability to Prestige which reverts you to Level 1 but you will still have access to your unlocked Loadouts.

In addition to this, you will also get Prestige Relics which serve as a mean to make the game harder. There are a total of five Relics in the game:

While these Relics are enabled, you get more points for taking a hive out and will also unlock an Achievement/Trophy for completing the Extinction Mode with an enabled Relic.

Have we missed out on anything or would you like to add something? Do let us know in the comments below!