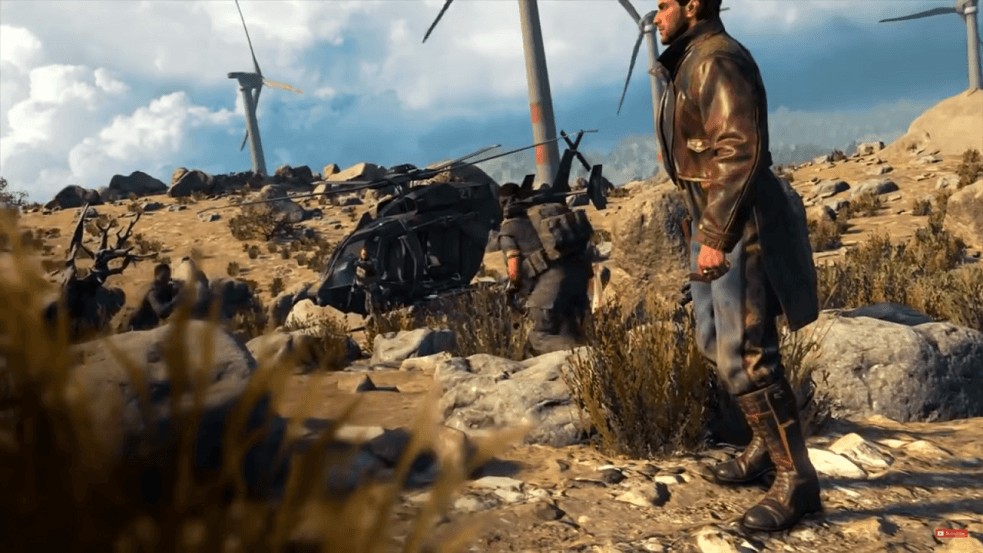 Activision just rolled out a new trailer for its private beta and also gave us a brief look at the Battle Royale mode called Blackout. While it is a very small teaser but it contains a lot of details and confirms Black Ops 4 Blackout Wingsuits and more.

Here we will be breaking apart the Black Ops4 teaser for the Blackout mode to rip out details like Black Ops 4 Blackout Wingsuits including of the Raid map, Cargo map and much more.

Blackout is the Treyarch’s take on the Battle Royale mode and the developers are very confident about it. According to Treyarch, Black Ops 4 Battle Royale is an experience that players can’t get anywhere else.

It is important to note that we will only be analyzing the test for Black Ops 4 Blackout mode not the entire teaser for the multiplayer beta.

Squads
Let’s start at the beginning of the Black Ops 4 Blackout teaser. As you can a squad of 4 players are moving towards a helicopter which we also see later in the teaser.

The characters in this scene are Diego(in the front) who is a new character from the upcoming Black Ops 4 Zombies mode, Seargent Frant Woods, Alex Mason (on the left) and we can’t make of who is right in front of the chopper.

The Tower
The juiciest Black Ops 4 Blackout details are hidden in the transition frames which very easy to miss as they appear for a split second. Right after the first scene, there is a transition screen in which we get out first look at the Tower that Treyarch showcased in the very first teaser for Black Ops 4 Blackout. 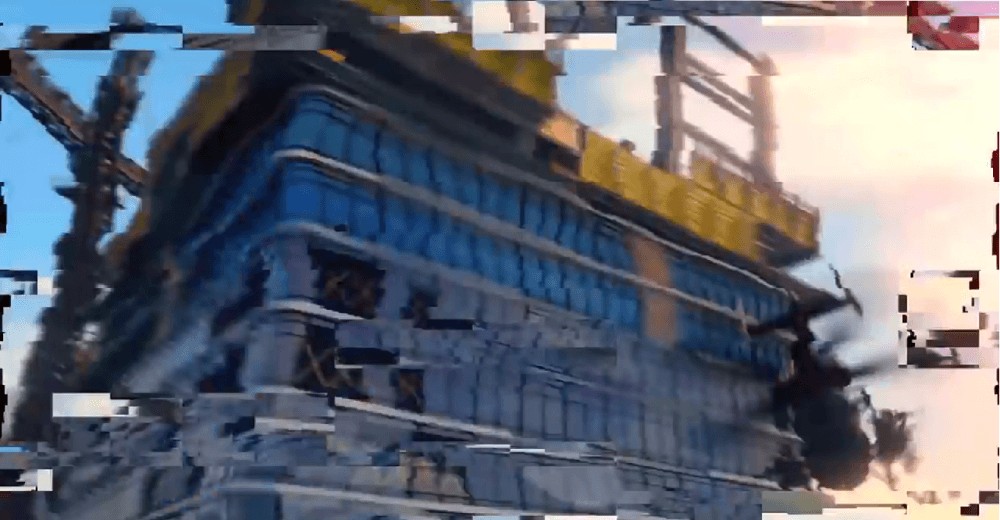 Also, don’t mind the quality of the image as it is a transition screen but we get our first look at The Tower which might act as a landmark for Black Ops4 Blackout.

Raid (Black Ops 2 map)
During the very next transition screen, we see a couple of characters fighting on Raid map which confirms the inclusion of Raid in Blackout mode. Raid is a map from Black Ops 2. 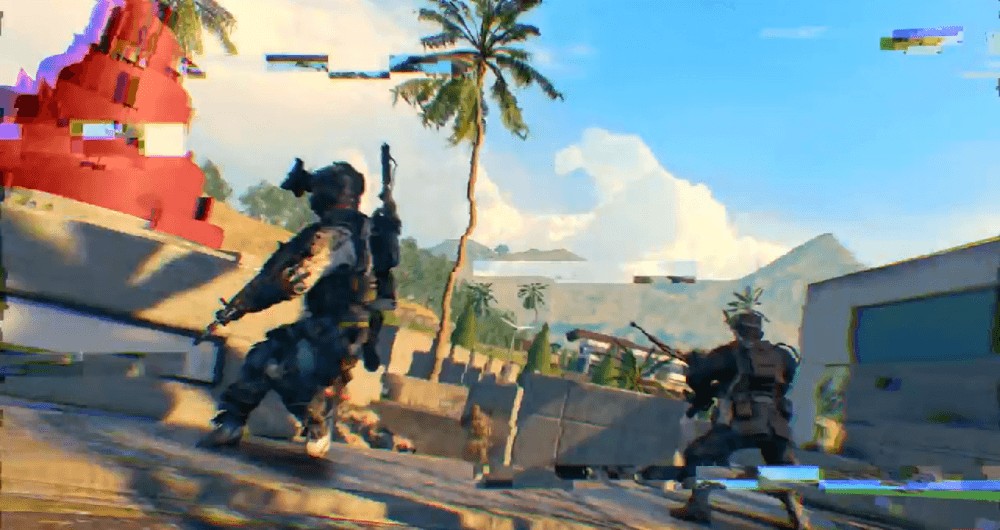 It also seems like Treyarch has brought the exact map into the Black Ops 4 Blackout mode along with red monument in the center.

Aside from the map, in this transition screen, we see Reckon specialist from Black Ops 4 on the left side and on the right we see Nikolia.

Vehicles
In this scene, we see another squad of four players running towards driveable ATVs confirming that players will be able to drive APVs. Also, a squad of 4 is coming to attack using the chopper. This is the same squad we in the start of the teaser. 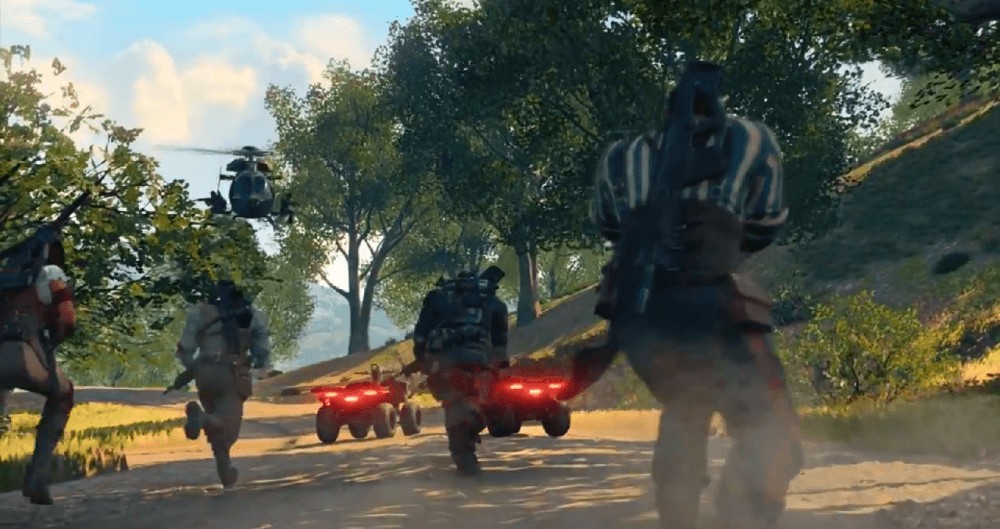 Wingsuits
Following that, just before Bruno is about to shoot at the chopper another transition frame appears. As we mentioned earlier, the juiciest details are in these transition frames.

In this transition frame, we can clearly see players gliding using the Wingsuits which confirms that Black Ops4 Blackout will feature Wingsuits. 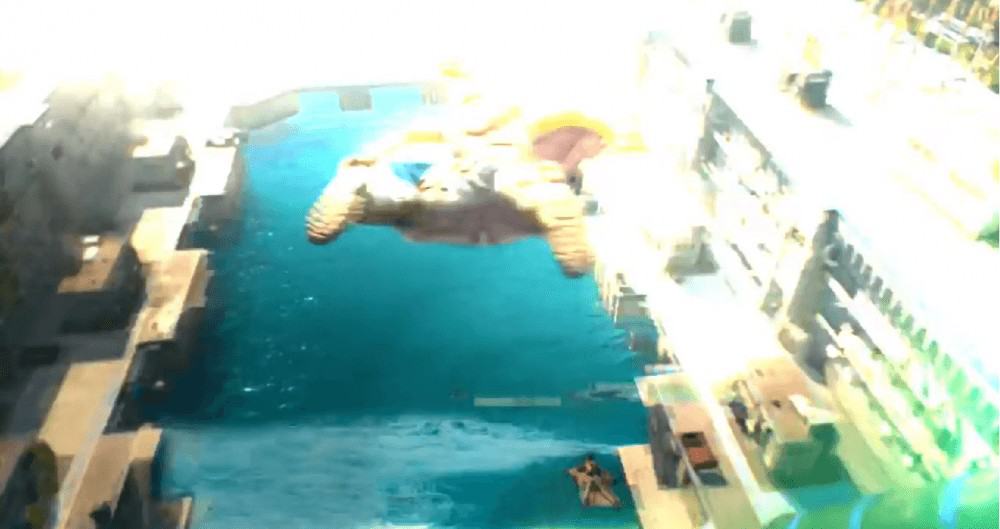 However, aside from this frame, nothing was showcased for Wingsuits. The players might be able to use these wingsuits while jumping from The Tower.

Also, these wingsuits could also be available to players like all the time to jump from tall structures like how parachutes work on Battlefield titles.

Blood And Gore
As the transition frame ends we see that Bruno has successfully taken a headshot of the player which has caused quite a splash of blood and gore. 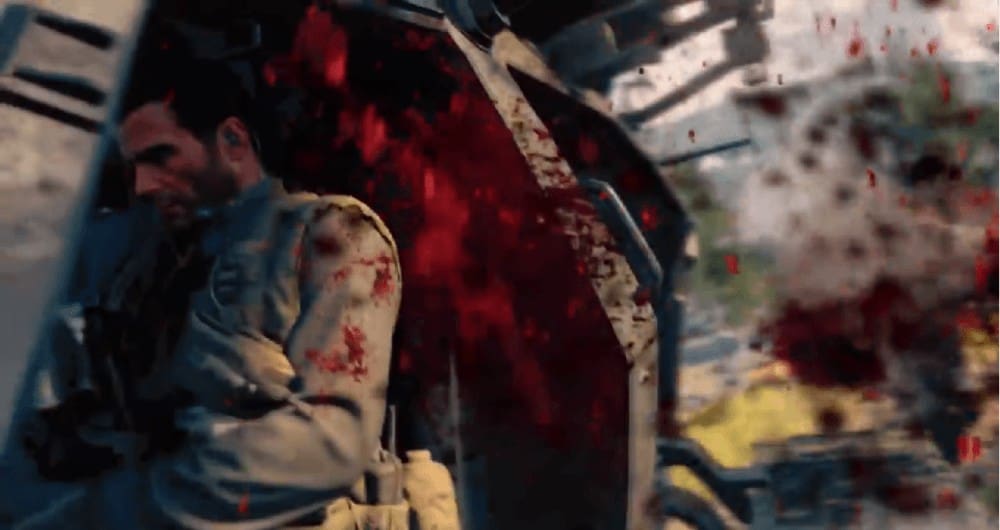 In the next transition screen, we see players navigating using a boat. However, in the back, we see a circular structure just like the one present in the Cargo map in Black Ops 2. This confirms that Cargo will be the part of the Black Ops 4 Blackout mode. 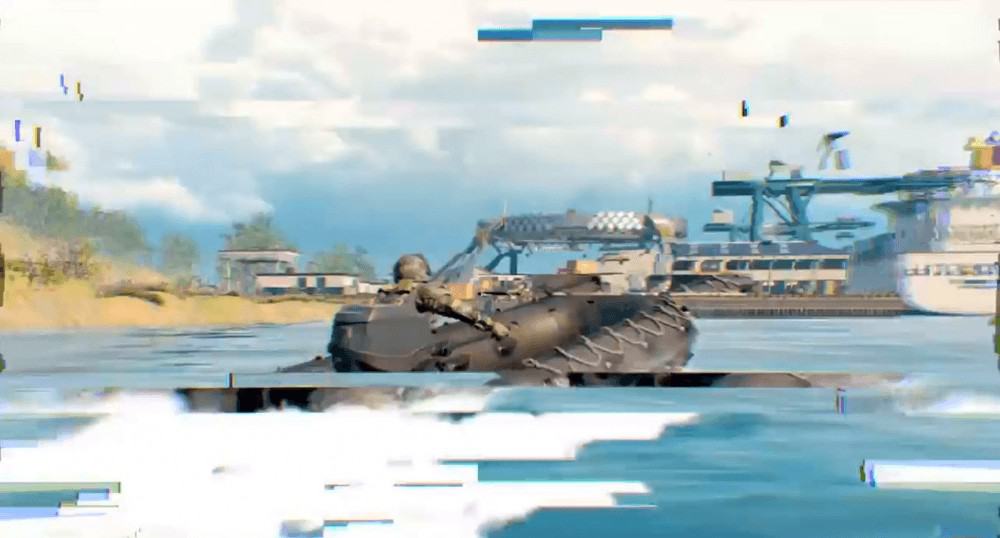 Vehicle Damage
In the next scene, we see players in the helicopter shooting at players driving the ATVs and the one in the front is actually getting damaged and then it explodes.

This confirms that vehicles in the games will not be indestructible and can be destroyed. 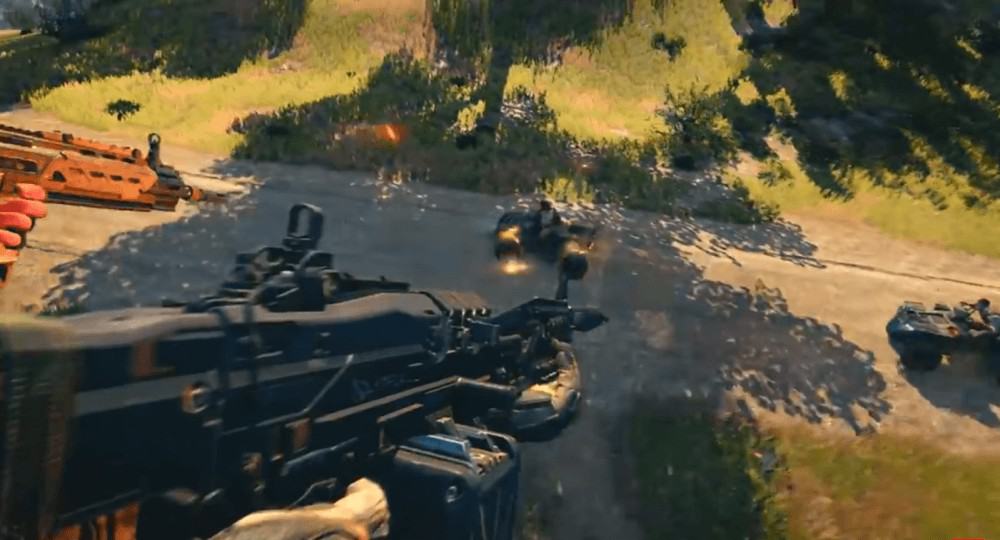 Underground Tunnel System
In the next transition screen, we see an underground tunnel which indicates that the Black Ops 4 Blackout will feature unground tunnel system. However, will it span across the entire map is unknown. 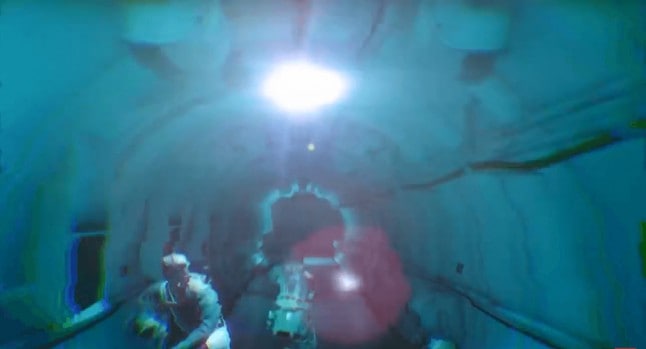 Nuketown
No Black Ops game can be complete without Nuketown as this map has been part of the Black Ops series since the first Call of Duty Black Ops.

Black Ops 4 Blackout 4 is not going to be any different from previous titles as Nuketown will be part of the Blackout. Also, this Nuketown is the destroyed map from Nuketown zombies. 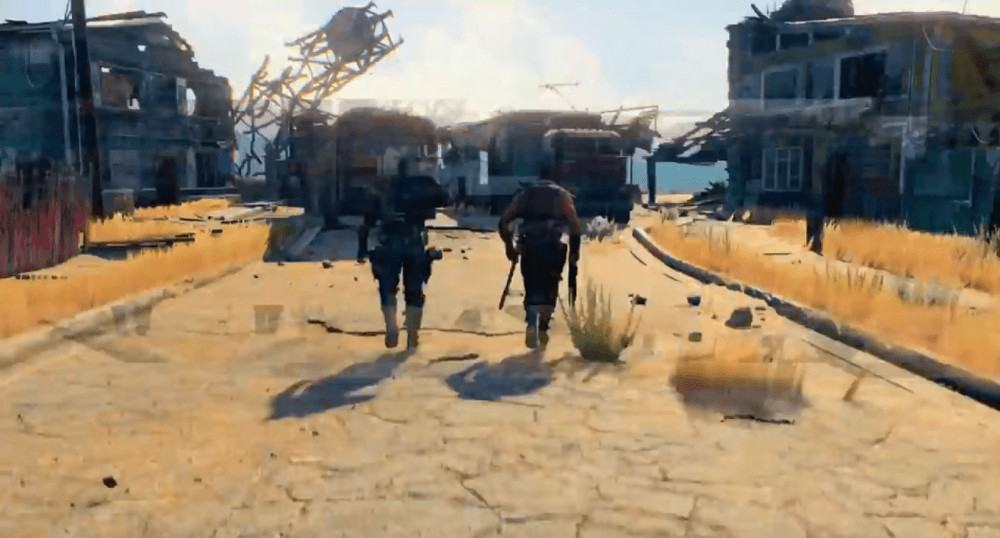 The Asylum aka Verruckt, Zombies
In the next transition screen, we also get our first look at Verruckt. Also, there are a few zombies on the left side which indicates that Zombies will be present in the Blackout mode. 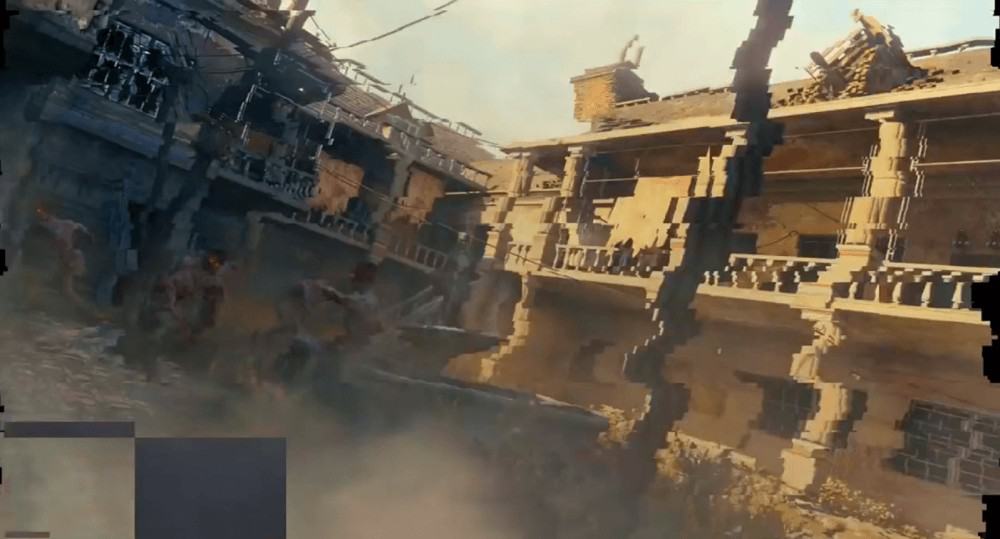 That is all for out breakdown of Call of Duty: Black Ops 4 Battle Royale mode, Blackout, teaser which reveals quite a lot like wingsuits, Nuketown, and more.